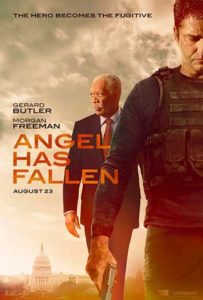 When ‘Angel Has Fallen’ even exists, you know something’s gone wrong with the movie industry. This is the inexplicable third entry in the ‘Has Fallen’ trilogy, a series of action films starring Gerard Butler, the first being a sort of Die-Hard-in-the-White-House scenario. The second one was some weird action film that was completely soulless. ‘London Has Fallen’ was in fact so bad, I not only gave it an appalling review, but it was considered one of my worst films of 2016. So, to see a third entry in this series is baffling because the film has no reason to exist.

The only big difference this time is the new director, Ric Roman Waugh, a former stunt choreographer, working on such projects as ‘Gone in Sixty Seconds’ and ‘Universal Soldier’ and even ‘Total Recall’. He’s since moved into writing credits, with such films as ‘In the Shadows’ and ‘Snitch’, both of which he directed, but this is his most high-profile direction job to date. Suffice it to say I did not go into ‘Angel Has Fallen’ with much high hopes, and I think I was justified in that.

The film is about an aging Mike Banning, played once again by Gerard Butler, who, during an exercise for the Secret Service, is ambushed by a rogue unit of drones which wipes out his whole team and nearly wipes out President Trumbell, played by Morgan Freeman. Leader of the mercenaries who is revealed to be his old friend and private military contract leader, Wade Jennings, played by Danny Huston, who seems to be working to his own goals in assassinating the President, however, after a failed attempt, Banning is set up to be the guilty party. It’s through sheer force of will that Banning is broken out and goes on the run in the hopes of finding the actual perpetrator. If that sounds familiar to you, then congratulations, you also saw ‘The Fugitive’, one of many films that this one will constantly borrow from. While I admit ‘Angels Fallen’ is probably one of the better films in this franchise since it’s not nearly as cynical and inept as ‘London’s Fallen’, it is not a good movie. My God, ‘Angel Has Fallen’ is a piece of crap, just like the entire trilogy.

The film sets out to be written with an interesting idea, one of an action star getting older, now relying on painkillers, his back giving out and him potentially suffering from some brain damage. It basically comes up with the idea that if someone would go on that long, their body could end up broken. But the fact of the matter is, the film never sticks with it. It’s actually kind of forgotten by about the 13-minute mark. As soon as the action starts, it’s a non-factor. The film is so inept in carrying out the plot that it really fails to warrant caring at all. There are a few scenes where Wade reconnects with his father, played by Nick Nolte, who’s a weird half-comedic, half-tragic character, and they never manage to strike a good balance in it. I’m not sure what direction Nick Nolte was given, but he seems to be trying his best at whatever the director wants him to do but the director has no idea what he wants out of him. Nolte might be playing up a comedic character but really should not have been, considering that his character has supposedly been traumatized by the Vietnam War which led him to walk out from his family.   Oh, and by the way, pretty much nothing I’m saying is spoilers – all of this is in the trailer. This is yet another film where the trailer gave away way too much of the movie. And for the love of God, if you want your villain to be a surprise, don’t cast Danny Huston! This film tries so many different tropes, but it doesn’t understand what made those tropes work in the first place. For example, the rivalry between Banning and Jennings has been done so many times, but it doesn’t get that you have to actually care about the characters to give you the sense of why two best friends trying to kill each other is tragic. And this film doesn’t bother building up any emotional connect in its characters, especially considering that Jennings is a new entity that has just been added into this film. They also added an extra “surprise” villain who, if you don’t guess who it is before it’s revealed, you’re really not trying as it’s never left ambiguous in any way. The film tries some weird take on current American politics, but it only feels out of place and will obviously date the movie horribly, even though it’s tying into what will most likely be something that we will be talking about for quite some time. It also leads to one of the most insane shots I have ever seen in my life. Really, the person who did that shot at the end of the movie, I hope they got paid a lot because the fact they were asked to do that in the first place means that they’ve suffered enough.

Despite the fact that it’s the third entry, the only actors to reprise their roles are Gerard Butler and Morgan Freeman, though they’re not really much in character from those prior films so you’re unlikely to be able to connect them to those roles. In fact, I actually didn’t know that Banning’s wife had been recast between films until after the fact (thank you Matthew Buck for pointing that one out). And this film is one of the most wasted casts I’ve seen, including Tim Blake Nelson in the role as the Vice President, and a very thankless Jada Pinkett-Smith who really doesn’t get to do anything. What a waste of a talented actress who was also being set up to be a big part of the film. Not to mention everyone looks like they’re bored out of their skulls; this film really feels has a lack of enthusiasm going on throughout it.

But the worst part about ‘Angel Has Fallen’ is the action. Credit where credit’s due, it looks like a lot of effort was going into some practical stunts and practical effects -minus some of the terrible digital effects that were used- but good God, there are two things that drag this film down, the editing and the lighting. The editing is some of the worst editing I have seen in an action film in recent memory, so much so that I am staggered they were allowed to get away with this. There are so many quick cuts, so many close-ups and so many camera cheat tricks. This is stuff you could only get away with 10 years ago, and we were still complaining about it back then. What’s worse, it looks like some real effort went into some of the stunts for this film, but the editing completely wastes it. Oh, and by the way, this is one of the darkest films I’ve seen in a long time, and I don’t mean that in a metaphorical sense, I mean it in a literal sense. So much of this film is shot at night with barely any light, and it’s unbelievable how bad it is. I could barely see anything that was happening, let alone the action, and I’m not exaggerating – I had to squint at moments to tell what was going on! This film gave the last ‘Fantastic Four’ movie a run for its money in how dire the lighting was. The whole time I was watching I was begging, pleading for at least part of the film to take place in the daytime or somewhere where there was some light. By the time that does happen, it’s too little too late, and continues to be edited appallingly.

‘Angel Has Fallen’ is an earnest attempt to try to improve the franchise but it squanders through some of the most appallingly shot action I have seen in a long time. This level of ineptitude deserves Razzie nominations, it’s that bad. If you’ve been invested in the ‘Has Fallen’ films and you still haven’t given up at this point then more power to you, please go and see what you can of this disaster. I think even the small amount of fans that actually exist for this inexplicable franchise are getting sick of this and will likely not be able to connect since, if it wasn’t Gerard Butler playing the lead role, you would barely be able to connect this with the other two films. Every cast member is wasted, every performance is underdone and undersold and the script is baffling in how much is ripping off much better works with no flare of its own. This hopefully is the end of the ‘Has Fallen’ franchise, and if it is, goodbye and good riddance.

Well that’s it for another week. Next week I will be reviewing the latest one from the minds behind ‘Sicario’, the new release, ‘The Informer’. With all that being said, thank you for reading this review, I hope you enjoyed reading it as much as I enjoyed writing it.
Calvin – Nerd Consultant
Share This Post: