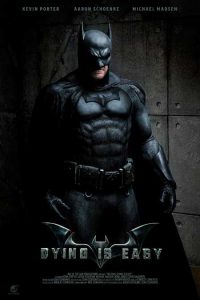 I promised I’d talk about something positive this week and I intended to stick to that. And, well, everyone’s talking about the fact that this review will be coming out one week after the Snyder cut of Justice League has finally been released. Now, I haven’t watched the Snyder cut—it’s exclusive to Sky Television customers at this point and I don’t fit into that category so I’ll be waiting quite a while. So, I wanted to talk about another thing that came out which I’m worried is going to get lost because of the Snyder cut.

Bat in the Sun Projects who are well known for doing the show Super Power Beat Down finally produced another fan film for Batman, naming it Batman: Dying is Easy. While they have also done another Batman film called City of Scars which I’d highly recommend checking out, this does not follow on from that movie. It’s essentially its own project, though the actors that played Batman and the Joker do return to reprise their roles this time around. Now, this will not be a very long and in-depth review, mainly because the entire project is only 25 minutes long and I’m bound to spoil a whole bunch of things if I do. So, I’m going to preface right now that while this won’t be a spoiler discussion, I absolutely will say right off the bat I recommend you see this film; it’s absolutely brilliant. You can watch it on YouTube right now for free.

But if you want a brief plot synopsis, it basically surrounds Batman, played by Kevin Porter, who during a mission is searching for three missing police officers. He visits Detective Bullock played by Michael Madsen who informs him that the Joker, played by Aaron Schoenke, is dying of skin cancer and his final request is that Batman come visit him in Arkham, something that Batman takes up. And from there the film becomes essentially one long conversation between Batman and the Joker, and the idea of it is amazing. Without going into too much detail, it’s very reminiscent of the conversations they have in The Killing Joke; in fact, The Killing Joke is referenced quite a few times, with the Joker almost goading Batman into getting the last laugh on him. He once again has a belief that he has nothing to lose. I mean, he’s going to die anyway; he might as well go all out. Kevin Porter once again nails being Batman; it’s a role he’s played a few times on Super Power Beat Down so he’s had more chance to get used to it. And, once again, I really love the costumes that Bat in the Sun design. I don’t understand why we’ve never had the grey Batman suit in the films other than when Ben Affleck was in the role. Although, I think the reason why is probably to avoid drawing comparisons with the Adam West costume.

My other big thought about the film is that this is one brilliant Batman and Joker encounter. Sure, it’s not on the level of something like, say, Batman Beyond: Return of The Joker but it’s very hard to top Kevin Conroy and Mark Hamill. Aaron Schoenke also directs the film and wrote the screenplay and you get a sense that he really understands these characters and the dynamic between them. I’m not going to fault the special effects of this film because, well, they were funding this thing on Indiegogo—it was never going to look amazing. But compared to a lot of fan movies that you see online, this is one of the best-looking I’ve seen. Okay, some of the long shots of Gotham don’t look so good but Arkham is really excellent. But all that pales in comparison with the action scenes. Yeah, there are some good action scenes in this one, including a fight in a house early on against the Mad Hatter and his goons. That brings up another point: they actually did a pretty good job bringing in a few cameos for a lot of Batman’s Rogues Gallery. People who played the Arkham videogames will probably feel a sense of nostalgia as a lot of the looks and dialogues really reflect those games.

If there’s one thing that kind of pulls the film down for me it’s the fact that it’s a bit short and I would’ve liked a couple more action scenes, mainly because, between Super Power Beat Down and Batman: City of Scars, we have that they are very, very capable of making great action scenes. And to see it rather confined and conflicted this time feels a bit off, so I would have liked the film to have had about five or ten more minutes to show off maybe another instance of that, but I also get the fact that this is clearly meant to be a more confined film about confronting death and what you will leave behind. The end.

If I haven’t stressed it enough, do check out Batman: Dying Is Easy—it’s an excellent film. And as I mentioned, it’s only 25 minutes so if you’re not really up for seeing a very long film this is an excellent one to put forwards for a late-night, just-before-bed viewing.
Calvin – Nerd Consultant
Share This Post: