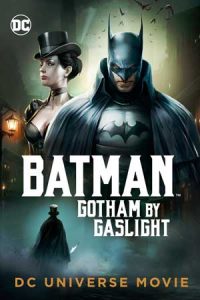 Whilst this isn’t the first DC animated film to be an elseworld story, it’s the first one to be based on an existing elseworld storyline. The concept of an elseworld is that you take familiar characters but change them around or place them in a situation not unlike their own situation, very different to what you would expect. Such as, Superman Red Son which imagined Superman landing in Russia as opposed to America or Batman and Dracula Red Rain where Batman becomes a vampire. In fact, Batman is often the target since his world and cast of characters really suit it well.

Gotham By Gaslight was the very first elseworld story so it makes sense to adapt this one first, with Sam Liu returning to direct. I was wondering how DC were going to adapt Gotham By Gaslight, seeing as how it’s such a short comic, not really conducive for anything outside of an animated short, possibly thirteen minutes long. So, it was obvious that the source material was going to be stretched to fit the one hour ten minute running time.

With all that being said, how did Gotham By Gaslight turn out?

Gotham By Gaslight is a very simple story. The streets are being stalked by a killer calling himself Jack the Ripper and on his trail is Batman, played by Bruce Greenwood as well as a cabaret performer Selina Kyle, played by Jennifer Carpenter. Batman works hard to unmask the identity of the Ripper and prevent any more murders from taking place. Yes, it is a very simple story, it’s basically Batman in a Victorian version of Gotham hunting down Jack the Ripper.

For someone who is very knowledgeable on the subject of Jack the Ripper, I was very interested to see just how well researched the movie is. There are certainly a few Easter Eggs for people familiar with the subject. But the big question really is how would they adapt the graphic novel. Well, considering how many changes have been made from the graphic novel, I would say remarkably well. The biggest changes are several character additions, that simply were not in the original novel, such as Hugo Strange, Selina Kyle and Poison Ivy, the latter of which becomes a murder victim. It also accomplishes what the graphic novel achieved, was not to dis-enhance how brutal Jack the Rippers crimes were. He still kills street prostitutes in horrific fashion and there is actual commentary on the times. However, I also feel some people will be a bit annoyed by a lot of aspects of the case, considering how this one is very different in many ways to the actual case. No while the film does do a good job of implementing a Victorian era of Batman and actually managed to amazingly not resort to over-use of steam punk gadgets, it does also have a lot of interesting ideas of how to work the characters. For example, Selina Kyle, they go for a proto-suffragette role which would not be out of place with the woman who becomes Cat Woman. Hugo Strange has delusional ideas of mental health treatment that wouldn’t be out of place in the time and there are all sorts of talks about them being on the cusp of new technologies with the turn of century coming soon.

Overall, I would say this is a pretty good Batman story. They certainly play up the investigative side rather than the vigilante side, which is pretty apt considering there is only one villain in this one. I personally felt that I liked the rivalry between Batman and Jack the Ripper. Overall, it’s a very well-crafted story. I think this is one of the best version of Selina Kyle in a long time for example and I was thoroughly amazed at the animation which has lovingly recreated the comic and setting. Plus, the soundtrack is brilliant, suitably fitting the time, including an excellent musical performance in the middle of the film. The animation also does an excellent job of doing some great action scenes, which certainly do not feel out of place with typical Batman movies, however, it also manages to work the environment of the Victorian period in very well.

Gotham by Gaslight also has a terrific cast, including Bruce Greenwood reprising his role as Batman, who you probably recognise as playing the character in both the Young Justice TV series and in probably my favourite Batman movie ever, Under the Red Hood. He once again gets back in the role brilliantly, he is probably the best actor to play the role outside of Kevin Conroy. Jennifer Carpenter makes an excellent Selina Kyle and is one of the best actresses to play the role. Special mention should go to Anthony Head, who you may recognise as Giles from Buffy the Vampire Slayer, Mr Finch in Dr Who, The Prime Minister in Little Britain as Alfred Pennyworth, and he is actually really great at this role. He should seriously be considered for playing this role in the future, he is absolutely great in it, the problem is he is not given enough scenes to really work it but I was actually surprised as to how well he did. Scott Patterson from the Saw movies does well as this world’s version of James Gordon and I really liked Uri Lowenthal as Harvey Dent. In fact, most of the cast are made up of typical voice actors, such as John DiMaggio, who plays Chief Bullock, Tara Strong in multiple role and some particularly great performances from Kari Wuhrer.

Now, that being said, at this point I do have to go into some negatives because Gotham By Gaslight has a couple of them.

For a start, despite the fact that they actually did adapt the comic well I don’t think the design of the Bat suits for this film translated very well and I think it would have suited better sticking closer to the comic. I also think the ending is amazing. The movie gives several red herrings to the identity of Jack the Ripper and when it finally decides on one, well granted it’s a decent twist and we never see it coming, there were no sole hints throughout the film that suggested this was a possibility. Though it does lead to some excellent scenes, it’s ultimate good idea, you should have built it up a bit more. There is no real “ah ah”  moment, it’s like “ok what” ! Plus, this has one of the most abrupt ending of any DC animated film. It doesn’t really conclude, it more just ends with several plot points left dangling.

As a result, the film does an amazing routine before it fails to stick the landing and it’s a dam shame because Gotham By Gaslight was potentially one of the best DC animated films to date. It this is to set a new trend for DC animated to produce more films based on their elseworld, I would be completely for it, since Gotham By Gaslight is a pretty decent film with some very good action and very good characters. I would have said it was an excellent film if it’s ending had been slightly better, but as is, this is still a good film that I would recommend you check out. I personally would like to see a film like Superman The Red Son get developed and if you are worried about going into this film if you have a squeamish nature, don’t worry this film never goes all out with the gore.

The DC animated films return later this year with a Suicide Squad film, which I have some expectation for, but considering how badly the Suicide Squad is being handled at the minute, I wouldn’t get your hopes up.

Well, that’s me done for another week.

Next week I will be taking a look at one of the films that has most perplexed me since I have seen the trailer for it, since I can’t decide whether I reckon it’s going to be a good or bad film, but I am certainly very curious to see how it’s done. Next week I will be reviewing Game Night.
Thanks a lot for reading my review. I hope you have enjoyed reading it as much as I have enjoyed writing it, now don’t let anyone who watches Jack the Ripper documentaries watch this film, they will blow a Gasket!!
Calvin – Nerd Consultant
Share This Post: