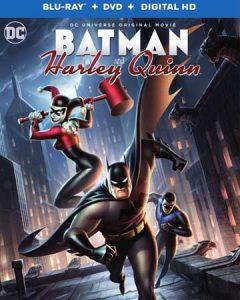 So, yes, there is another DC animated film out and, rather like the Killing Joke last year, it did get a brief cinematic release, despite the fact that the film did not meet the requirements to receive a cinematic release. In case you are wondering, they tacked on a load of ‘behind the scenes’ footage and creators talking about the creation of Harley Quinn on to the end of the film in order to pad out the run time to meet said requirements. The film once again is directed by Sam Liu who seems to be one of the revolving directors behind these DC animated projects, but it’s very clearly a Bruce Timm story, he has developed the story and co-wrote the screenplay with James Krieg, and as you well know, I personally believe Bruce Timm is one of the best creative staff that DC has working with them.
Now Bruce Timm didn’t have a brilliant outing last year when he produced the Killing Joke, but this one felt like he was going back to his roots, it looked like it would be a harken back to the 1990’s Batman animated series which was one of the greatest shows ever made and once again, Kevin Conroy would be returning to the role of Batman. Though, Harley Quinn is getting to a stage where I think she is getting a bit over played by DC, they seem to be wanting to turn her into DC’s answer to Deadpool, and while there are similarities between the characters I don’t think it’s a real ‘apples to apples’ deal. I often think Harley Quinn works better when she is put into a more serious tone. However, I went into this with a fresh mind to see how well this could do and could this stack up with the two really good DC animated films that have already come out this year?
Batman and Harley Quinn is a very simple story. Jason Woodrue, aka Floronic Man, (played by Kevin Michael Richardso)n along with Poison Ivy (played by Paget Brewster) are stealing technology in order to create a new formula to turn all the worlds people into animal plant hybrids. They are pursued by Batman (played by Kevin Conroy) and Nightwing(played by Loren Lester) but are getting nowhere with their associates. With nowhere else to turn, they turn to Harley Quinn (played by Melissa Rauch) to find Poison Ivy and potentially stop her.
Ok, simple question, did you like Batman the animated series? If the answer is yes, they you will like this, it’s kind of an extended episode, though in reality, it’s not quite. At times it certainly does feel like that, however, at other times it feels a bit too goofy to be like that. That’s one of the biggest issues I have, this film has a massive tonal shift issue. They are trying to take the upbeat idea of telling a Harley Quinn story and mix it with the darker elements of telling a Batman story. That being said, however, you will be very surprised to find out it doesn’t have as much of a tone issue as I was expecting going in. In fact, I felt this film was really good. In reality, Batman is only along for the ride, this is a Harley Quinn movie in every sense of the word. Harley is pretty much in control of everything from start to finish with this film and while personally I think she has gotten to a stage where she is a bit overplayed, it kind of works in this scenario. The film ends up becoming a real love letter to the character.

So how do I think the whole thing stacked up overall?

Only one mini review this week

was what I wanted to say because I did manage to see the Netflix Definite series, however, I just released an anime amigos blog on it, so if you want my thoughts, along with my friends Reece Imlioeck, Elliott Chapman and Ren Bromiley, you will have to check out that video, though be warned we are going to go into spoilers on that one, but we will give you a warning and we will go through our thoughts on the film without spoiling it beforehand.
Come back next week where I will be reviewing the latest Victorian horror drama “The Limehouse Golem”.

Thanks a lot for reading my review. I hoped you enjoyed reading it as much as I enjoyed writing it and I am going to go back and watch Batman the animated series now.