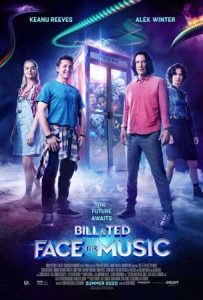 “BILL AND TED FACE THE MUSIC”

You know what? In spite of the fact I do like the first two Bill and Ted films, I was not overly excited to hear that there were plans for a revival of the franchise. But that being said, these days anything coming to cinemas I will take it, though my resolve was further strengthened by the fact that the film brought on Galaxy Quest director Dean Parisot to direct. And to be fair, they did manage to get the majority of the original quest back in to reprise their roles, including Keanu Reeves and Alex Winter as Bill and Ted. But now, I went into this film on opening weekend, but I suspect it will not do too well at the box office given that my screen was virtually empty.

But with all that this film has working against it, how does it turn out in the end?

Well, the basic premise of the film is that it’s grown-up versions of Bill and Ted, once again played by Alex Winter and Keanu Reeves, who despite having some success with the wild stallions have not created the one song that will unite the world. The only difference is that they’ve now been transported to the future by the great leader, played by Holland Taylor, along with Rufus’s daughter Kelly, played by Kristen Schaal, because apparently now if they don’t write that song within 75 minutes all of time and reality as we know it will collapse. Yeah, if you know what a Bill and Ted story is, you know what you’re in for. The thing that really made me happy about this film is that it’s not overloaded with cameos. Have you ever noticed when they do these revival stuff like the Absolutely Fabulous movie, they overload the film with cameos? I mean, look at that one. And none of them really serve much of a purpose. The only cameo in this film is Dave Grohl of Foo Fighters fame, and that actually serves a purpose.

It’s once again a time travel story but this time the time travel aspect is that Bill and Ted are trying to learn the song from themselves since they obviously must have written it so therefore they can just go ask themselves, and of course it’s not stealing because it’s from themselves. Their logic, not mine. The only thing I will say is despite the fact Keanu Reeves and Alex Winter have obviously moved on to other things, they seem genuinely happy to be back in the role. I don’t get a sense from them that there’s a look of, well, it was a good paycheck. And they do give some time to other cast members. One of the big differences this time is that Bill and Ted now each have daughters, Thea and Billie, who are played Samantha Weaving and Brigette Lundy-Paine, who also have their own subplot of travelling through time to form the greatest band ever to help perform the song, and it surprisingly had some of the best moments of the films. And it’s what this film does great: it recaptures a lot of what the old films had. It’s wacky and there’s no sense of cynicism. And honestly, the positivity vibes from this were great. There’s genuine character progression and there’s a great solution at the end. I know this film’s script is kind of all over the place, but you know what other scripts are all over the place? The first two Bill and Ted films! But they run with the idea of the scripts being all over the place so it kind of weirdly works.

The one thing that hasn’t really improved and actually kind of looks a bit weird are the special effects – the computer effects in this are not great if I’m honest. But I think they’re supposed to be trying to replicate the cheap feeling that the original films had. Obviously Kelly is a character introduced here because, of course, George Carland is no longer alive so he can’t reprise the role of Rufus, and yeah, I think it was a smart decision to create a new character rather than recast Rufus. Face facts, George Carland is larger than life, and it would really have been very hard to see someone else in the role. As for the gags, well, I don’t think they’re quite as funny as the previous films but there were some moments that made me genuinely laugh, and the film is a pretty damn good comedy all things considered. I thought some of the funniest scenes involved the new character who’s a couple’s therapist, and again, it’s unlike a lot of comedies I’m seeing right now.

There’s, again, no sense of cynicism. It just feels like a film that’s happy to be around and it also doesn’t feel entirely like a nostalgia trip. There are a few callbacks to the other films, but it never feels like it’s directly trying to ape the originals or trying to point out how stupid the originals were; it just feels like a continuation. And as a result, I came out of this film feeling happy! Bill and Ted Face The Music really genuinely made me feel happy. It’s a genuinely good movie, and I don’t think I’ve seen a film that’s based on one of these old properties that we’re trying to bring back that felt more like it had a reason to exist. I think this one can stand quite well with the first two Bill and Ted films. I think probably on a few technical levels it’s the weakest film of the trilogy but it’s still the weakest of a good bunch. And everyone looks like they’re genuinely enjoying themselves.

I’ve deliberately left out a bunch of this film just because I want people to actually go and check this one out. If you’re not in a local lockdown and you’ve been wondering what film you want to see in a cinema that’s going to make you feel happy, this is the one to do it.
Calvin – Nerd Consultant
Share This Post: