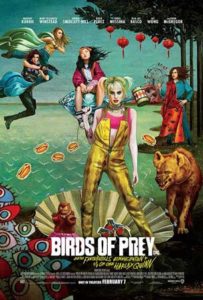 Birds of Prey is the latest film from the DCEU after taking quite a significant break after last year’s Shazam. The DCEU is in a bit of a weird quandary at the minute. While their films have been improving in their schedule now, suggesting they’ll be able to get back to the state of releasing multiple films a year to compete with Marvel, this being the first year that they’ll release two films since 2017. Next year they are set to release three. The thing is though, the DC films haven’t really set up an end game at this point and I mean that in both a figurative and literal sense.

There’s no announcement for a Justice League follow-up and it doesn’t seem like the films are actually building to an Avengers Endgame-style movie. Considering that every Superhero film franchise is now going to be following on from that, that might be a death sentence for a lot of films. When Birds of Prey was announced and went into filming, I was both skeptical but optimistic. For one thing, this meant DC was now going to beat Marvel to bring out their premium female Superhero team, something that would be beneficial because if this film is proved successful, Marvel might likely bring out a similar film to capitalize on the success, possibly even A-Force.

The thing is though, Birds of Prey is not exactly the most popular comic in DC’s line, and it does seem like they’re trying to aim for another similar success of taking a lesser known character and propelling them up, similar to how Marvel did with Guardians of The Galaxy. Thing is though, Guardians of The Galaxy was a real lightning in a bottle – it’s the right director, the right cast, the right script at the right time. I wasn’t sure Birds of Prey could pull all that off, though the smart choice was to bring in Cathy Yan to direct. Her early feature prior to this was the well-received Dead Pigs, an excellent Chinese action film that I’ve heard good things about. The point is though, she’s used to making R-rated action films, something that’s probably going to suit this film since it was also announced that the film would receive an R rating, the first of the DCEU films to do so, something I suspect will also be going into the upcoming Suicide Squad film.

So, how does Birds of Prey work out? Well, Birds of Prey is basically the story of Harley Quinn (played once again by Margot Robbie) breaking up from the Joker, and after a very loud announcement of this, realizing she’s lost the protection she held whilst being the Joker’s girlfriend and now every person she pissed off in the city is out to kill her, including Roman Sionis aka The Black Mask (played by Ewan McGregor). But the Black Mask also has problems with several other people: Cassandra Cane (played by Ella Jay Basco) who has something he wants; Helena Bertinelli aka The Huntress (played by Mary Elizabeth Winstead) who’s killed a lot of his associates; Dinah Lance aka Black Canary (played by Jurnee Smollett-Bell) who’s acting as an informant to the cop building a case against him, Renee Montoya (played by Rosie Perez). Though, frankly, this isn’t really a Birds of Prey story; it’s a Harley Quinn story featuring the Birds of Prey. I personally have a bit of objection to the direction that Carly Yan’s taken with some of these scenes. It seems like they’re trying to turn Harley Quinn into their answer to Deadpool most of the time and it’s not something that entirely fits her character. Yes, Harley Quinn is quite goofy but it’s a bit hard to enjoy her goofy antics when you remember that she’s the product of an abusive relationship.

If anything, Birds of Prey however is probably the most well-executed Harley Quinn story in a while. Birds of Prey is there basically to introduce a bunch of new characters into the DCEU to make this not just a Harley Quinn film. This isn’t exactly the premier line up of this team, though the fact that the majority of the characters are from the Batman part of DC Lore is rather accurate – this is mostly a Gotham City based Superhero team, with a few exceptions. In fact, the only real exception to this is Black Canary who’s from the Green Arrow stable of books, and possibly Huntress depending on who you ask. If the goal of this was to introduce us to a bunch of new characters and take a lot of B-list characters to new heights, similar to what Guardians of The Galaxy did, the interesting fact is that as far as I recall, only one of these characters hasn’t appeared in big DC projects, that being Renee Montaya. Huntress and Black Canary both appeared in Arrow and lots of people know who Harley Quinn is. So, as a result, this film has seemed to be a reintroduction. I’d say Huntress is probably goofier in this one than she was in previous adaptations. Cassandra Cains is also very different from a comic counterpart, and her depiction is probably going to piss off comic purists the most. People who actually see this film might be surprised to find out that she was Batgirl in the comics at one point. Honestly, if you really like comics, go read Cassandra Cain’s Batgirl series, it’s really good. It does bother me on a couple of levels but I actually kind of like Cassandra Cain’s character in this one and her relationship with Harley is really interesting.

But one of the weird factors is none of the plots really converge with one another – this is a film that almost has 4 separate plots going on that only converge at the very end. In fact, most of the clips of Birds of Prey that I’ve seen circulating talk shows with the actors’ appearances on have actually come from much later in the film than you’d expect. It’s not as bad as Josh Trank’s Fantastic Four where there’s barely any interaction between them and there’s been virtually no characterization so the team up towards the end of the film actually feels unwarranted, but I kind of want to wish they’d had more time with the Birds of Prey and ultimately, Harley Quinn gets most of the action. This leads to most of the other characters feeling like support roles in her story. That being said, if you’re going to have it be that way, at least make it a good story. And it is actually, all things considered. They do a pretty good job with Harley; they even give her a decent arc in this film. I actually would really like to see more of this take on Harley Quinn.

That being said however, the Deadpool influence is definitely here. If anything, this film doesn’t feel similar to Guardians of The Galaxy, it feels more like Deadpool. Now, that’s a bit of fair comparison since Deadpool was the first really successful R-rated film based on a comic and every film that’s come out since has been put in its shadow, with the possible exception of Logan. This one really felt like the Deadpool influence was there, especially with a couple of the fourth wall breaking gags in the film, and the fact that Carly’s narrating most of the plot also didn’t really help with the comparisons. That being said, the R-rating is actually rather conservative this time around. It’s mostly reserved for bad language and a couple of gorier scenes, but the gory scenes aren’t the absolute worst and I actually think they’re a bit tamer compared to any of the Deadpool films. Make of that what you will.

You’ve probably noticed I haven’t been talking much about the villain, Black Mask, who, I must be honest, I was quite surprised was chosen to be the villain of this film. I would’ve thought they’d save him for a solo Batman film but again, the Birds of Prey is mostly a Gotham based Superhero team, so it probably makes sense to have Gotham based villain. And Black Mask, he’s done alright. He’s not exactly like he is in the comics, but Ewan McGregor definitely does play him in a rather intimidating way. I just wish he wore the mask more. I suspect the fact he doesn’t wear the mask for most of the film is to take full advantage of the fact that they’ve got an A-list star in the villain role. Let’s face it, outside of Margot Robbie, Ewan McGregor’s probably the most famous person in this film. That being said, at times, he does kind of slip into that whole thing that a lot of the Gotham-based villains seem to slip into: diet-Joker but with a bit more of an essential plot. They at least keep down the fact he’s a very intimidating Mafia boss well.

Birds of Prey is an alright film. I actually think it’s quite indicative of the current upward trend that the DC films are taking at the minute. It’s actually a good sign of things to come since there are hints that this franchise will continue beyond this, and I really would not be opposed to a sequel. I’ve heard this film described as a big budget girl gang movie, but I think that description is doing the film a bit of a disservice. I’d more say it’s like if Quentin Tarantino did a female Superhero movie, especially with the weaving plotlines that all eventually converge together. Comic purists might have a few problems with this one, but I actually think these new versions of some of these characters are alright. If you haven’t seen this film, I recommend checking it out. It’s not the best thing I’ve ever seen but it looks like it’s doing a decent job and hopefully parts of this will go into James Gunn’s upcoming Suicide Squad film which Margot Robbie is set to be in to reprise her role. The DCEU is back blazing this year with Wonder Woman 1984, and I’m certainly excited for that one.

Speaking of excitement, next week I review probably one of my most anticipated films of the year as I check out Paramount’s adaptation of Sonic The Hedgehog. All that being said, thanks for reading this review. I hope you enjoyed reading it as much as I enjoyed writing it.
Calvin – Nerd Consultant
Share This Post: