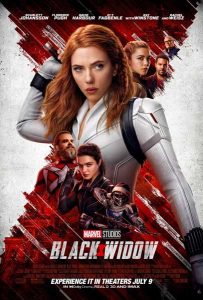 Black Widow is the first Marvel Cinematic Universe film to come into cinemas since Avengers: Endgame, and honestly it felt brilliant to see these films in cinemas again. Granted, this hasn’t really been the triumphant return to Marvel after the Endgame concluded what was an over 20-film story arc, mainly because Disney decided to air the TV series for this phase on Disney Plus during the pandemic, and you can definitely tell that Marvel Studios really intended this to be the first thing out of the gate post-Endgame. The fans have been demanding for years that Black Widow get her own film, despite the fact that out of all the Avengers that have so far been in the movies, she wasn’t the only character not to get her own film. Hawkeye still hasn’t had his own film, and Vision didn’t get their own film but later got their own TV series. But considering how much the Marvel Universe has been expanding, it more than made sense to give Black Widow some love.

People were wondering how Marvel would kick off things after such a big moment like Endgame. The answer is they did do the smart thing: they kind of didn’t go big. Black Widow is what would best be described as a Marvel filler film; it doesn’t really add much to the grand storyline. It’s just a small film to tide you over between films. Think the Antman movies or the Spiderman films. It actually takes place between Captain America: Civil War and Avengers: Infinity War. Black Widow, played once again by Scarlett Johansson, is on the run, and after obtaining some information she reunites with her sister Yelena, played by Florence Pugh, who informs her the infamous Red Room is still active. As Natasha puts it herself, “I haven’t got anything better to do,” so they decide they’re going to take it down with the help of their parents, Alexei (aka Red Guardian), played by David Harbour of Stranger Things fame, and Melina, played by Rachel Weiss.

Now, this is a Marvel film that also is the first one in a long time to have no super powers really on display. None of the characters really have super powers; they’re all just highly trained individuals, and that comes down to the villain being Taskmaster this time. If you played the Avengers videogame last year (and if you did, I sincerely apologise and hope you haven’t been too badly affected by how awful of a game it is), you might be surprised to find that the Taskmaster is slightly different to his comic counterpart. This has been a big complaint from the comic fanbase of Marvel, although personally—this is probably going to be my own controversial statement—I prefer this version of Taskmaster. Let’s be honest, Taskmaster is not that interesting of a villain in the comics, but this version is much more interesting, though I won’t go into spoiler territory on how this one is different. But that being said, I like the new costume design for Taskmaster and they did keep that they’re an expert that can copy any Avengers abilities almost on sight alone. And it allows for the mood sets of characters like Captain America and Black Panther to come into the mix. If there’s one little niggle I’d say it’s that it feels bit weird having Taskmaster in a Black Widow storyline given that they’re primarily an Antman/Avengers villain, but again, the way they put him in kind of works.

But Taskmaster is kind of pushed to one side for this new villain, Dreykov, the Master of the Red Room, played by Ray Winstone, who keeps on every third word slipping out of his Russian accent and back into his normal accent. He’s a fine enough villain for the film he’s in but Dreykov takes up pretty much all of the second half of the film and just isn’t that interesting, especially considering that the villains were one of the aspects of the Marvel films that were starting to get better with every entry. As per Black Widow herself, one of the things I was surprised to find was that they could get another character arc out of this character; I didn’t think there was much more space for this character to go but they managed to find something to work with, and it does a decent job all things considered. I did like the bond with her and her family and I kind of like the message they go with.

The biggest problem I have with the film was the fact that it isn’t paced very well. Marvel films often suffer from feeling like they’re just going from one set piece to another, and this one definitely felt like that. I was actually surprised to find this film is 2 hours and 13 minutes long including the post-credit scene, because it feels like a short film. There are also a couple of things that they just seem to pull out of nowhere, and stuff where you say, “How did they know that was going to work? If one thing went wrong, your whole plan is out of the window!” It also doesn’t feel like a huge deal, and even the biggest filler Marvel films have sort of felt like a big deal; this feels like a much smaller production and doesn’t seem like a lot of the budget went to this one. It’s also not doing anything new or expansive with the Marvel Cinematic Universe even though it’s tried bringing the espionage edge to the film. But again, it’s not like that hadn’t been explored—that was in Captain America: Winter Soldier, and there have been other productions to explore that side of the Marvel Cinematic Universe. It doesn’t help that this came on after the trailer for the Eternals film which looks like it going to be doing something very different with the Marvel Cinematic Universe; I’m actually looking forward to seeing what the team will be doing to bring that to the big screen.

Now, as for the fight scenes, they’re actually really good, as you’d expect from a Marvel film. But it’s very clear director Cate Shortland does know how to shoot these kinds of scenes. These are meant to be highly trained characters and we’re allowed to see that in effect. It also does not shy away from the fact that this is one of the first female-led Marvel films. Granted it’s not the first, as that was Captain Marvel back in 2019, but it’s definitely the first one to put that aspect front and centre, and it actually as a result leads to the film going to rather darker areas than I was expecting. I was watching the opening credits and thinking to myself, ‘This is a family film, right? This is Marvel?’ I know the Marvel comics can go dark but the films have always kind of strayed away from this. As for the performances, Scarlett Johansson’s still great in this role and I actually thought the newcomers were pretty damn good. Florence Pugh does a really excellent performance and she actually plays very well off Scarlett. David Harbour is also really good in the film, although he’s very clear he was brought in to be the comic relief. That being said, Red Guardian is one of the best parts of this film (I’m glad David Harbour has recovered after being in Hellboy), and Rachel Weiss also gives an excellent performance. The standout performance in this film I can’t give away for spoiler reasons.

Black Widow is a good film all things considered, though if I were to put it on a tier list with all the Marvel films, it’s very much middle tier. It’s not one of the lesser Marvel films in quality but it’s also not one of the higher films in quality either; it’s right slap bang in the middle. There are some good things to say about it: the fight scenes are well-choreographed and shot, the plot is actually pretty good overall, and I like the dynamic between the cast. Its pacing however is where it’s a bit off—this film feels like it goes by a bit too quickly and doesn’t allow for moments to sink in. And by the end, while it does do one good villain, it does another rather lazily. If you’re really into the Marvel films this is one to go back to cinemas for, though considering its place in the timeline you obviously don’t have to worry too much about it spoiling things at this point. The post-credit scene actually does set up something in the future, though I’m not quite sure what. For the first film of phase four, it doesn’t really set up a this-is-the-next-central-conflict-in-the-Marvel Universe like Ironman did or even how the Avengers did by the end of its post-credit scene. And I think we may be waiting a while to find out what the next central conflict in the Marvel Cinematic Universe is.
Calvin – Nerd Consultant
Share This Post: