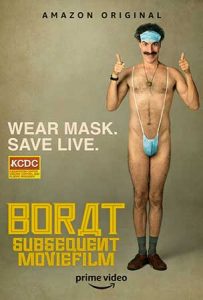 With cinemas shutting down again it’s definitely going to be a case that we’ll be watching all our movies on streaming services, which is why it’s slightly comforting to know that the latest Borat film went directly to Amazon Prime, though I suspect a planned cinema release was on the cards. The problem for Baron Cohen with this character now is that it’s probably his most recognisable character (with the possible exception being Ali-G); there are very few people who don’t know who Borat is.

So how do you make a mockumentary across America when you’re that recognisable? Well, Baron Cohen has certainly managed that this time, but I’ll go into a bit more detail about this as we go. Now, for the purposes of this review, I am going to follow the rule that was set to reviewers with the promise of not giving away the gags in the film. But if you’ve seen the previous Borat film, you know some of what to expect.

There is once again a minor plot to facilitate the pranks on the unsuspecting people, that being this time that Borat, after disgracing Kazakhstan, once again travels to America to rebuild their image by gifting Vice President Mike Pence the gift of Kazakhstan’s top star, who happens to be an orangutan. However, on the way over, his daughter Tutar (played by Maria Bakalova) sneaks into the box and eats the monkey for sustenance and now, in order to avoid disgrace and execution, Borat promises to gift her to Mike Pence. Yeah, you can kind of guess where this is going.

The gags actually are really hard-hitting in more political sense; this is a way more politically-driven movie than the previous one. And the good news is that the gags have evolved to suit the changing climate of America right now. The first film was made during the Bush administration; this film is being made during the Trump administration and definitely reflects a lot of aspects of the rise of the alt-right, and the put-upon submissive nature of men in power that has been exposed by the #MeToo movement is commented upon in the film, particularly of note during a scene at a debutante ball.

The one thing I find interesting is that the defense that many people are going to use when they turn up in the film is that “the words were put in [their] mouths,” but if you ever notice, Borat never openly asks people to say anything; he most of the time will ask questions. This is what’s great about when Baron Cohen’s writing is on point: he exposes the ugly nature within us and how people are willing to say things when they don’t think they’re going to be called out for it. It’s genuinely a hard-hitting film. Baron Cohen really had this intention because he was insistent that the film go out before the Presidential Election which happened this week, and it obviously was a film that was made up until the last minute since the film also had to comment on the handling of the COVID-19 pandemic. Some of the gags have been somewhat spoiled, especially with the knowledge that Rudy Giuliani looks very bad coming out of this film. And trust me, I’m not going to spoil the gag but wow, that guy is even more of a slimebag than I thought he was before. But it’s what Baron Cohen does best: he exposes the rather dark nature of our society that is kind of hidden but people are very comfortable with.

Now, some of the gags don’t entirely work. Baron Cohen at his worst just makes cringe comedy for the sake of cringe comedy, and there are a couple of points in this film where I was thinking there was no real need for this. But it does feel like he’s working off the momentum that he brought into his This is America series which, I must be honest, I think did a slightly better job of exposing the ugly side of American politics that exists right now than Borat has done. And I don’t think this film will change anyone’s political motivations.

It’s also one of those films that’s surprisingly very heartfelt. The plotline is minimal in this one but it has a genuinely heartfelt feel to it, mainly because the new character of Borat’s teenage daughter Tutar is excellent. Baron Cohen’s giving his all in this one but Mario Bakalova does an excellent job in her role – she can really play off Sacha’s style, she’s very good at improv, and she gives a genuinely great performance. She’s one of the best parts of this new film.

With regards to the ending, some people are going to be a bit pissed off with it I think, but it’s the kind of thing where I think, ‘If people are pissed off with this ending, I’m kind of glad they’re pissed off with it.’ The one thing I’ll say is to not go into this film expecting it to be completely like the first Borat movie. Obviously, Borat couldn’t be entirely on screen at all times because again the recognition of that character means it would have been damn near impossible to make the film, so there’s a lot of different disguises for Borat to wear in this one. But as a result, we get a ton of excellent moments with the new disguises, one of my favourites being a country singing persona he created. Trust me, you’re going to love the gag.

Borat Subsequent Moviefilm is probably one of the funniest films I’ve seen all year and is Baron Cohen back in his top form. I was really worried he was creatively bankrupt after Grimsby, but between This Is America and this new Borat movie, he’s proven me wrong and he still has some excellent work in him. If for no other reason than that, you really should check it out. It is an Amazon Prime exclusive right now but I would recommend if you have Amazon Prime to check this one out – it’s an excellent movie, and does not feel like a cashgrab on a popular character. This one does feel like it’s been made with a purpose.
Calvin – Nerd Consultant
Share This Post: