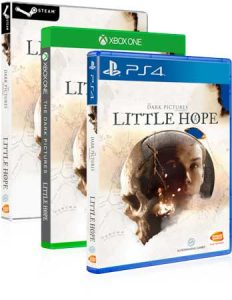 The second in Supermassive Games series (third if you count Until Dawn) has been put out following last year’s Man of Medan which largely received negative reviews for its lacklustre story, short game length and poor camera and lighting (seriously I know it’s a horror game but I still need to be able to see something). That game ended with a trailer for this game Little Hope which tells the story of a group of college students and their professor being stranded on the road to a town called Little Hope after a bus accident. The group venture into town with some strange supernatural stuff happening along the way and what seems like a dark force stalking them and vision of doubles of themselves during pilgrim witch trials. Once again this is essentially a horror movie you control though like Man of Medan it is also a shorter experience going for around 4- 5 hours for each playthrough. Though like I said with my review of Tell Me Why with these kinds of games the length isn’t the major factor it’s going back to see how you can alter the story. once again the game also offers pass the controller multiplayer which means 2-5 people can each pick characters and will then pass the controller to one another to play which is what I did on Halloween with my housemate which you can see on my YouTube channel since we recorded it in 2 videos ( the reason why 2 videos for a single playthrough will be explained later). the majority of the time will have you exploring environments to provide more context on the town, the mystery of what is going on and the character progression as well as quick time events which you’ll need to do almost perfectly to get that character out alive.

Little Hope fixes a lot of the problems Man of Medan made but also has its own issues. while it’s a better and more compelling story that invites replay, much better performances and has way better quick time events it still could be a longer experience and it has technical issues that really should’ve been resolved before launch. That being said, I had way more fun with this than I did playing Man of Medan which I think counts for a lot and I’m looking forward to playing more with friends when I can and I hope there will be further improvements in the sequel next year that’ll be going to the next generation consoles.

I would recommend getting it since it’s a good experience though you’ll get the most fun out of it after lockdown measures are lifted and you can have friends over so you might be worth waiting on a sale.
Calvin – Nerd Consultant
Share This Post: