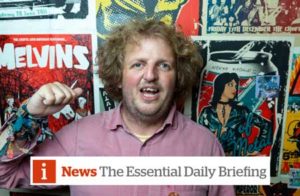 If a band plays in Bristol and the man they call Big Jeff isn’t down the front, punching the air and shaking his thatch of blond curls, did the band really play at all?

Tim Burgess, lead singer of The Charlatans, thinks not.

“A gig in Bristol without Big Jeff doesn’t count!” Burgess tweeted earlier this year after his band performed in the city and (more importantly) in the presence of Big Jeff.

His real name is Jeffrey Johns, a gentle giant who stands six foot four in his size 13 shoes. For the past decade this painfully shy music obsessive has been going to as many as ten gigs a week – and become a minor celebrity in the process.

Big Jeff is celebrated as an arbiter of taste, a walking encyclopedia of music and the unofficial ambassador of Bristol’s live scene.

His conversation is peppered with the names of terrifyingly obscure bands and he delights in everything from Congolese choral music to psychedelic post punk. If he’s not at a show, people begin to wonder if there’s a better gig taking place on the other side of town.