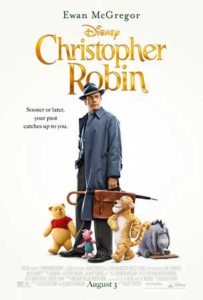 Not to be confused with the film Goodbye Christopher Robin which I reviewed last year. Disney already had their own film that works, with them still retaining the right of this specific image of Winnie the Pooh. The actual characters in the books themselves I believe are currently public domain which is why Disney had absolutely no involvement with Goodbye Christopher Robin. Considering the new lights that film put the books in, it feels rather badly timed for Disney to be releasing a film like this. Goodbye Christopher Robin really did expose some of the darker sides of the books creation and what it did to the family of the author. On the one hand it brought them together, then on the other it also drove them into public life and drove a wedge between them.

Mill’s stories of Christopher Robin and his collection of animal friends in the 100-acre wood were based on his son’s teddy bear collection. It certainly captured a lot of people’s imagination. I’ve got to put in, I’m not exactly nostalgic for Winnie the Pooh when I reviewed Goodbye Christopher Robin and that’s still not changed, I still hold no real nostalgia for the books and the stories, though I do remember watching a few of them occasionally. Christopher Robin though did seem genuinely interesting. A grown-up Christopher Robin is certainly a decent idea, the problem is, it’s not as if this idea hasn’t been done before.

Christopher Robin is the story of him as a grown up, years after leaving his childhood home in Sussex, to start work in London. He is played by Ewan McGregor. He meets his wife named Evelyn (played by Hayley Atwell), and they have a daughter named Madeline (played by Bronte Carmichael). His boss- Giles Winslow (played by Mark Gatiss) sets him a tough assignment over the weekend, and the pressure is on, which means he can’t spend the time with his family at his old country home. However, when the pressure really does start to get to him, his old family friend, Winnie the Pooh, (played by Jim Cummings), comes to him in the hope Christopher Robin will help him find his friends as they have gone missing. Probably just as a way to get out of doing the work, he does go to the 100-acre wood, though it is becoming apparent that there is more he needs to know, and he needs to reconnect with what made him who he was.

Christopher Robin is pretty much the by the numbers, overpaid, parent cliché. There is nothing new you are getting with this film, though if you are a fan of Winnie the Pooh, relax, this is very much in the spirit of the books. Fans of the Disney animated films and series will be happy to hear Jim Cummings reprise his role from those films both as Winnie the Pooh and Tigger, frankly doing this film without him in those roles would have felt off. I am glad Disney didn’t go with the temptation to cast a celebrity voice cast to play those characters as it would have felt out of place. That’s not to say a celebrity voice cast isn’t used for the characters, there are celebrity voices in some of the roles, such as Peter Capaldi as Rabbit, Toby Jones as Owl and Sophie Okonedo as Kanga. If you are familiar with their voices you will be very hard-pressed to figure out that its them. Seriously, I really could not tell. Peter Capaldi was especially good at hiding his voice and considering how recognisable Toby Jones voice is, I am surprised that he was the Owl. Nick Mohammed as Piglet was another stand out performance and especially Brad Garrett as Eeyore who is one of the funniest characters in the film, responsible for most of my laughs.

Despite the fact this film is very unoriginal and pretty by the numbers, the script itself is actually pretty good. The script was written by Greg Brooker and Mark Steven Johnson, which is a very weird combination, considering one was the writer of Stuart Little and the other was the writer and director of the dare devil and Ghost Rider movies. If you think that’s weird you should see who actually wrote the screenplay, Alex Ross Perry, who’s probably not written much you are aware of, except maybe Golden Exits from last year and The Colour of the Wheel from 2011. You also have Tom McCarthy, of all people, the writer and director of the Oscar winning movie Spotlight, anyone who has seen that movie knows how out of place this is. Alison Schroeder, who wrote Pineapple Express and Hidden Figures, this is not sort of team you would expect to write a screenplay for a Winnie the Pooh story, but their screenplay is very much in the spirit of the books. They really understand what the dialogue is meant to sound like. Pooh’s lines for example are almost to the note of his character. A memorable line which has been used in the trailers is a good example of this, when he says, “People say nothing is impossible, but I do nothing everyday”. Another strong factor of this film is that it is directed by Marc Forster, a BAFTA nominated director for both his films Finding Neverland and The Kite Runner. He definitely brings a lot from what he did in Finding Neverland to this movie.

If there is one thing I will say about the film, if I’m going to positive is the special effects, the effects they use to bring the characters to life are pretty damn good. The characters in the 100-acre wood could have easily looked like CGI monstrosity’s if they tried to make them to photo realistic. However, what they smartly do is go back to the routes of the books creation and make them look like stuffed teddy bears that have come to life. The effects are damn brilliant. This is a film that should definitely be nominated for several special effects Oscars. They work well, especially with Jim Cummings very recognisable voice, it doesn’t seem out of place. What’s more the character designs are so well done and they’ve done a great job on the costumes.

There are other factors that go back to the book’s creation, such as Christopher Robin serving in World War 2, just as the way that the son of the Author also served in the second World War, in the early portions of the film. They fortunately don’t go down a PTSD route in this film, imagine trying to explain that to your kids. It didn’t make me think, Nazis are now in the Winnie the Pooh cannon, that’s a very disturbing thought.

The 100-acre wood itself also looks like it was also filmed on the exact same set as Goodbye Christopher Robin. Some of the scenes look note for note, and I know both the films were going on the locations in the books but it is eerily similar.

Despite the fact Ewan McGregor is a bit off in a few of his parts, he is clearly having a good time in this role. His work doesn’t really create much interest in the role and the climax and solution feels a bit weird seeing as I’m pretty sure companies where doing the solution that he has to his problem years ago, in fact I’m pretty sure Ford was pioneering the idea. So historical accuracy is completely out the window.

If anything, Mark Gatiss role in the film is probably one of the weirdest parts. He’s not in the film all that long but he’s so recognisable as Mycroft Holmes from the BBC Sherlock, that I think it’s going to be very difficult to separate him out.

This film is clearly aiming for the Paddington market, trying to capitalise on the success of those films which have made a lot of money at the box office. I’m not sure if it’s going to entirely work. Paddington had its own issues, but I think the films worked better than Christopher Robin because they didn’t take themselves too seriously. They knew they were practically a live action cartoon. Christopher Robin is trying to act as though this sort of thing hasn’t been done before, when it clearly has. Granted, it is a bit unfair to compare the two films, but financially I think this will probably do better in America where Winnie the Pooh is more popular than Paddington. But at the same time, I think this film is not destined to get as much of a following as those films are and I don’t expect a sequel anytime soon, not that there is much room for a sequel following this.

Christopher Robin is a very ambitious project and one that is in the spirit of its original books for brief moments, but it is a film that won’t excite people much throughout the running. Props to the well written script and the excellent special effects work, the characters performances really range. I think it tries too hard to please both kids and adults, but at certain points are at expense of the other. It is certainly something to take your kids too, but, if you saw Goodbye Christopher Robin last year, it might impact on your enjoyment of this film although I think they would work well together as a double feature. If you like Winnie the Pooh you really owe yourself to go see it, if not this one won’t change your mind.

Well that’s it from me for this week, next week I am going to do a review of a horror film based on an internet meme, Slender Man.

With all that being said I hope you’ve enjoyed reading this review as much as I’ve enjoyed writing it.
Calvin – Nerd Consultant
Share This Post: