Creativity, Partnership and Celebrating Interests in Service: The Anime Amigos

“There’s a reason that each autistic person has embraced a particular interest.
Find that reason and you will find them…”
Ron Suskind

The quote above highlights the cruciality of connecting with, celebrating and capitalising on the unique affinities of autistic individuals. A commitment to this way of thinking and working with autistic people underpins the assessment, diagnostic, and post-diagnostic work at Chester-based neurodevelopmental service, Axia-ASD Ltd. Partnership and shared expertise with those who use the service are amongst Axia’s underlying values. The service adopts the view that neuro-diverse individuals are amongst the most creative, talented, interesting and inspiring members of our society – developing and nurturing their affinities is vital.

This article describes an example of creativity, partnership and celebrating interests at Axia-ASD Ltd. That is, the work of Anime Amigos.

Who are the Anime Amigos?

“Art can permeate the very deepest part of us, where no words exist”
Eileen Miller 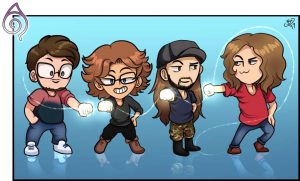 In recent years, members of the staff team at Axia realised that they shared a deep passion for one art form with autistic individuals accessing the service. Anime is a medium which combines comic-style images, intense colour and movement with captivating fantasy storylines, for TV and film. Through conversations centred on a shared interest in Anime at Axia’s post-diagnostic support group, Anime Amigos were born.

Anime Amigos are firstly a group of friends, but also a group of neurodiverse individuals and now a group of colleagues. Autism, Dyslexia, Dyspraxia and Irlen’s Syndrome are amongst their neuro differences. Cal, Ren, Reece and Elliot come together to share their Anime interest and expertise with one another. Through monthly online vlogs, and other activities, they aim to connect with other individuals who share their affinity for Anime. Together they have helped innovate the service at Axia, and have supported the connections between autistic individuals, families and the service they come to access. 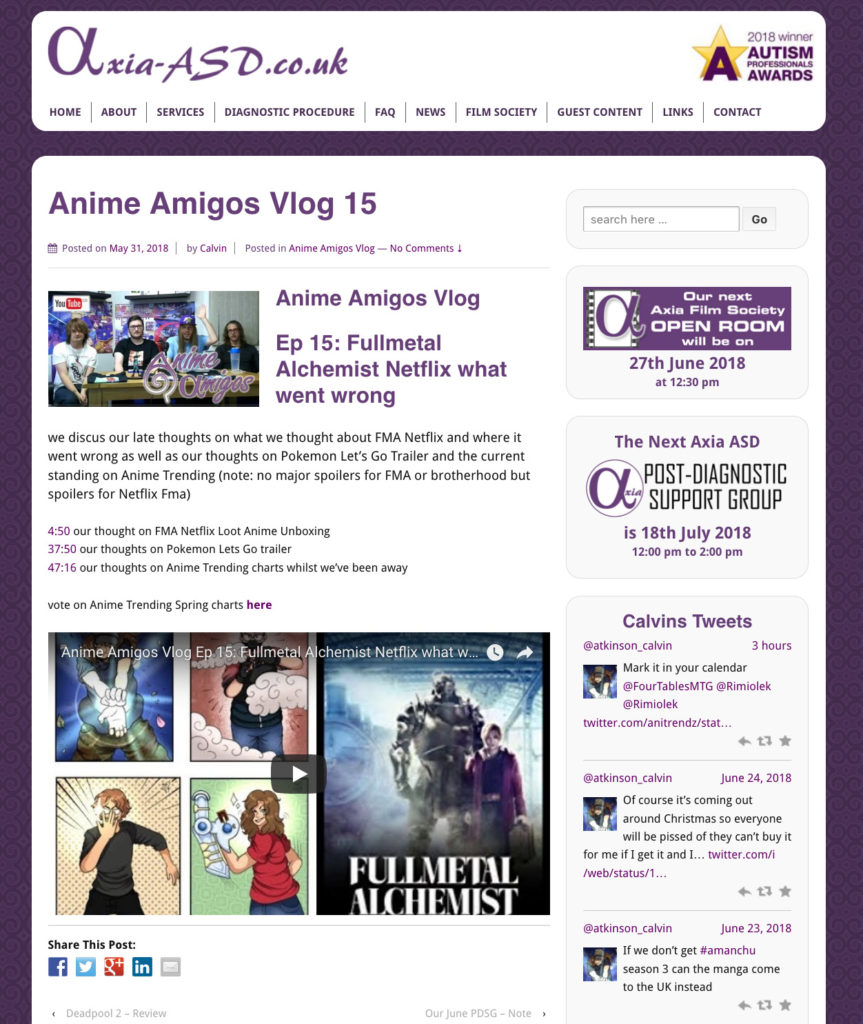 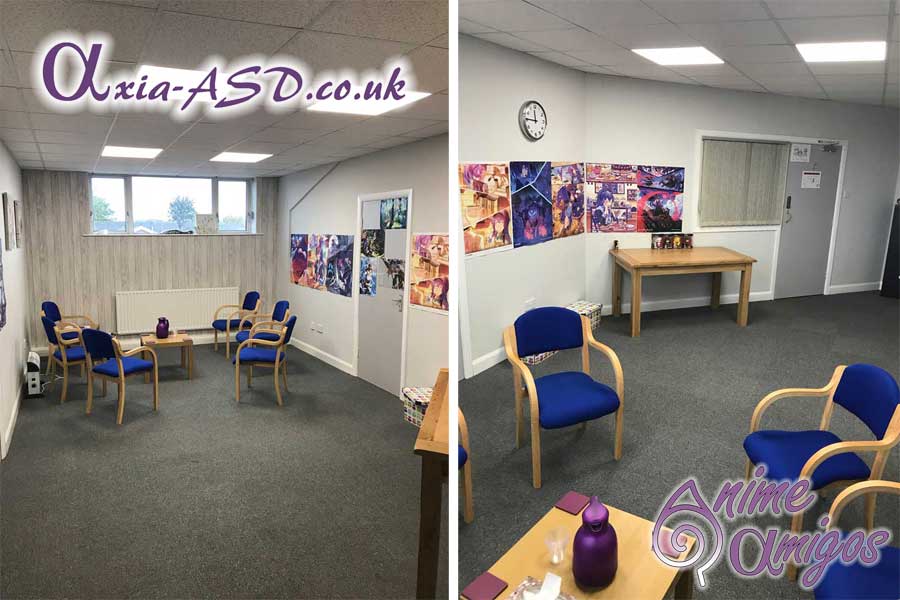 The Anime Amigos were interviewed about their experiences of Anime and codeveloping and running their group. Here is some of what they said:

Reece: “You’ll be surprised, a lot of Autistic people are interested in anime … because Autistic people have good taste. A recent survey – I think it was at London ComiCon – found that the Autistic people who were there made up about twenty percent of the total people. To me [Anime Amigos] represents the ability for me to come out of my comfort zone. Because normally I’m not very verbal but I feel like, amongst friends, we can discuss our opinions and put them forward. It’s made me realise I’m not alone in myself, that there are others like me and people to talk to. [Anime has] been a part of my life for as long as I can remember. So there’s always been that good creative outlet. So, say you have a tough day at school, or something’s getting you down, you know that you can go and watch a show, and that will pick you back up and put you in the right frame of mind.”

Elliot: Admittedly, anime can be something that, at times, can be a little tough to get into … but I think a lot of Autistic people can get into anime very easily, really. I think you just sort of get a passion about it, like you start to identify with the characters and the story. It’s like a way to envision another world, or other concepts. It’s a way to sort of release emotions. Like, I remember one time I was dating a girl, and I was meant to go to her house that day, but I wasn’t able to because she wasn’t feeling well. I was really upset, so I just binge watched ‘Mirai Nikki’, and in a couple of hours, I was completely happy. I think it’s good, because we all have a different knowledge of anime. We also have different opinions and different goals with anime, I guess. It’s just like talking about something I’m interested in with friends, and well, I don’t know; I rarely get out because of anxiety issues, so … just something to look forward to each month. I think, really, as long as it stays fun, we’re just gonna keep doing it. Who knows, we might make a bigger impact on people than we think. You know, it might introduce a bunch more people and get them interested.”

Ren: “It’s a good outlet to just broadcast your opinion, but also have fun. We all have different spheres of interest within anime, and it’s interesting that we can have that. Yeah, just like learning new things … having recommendations from other people, you know, and hanging out with people, it’s nice to talk and to hang out with people who are a lot more knowledgeable than me in certain areas, it’s quite interesting to hear opinions. Hearing from [clinicians at Axia], people coming into the Anime Room, it does have an effect on people coming in to be diagnosed, or for treatment with us, because they’ve come in and they’ve seen the anime in the room, and they’ve heard about the Anime Amigos, and, I think, so long as people continue to hear about it from the group and stuff, we may get further involvement, and then grow. People who have these interests need spaces to go about them. Providing the space, I think, is probably quite an important thing. And just being able to come in and play a game … just allowing people to come in and pursue their interests in a way that includes other people also. I think the other clinicians have learned a lot from Cal, certainly, explaining video games and all sorts of other mediums that people are interested in. I think it’s a way of including people as well… people have benefitted, and also Axia benefits as a whole.”

Cal. “I take it seriously, but at the end of the day, I don’t view it as something that will be a massive thing and take the internet by storm; I just view it as me having fun with my mates. This is a dynamic that really works. I think all of us bring our own thing to it. It’s a good laugh and a joke and … it’s a place where all of our opinions feel like they’re being listened to, which is, for a lot of us – you can go through the world a lot of the time, feeling very much like your opinions aren’t being heard. If we even make an impact on each other’s lives, I’d say that it was worth it. [The book I’m writing: The Nerd Consultant’s Guide to Anime], it’s kind of like an anime guide for parents and professionals. I really hope it would just be something for people to just really look at, and to understand it more.”

Linda Buchan, Clinician and Service Director at Axia, was interviewed about her experience of the Anime Amigos. Here is some of what she said:

Linda. “It might look like they’re just having fun but it actually represents something much bigger. Clinically it has made a difference to a number of people. To me it shows that we are trying to do something a bit different, we are not just sticking to clinical and diagnostic work, we see the importance of connecting with people. People have said when they’ve gone on our website, the fact that we’ve got stuff like the Anime Amigos shows that we embrace difference. It’s not just words, there’s evidence there of difference being embraced and people being seen as equals. We are always trying to work in partnership and I would see Anime Amigos as an example of true partnership working. We’ve got a lot of Anime A4 information sheets for clinicians … the knowledge shared from Anime Amigos has helped ways of connecting that show my human side to the client but also that I’m valuing their interests … I’m saying “there are things that you value and are important to you and I’d like to know about those”. We have the Open Room now which is a bit of an extension on Anime Amigos. At the moment it’s only a small number but to me if only one person connects with that then it’s one person who’s being valued on their interests … There are a few representations of people with Autism within Anime. There’s one called Deathnote and I quite often use that in a diagnostic session, like “have you seen Deathnote?” And they’ll say “do you think L is autistic” and I’ll say “yeah I do”, so you can quite creatively have a discussion about autism through Anime.”

“[Special interests] are energising, restorative and serve an important function in allowing my brain to do what it does best.”
Leia Prime

Anyone living or working alongside people with autism must be committed to connecting with and nurturing their affinities. Anime Amigos have championed this within Axia-ASD Ltd and the group has been fully embedded into the service. The accounts from the Anime Amigos and Linda Buchan above, highlight the value of the group for the Amigos themselves, clinicians within the service, and individuals who access it. This exemplar of creativity, partnership and celebrating interests within a specialist autism service has shown clear benefits for social connection, providing meaningful activity, feeling valued and heard, and upskilling clinicians on this specialist interest, which fosters engagement with service users. There are some interesting points raised about why Anime can be attractive and beneficial for some people with autism, and how a coproduced group based on a shared passion can have multiple benefits for a range of stakeholders in services.

Anyone interested in learning more about Anime for their own benefit or the benefit of connecting with their loved ones can pre-order a copy of Calvin’s book, ‘The Nerd Consultant’s Guide to Anime’ which is due for release this year. See our contact details below to pre-order. Alternatively, subscribe to our website, Twitter, or Facebook pages for updates. Here you will also find the monthly Vlogs and other activities from the Anime Amigos

One comment on “Creativity, Partnership and Celebrating Interests in Service: The Anime Amigos”