Reign of the Supermen – Review

Apologies for the late arrival. We were caught up getting ready for NAS conference including the Anime Amigos article
Most of us will be away at the conference from Wednesday to Friday.
We will of course let you know of any new research etc that may be useful for us all. 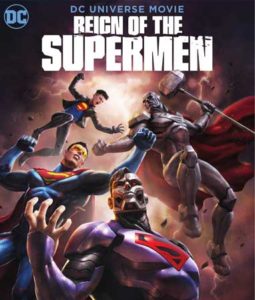 So here we are, a few months after the death of Superman comes out, we finally get the part 2, Reign of the Supermen. As I explained in the last review I did of this, that I thought that they thought it was a good idea to tell this comic storyline into two films rather than one and considering how highly I rated Death of Superman, you will understand that I was very eager to see this film. Reign of the Supermen has virtually the entire production staff and cast from the first film, there is virtually no difference to be expected, so if you want my thoughts on that go back and check it out.

Let’s get straight into this: I probably shouldn’t have to say this but of course there are spoilers in this part of the review. So, Reign of the Supermen takes place 6 months after the events of Death of Superman. People are still coming to terms with the fact that Superman is gone having fallen during the fight with Doomsday, but now in that time period we have had four new people attempting to take up the role of Superman. There is one who is known as “The Eradicator” who is voiced by Charles Halford, there is a new Superboy, who is being sponsored by Lex Corp and who is played by Cameron Monaghan, John Henry Irons, aka Steel, played by Cress Williams and a new cyborg Superman voiced by Jerry O’Connell. In the heart of it, Lois Lane, once again played by Rebecca Ronijn is attempting to get to the bottom of it or figure out if any of these could be Superman brought back.

Ok, Reign of Supermen is a decent film, all things considered with regard to its plot, although it’s not quite on the same level as Death of Superman. Given the fact that the film seems to have to juggle all four of these characters, given decent arcs and payoffs, which obviously means that at least one of them is going to be underdeveloped. On the plus side, they did pick the ones that are the most interesting, Superboy and cyborg Superman are the ones with the most amount of focus. Their arcs are generally ok, although Superboy feels a bit rushed at times, if anything Lois Lane is kind of the focus of the film and she is genuinely one of the best parts of it. The film seems rather fast and loose with its story, we don’t even wait all that long at time for all of the four new Supermen to be in the same proximity, within the first few minutes of the film there is a fight scene at Lex Corp between them. It is loyal to the comics, but that’s where it kind of falls flat. The comic storylines had this idea that DC were trying to come up with an idea of what could be a decent replacement for Superman and were simply testing the water to see which one of these would take off and while it is a genuinely interesting storyline, it doesn’t really hit its crescendo until the second half.

The one storyline the film does tend to stick with is the idea of a world living without Superman, how does this world cope after such a devastating loss. The second half leads to some interesting ideas down the line. Of course, there is an interesting idea about people trying to step up and be their own heroes and the various forms that that takes. If there is one thing holding the Reign of Supermen back is that there are a lot of good ideas but the film struggles to fit them into one film, once again the troubles of adapting a very long comic storyline. However, some of the scenes are genuinely, once again, great. For one, Bibbo Bibbowski is once again a highlight of the film and the film makers once again don’t over saturate him, but just as a reason for him to be in the film once again, despite the fact that they have bit of a rubbish way of writing them out of the plot and Rainn Wilson is once again surprisingly effective as Lex Luther, in fact the whole cast is pretty damn good.

The acting is genuinely half decent across the board, Jerry O’Connell is doing very well as a cyborg Superman, there is also excellent support by Rebecca Romijn as Lois Lane. Cameron Monaghan, who you will recall played Jerome in Gotham, does a really good job as Superboy, although you would never guess it was him. Charles Halford does a pretty good job as The Eradicator, even if he feels kind of underdone in the film. Cress Williams, who has been playing Black Lightning, is pretty good at being Steel, even if once again he does feel a bit underused. There are a lot of the cast reprising their roles to still good effect; Jason O’Mara is still good as Batman, Rosario Dawson is still half decent as Wonder Woman, even though these film makers have no idea how to write Wonder Woman. Nathan Fillion is depressingly underused as Green Lantern.

The animation, well there’s not much more to say about the animation, it’s pretty much the exact same thing I’ve been saying about all these DC animation films, it’s half decent but I’m not a great fan of Jim Lee’s art style, which they are trying to replicate with all these films that are set in this DC shared universe.

If I’m talking about the action scenes, however they are really good in this film. There are some genuinely decent action scenes all things considered, while none of them have the brutality that the Superman Doomsday fight had in the last film, the effort is certainly showing in the end.

I apologise that this film review is quite short but I don’t want to give too much away about this film given it’s short length, but let’s say that Reign of Supermen was no the best way to cap, it was not quite on the level of its first part but it was a decent conclusion to the Death of Superman story arc. The conclusion is pretty good, the side cast is good, the animation is good, it just doesn’t feel like a story that flows as well as the first part and there is less of a character lead to the first film. Still if you enjoyed the first part and you want to know how this story arc ends, then this is going to be excellent for you even though it is slightly predictable although I will encourage people to give it a watch.

The DC animated universe will be back later this year with the release of Justice League -v- The Fatal Five and that one looks like it’s going to be really good, but we’ll save that until that comes out.

It’s time to look at what I’m doing next, and its one that could be really damn good, it is a film written and directed by Steven Merchant, a biopic of a WWE Wrestler, next week I review “Fighting with my Family”.

With all that being said, I hope you enjoyed reading this review as much as I enjoyed writing it.
Calvin – Nerd Consultant
Share This Post: