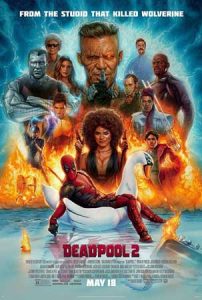 Deadpool 2 is now one of the biggest follow ups to a superhero movie considering how high grossing the first one was, and it left a lot for people to want more. Deadpool is worldwide the highest grossing R rated movie and if you check my previous review I thought the film was fantastic and exactly what I wanted out of the film for the characters. Considering prior to that film I wasn’t a big Deadpool fan, that’s saying a lot. Deadpool 2 doesn’t have the surprise factor anymore, everyone’s aware of it and they know what they want from a sequel.

I had no real concerns for Deadpool 2 considering it didn’t feel like it could go wrong, however, I became slightly concerned when director Tim Miller ducked out of the sequel which is unfortunate given that I thought he did a very good job with the first film and unfortunately, he’s not got onto the project that I was hoping he was doing which was rumoured that he would be directing the upcoming sonic the hedgehog movie. In his place is director David Leitch, a former stunt choreographer on a very mixed range of films and hasn’t got much directorial work to his name. He did direct last year’s atomic blonde which I didn’t see unfortunately so I have no opinion on, but he did also direct a Deadpool short and was an uncredited director on John Wick, which is one of my favourite action films. He also doubled up by directing the Celine Dion theme song for this film which is used in a Bond style opening.

Let’s cut to the chase however, did Deadpool 2 follow on from its predecessor very well? Normally I would do a plot synopsis but Deadpool 2 has a massive moment in its first 10 minutes which although shapes the film, is a massive spoiler to anyone who has not seen it so in this instance I will not be doing a plot synopsis, but I will be going over certain plot points in the new characters introduced but this review might be a bit short and a bit vague.

Cable played by Josh Brolin, comes back to our time from the future wanting to kill a young mutant named Russell played by Julian Dennison and from there we get Deadpool trying to rescue him because he thinks there’s a bond there whilst also trying to sort out the terrible chaos that’s going on around it. One thing you will notice about this film is there is a lot more emphasis that Deadpool is part of the X Men stable of characters. The X men were certainly a factor in first film but they were more on the side lines, this film definitely wants to push it more front and centre, we don’t get a lot more x men characters but there is certainly a lot more emphasis on them, in fact quite a few of them form the first film have been reduced, Negasonic teenage warhead isn’t in the film all that much but colossus’ role has been slightly expanded.

Now cable was always going to be a factor in this sequel, it was even teased at in the post credits scene of the original Deadpool, now I was very surprised when Josh Brolin was announced to play the role since he was very tied to the marvel cinematic Universe playing Thannos of all people which means I’ve now seen two superhero films in just a few weeks, both with Josh Brolin in and once again he knocks it out the park. Josh Brolins version of Cable really works in this film, granted he’s not playing a very original character they make tonnes of jokes about it in the film and Josh Brolin isn’t exactly like the character in the comics, where Cable is much taller and bulkier, however Josh Brolin is actually shorter than Ryan Reynolds so it kind of looks weird when the two stand next to each other. Granted however they do a few good camera tricks to disguise that and of course they even poke fun of it at one point.

Everything you liked about the first film was back, most of the characters are all back, most of the jokes are back, there’s tons of fourfold breaking including some absolutely hilarious ones in the post credits scenes, seriously stick around for them and Ryan Reynolds is once again on top form as Deadpool in fact I think in some ways he’s possibly even better this time round. The plot line itself is a much more mature one. Deadpool himself being put in a very different situation to the first film. The trailers haven’t given away a lot of the plot line of this film so as a result a lot of people may go into this film not getting the film they were expecting but damn it I think the films even better for it because that. Deadpool 2 seriously tries to up the ante like a good sequel should and it kind of does succeed on several levels. The film is very well written, some excellent character moments and some hilarious jokes which feel like they’re ripped straight out the comic, some of them however might go over people’s heads. The first film certainly had a lot of jokes that were nods to the comics but this one feels like it’s even more in that role.

They also looked to clearly what was popular in the last film and did it on repeat sometimes to the benefits, like more emphasis on the x men and then you’ve also got the expansion of other characters like weasel who’s played once again by T.J. Miller, but there’s also an attempt to expand the character Dopinder who is once again played by Karan Soni, but his character is a bit more of a one note joke this time around, he wants to be an assassin but he can’t quite do it. He did get a few pay off jokes but I felt there was better ways for his character to be integrated into the film.

Deadpool fans will be happy not just Cable is in the film but domino who’s a real fan favourite from the comic series is in the film. She doesn’t have a lot of the pale make up or blue hair, but Zazie Beetz does a really good job of playing the role and I do like this new design for Domino which is still actually pretty close to her comic counterpart.

There’s also the integration of the idea of bringing X force into the mix a spinoff comic from the x men line of books and it’s certainly better than the first time they tried to make something with X Force. Trust me there’s a shark jumping episode on that attempt on YouTube look it up it’s hilarious how badly Twentieth Century Fox botched their first time to bring X Men to live action. The thing about x force though is it’s not exactly made of popular characters and the ones they chose this time around aren’t exactly great either, but it does lead to a few funny cameos such as such as Terry crews, a hilarious cameo from catastrophe star Rob Delaney as well as Brad Pitt playing the character Vanisher who is completely invisible for the entire time he’s on screen for the most part it’s hilarious. You did not even need to hire Brad Pitt for this role but for some reason he’s playing a character that’s invisible. Luckily, you’ll also like to know that most of the jokes are hits and there’s very few misses. The audience I watched this film with were not particularly enthusiastic compared to when I saw the first film in cinemas with an audience, Although I wasn’t in a particularly crowded cinema, I wasn’t in an empty one either. I’m starting to worry about the state of comedy with what people are finding funny now and what they’re not finding funny. A final thing to note is the fact Deadpool 2 has some amazing action scenes and special effects. These action scenes are choreographed expertly, some of them are even better that than some of the action scenes from Infinity War. If there was an Oscar for stunt choreography and action scenes, this should get a nomination and possibly even win.

Deadpool 2 is amazing! It’s one well done film with excellent performances from Ryan Reynolds, Josh Brolin and an especially good performance from Julian Dennison who you might recognize from come for the world of people who’s really good making his way up in the world with this role and is a brilliant future star in the making. It had a few niggles here and there but overall, I think it’s one excellent film and can stand alongside the first one pretty well. If you’ve got a chance to see it in cinemas, please do, it’s one excellent piece of work, once again is proof that the first film was not just a piece of luck. As I mentioned stick around until the middle of the credits because there is a bunch of credit scenes after that point, but don’t stick around to the very end of the credits, it doesn’t go any further than that.

Well next week fortunately I don’t have to review show dogs which looks like a terrible film, but instead I’ll be giving my thoughts on the latest in the Star Wars Expanded Universe that’s coming up, its solo a Star Wars story.

With all that being said Thanks for reading this review, I hope you enjoyed reading as much as I enjoyed writing it, and if there’s one reason to stick around to the end credits, it’s for another rendition of the brilliant song used during one of the last fights of the film and another brilliant rap song from team head kick who did the rap song for the first film.