Calvin Posted in Cake of the Month — No Comments ↓ 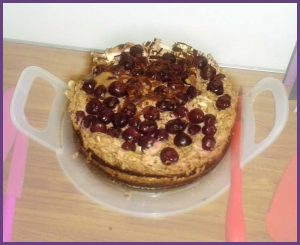 Yes, for Christmas I am going to be putting another one from the Geeky Chef cook book since I think it will be an excellent Christmas present for the nerd in your life.

I have already talked a bit about the book in my Star Trek Anniversary cake and have left a link to find the book there, but you can also borrow the book at the monthly support group because we have a few on standby.

This recipe comes from the video game Portal which, if you haven’t played the game, is basically a puzzle game designed to make you use teleportation vortex’s in order to get to another location. Pretty much a rat in a mazy type game with the computer glados constantly saying that a cake would be a reward, although, you constantly see signs across the wall saying the cake is a lie, however, if you stayed after the end credits you would actually see that glados had indeed made a cake for your, almost makes up for him being a homicidal maniac.

The recipe calls for you to use the cream as a filling, however, I used it as a topping, for the main reason being it would have been difficult to transport to the group and would have been overly messy, so I would recommend not doing that and follow the recipe if you are doing this at home.

Remember, the cake of the month is not a lie, extra points if you would have got that reference without me explaining it earlier.

Posted in Cake of the Month