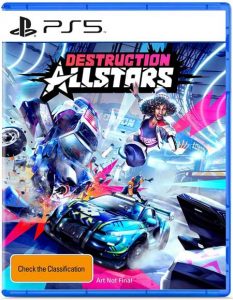 The PlayStation 5 launch has not been a total success with the issue of shortened supply due to scalpers and while it has launched with a few great games as well as some truly great enhancements to some PlayStation 4 games it hasn’t changed the fact that while Sony has stated several games like Horizon Forbidden West and the New God of War game do have 2021 as their scheduled release year no dates have been assigned, Returnal which was the only dated exclusive has been pushed back to April 30th and we still feel like we’re waiting for that next big exclusive game that’s going to make the PS5 investment worth it though the news that Ratchet and Clank Rifts Apart has a June release date eases some of that worry. During it’s first unveiling of the PS5 we saw the first trailer for an online multiplayer game called Destruction All Stars that would be a PS5 exclusive and be at launch, though later got a delay to February 1st 2021. To make up for it Sony made it a free game for it’s first month to PlayStation Plus account holders which is how I got it. The game is similar to classic destruction derby games with several hero like characters to pick from a kin to games like Overwatch and League of Legends. The big difference is you won’t be in cars at all times and you will have the ability to leave your car try a new one or jack in to someone else’s. the game comes with 4 multiplayer modes which range to 2 battle royal modes one of which is score based and the other being survival as well as a 8 vs 8 team game. there’s also an offline single player campaigns but some of them require extra purchases

Whenever I review a game with a largely online multiplayer focus I always say to myself will this join the games I will regularly play for the online multiplayer and this game will certainly not be joining them. It’s functionally all right but the games are far too quick, the gameplay is dull and boring with no real sense of experimentation to find a style that works for you, the online maps have virtually no difference between them and the multiplayer is not well handled in terms of playing with friends. It really is not worth it right now maybe it’ll get better as time goes on but it’s on weak foundations to do so right now.

Get it digitally right now while it’s free if you are morbidly curious the physical edition is not worth it for the price.