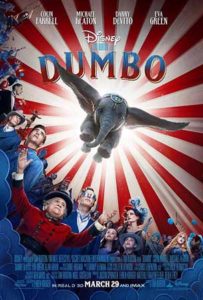 Dumbo is the first of 3 Disney Live Action remakes that are coming out this year, the other two being Aladdin, which is directed by Guy Ritchie and The Lion King, directed by Jon Favreau. Dumbo is directed by Tim Burton, last time he remade a Disney classic, it turned our appallingly with his version of Alice in Wonderland, which is a strong candidate for his worst film. Although that being said, I went into Dumbo with low expectations, I actually thought Burton might be able to make something out of this and he has done pretty well in the past, plus he had Ehren Kruger working on the screenplay, who wrote the screenplay for The Ring and Scream 3, as a recent Ghost in the Shell reboot, but then you remember that he also wrote the screenplays for most of the Transformers films, so he’s a shaky writer at best!

Now I will make it very clear, I have no real nostalgia for the original Dumbo, it’s not one of those Disney films I go back to every so often, or one that was a big part of my childhood, so basically, this film is definitely going with no nostalgic immunity from me. So that’s where I stood when it came to preparing for this film coming out. It’s not like Aladdin or The Lion King, which I am going to be having a lot more of an investment in when they come out, but I actually felt that would be a strength for me since it would mean that I thought it would mean that I would judge the film a bit more objectively.

If you are familiar with the plot of the original Dumbo, there’s not much change here, it’s once again about the new elephant with very big ears that can fly when he holds a feather, the only difference is that this time he is trained by a pair of kids, called Milly and Joe, played by Nico Parker and Finley Hobbins, who are the children of one of the rodeo riders returned from the war, Holt Farrier, played by Colin Farrell, who lost an arm during the war and now can’t do his act. The big difference plot wise this time is that most of the plot of the first film is skimmed over in the first 15 minutes. In that time we have lady Jumbo being taken after a rampage in the circus and Dumbo gaining his confidence and flying in front of a crowd, they even do a recreation of the famous scene, although in this case the kids are involved. Then we move into this rather strange moment where the circus acts are all moving to this new location called Dreamland which is run by a tycoon named V. A. Vandevere, played by Michael Keaton, who forms a partnership with the ring master, Max Medici, played by Danny DeVito. He wants to use Dumbo to be a new attraction to the theme park and is also setting up with an act for his girlfriend, Collette, played by Eva Green, who is a high rise acrobat to do an act with him. Good god, how do you manage to complicate a Dumbo movie this much!

Ok, I am going to honest and say straight out, the Dumbo remake is not a very good film, so I’m going to start by talking about the positives I found with the film. For one thing, the CGI is not too distracting, and Dumbo’s personality is mostly intact for the most part. The other factor you should also be really thankful for, as is expected, this is a Tim Burton movie so as a result it’s very grandiose and it has its usual thing about outsiders, something that I don’t expect him to stray from anytime soon. Burton really should be the right choice to direct a Dumbo film, so it feels really bad to say that it feels as though most of the goodwill I had for him with Big Eyes seems to have slipped away.

Ok, there are also some good news in the fact that some of the plot lines do work, but if there’s anything that is holding this film back it’s both rushed and confused. This is one of the most confused films I have seen all year. It’s trying to juggle a couple of plots and to a certain extent the films feels more about the kids and their dad, if anything Dumbo is actually kind of an afterthought. Dumbo really doesn’t play as big a role this time round and I was actually surprised how many scenes could go by without him playing much of a factor. Now, they did get his personality down right and Tim Burton does use some interesting camera editing to convey Dumbo’s internal thought process through visuals alone. But it is ultimately just kind of “meh”, that’s this film in a nutshell, it’s very “meh”.

I’ve already mentioned the fact that they speed through most of the 1940s film in the space of about 15 minutes, but there are a few more problems with that, the famous song is kind of ruined by the fact that it’s actually one of the circus acts that sings it this time round, which guts the scene. The film never really decides what it wants to do, it has far too much going on. As a result, many characters are rather inconsistent. This is most notable with Danny DeVito, who I swear Burton set up tonnes of plot lines for him only for them to fall down or be forgotten in later scenes. By the way, who would have thought this film would be a Batman Returns reunion for Tim Burton, Danny DeVito and Michael Keaton, speaking of which, Michael Keaton’s character is the villain this time round, another of many, many characters invented entirely for this film and he hams it up epically. This is one of the funniest roles he has done in recent memory, it’s laughable how he is in most scenes and how ridiculous the wig is that he has to wear for his character. Then again you’ve got an all-star cast in this film and it feels like they are all being stretched so far that there’s no time for any of them to shine, this is especially notable considering the fact that most of the characters from the original are gone. Ok, leaving the crows from the original film out is understandable, by today’s standards that wouldn’t really fly, no pun intended, but what the hell happened to Timothy? You know, the really important character from the first movie! I reckon if you accumulated up the amount of time he spends in the movie, you would read a total of two minutes and that’s if I’m being generous.

What’s more, this film also has another problem I have with a lot of Burton films, the environment feels very, very insular, a lot of his films suffer from having environments that feel as though they are in a sound stage, rather than a living, breathing world, you can see this noticeably in a couple of his earlier films, particularly if you go back and to Batman Returns, this is actually a prime example of this. Gotham in that film never feels like a fully functioning city since the streets are deserted most of the time and I noticed a lot of that in this film. Dreamland in particular feels far too enclosed. What’s more though is that Burton’s direction seems to have really hampered a lot of more about the film, for one thing, because of the serious amount of additions that have been made, it feels like a Burton film first and a Dumbo remake second and the ending is where it all goes insane. To a certain extent I was thinking the entire time, “really, this is a Dumbo movie, right?!”. I’m not going to lie, Dumbo is really not great. If I’m judging it as a Burton film, it is one of his weakest in recent memory, having come off the really good film, Big Eyes, and despite being rather average, I definitely preferred Miss Peregrine’s Home for Peculiar Children and this feels like a step down and step backwards to what was causing his films to fail in the first place, however, this is not a total disaster on the level of some of Burton’s really awful films, namely Alice in Wonderland, The Planet of the Apes remake from 2001, the Dark Shadows or the really poor Charlie and the Chocolate Factory and if I’m comparing it to the recent rise of Disney live action remakes, I would say it is a cut above Beauty and the Beast but that’s as far as I’m willing to go. I still much prefer the Jungle Book and Cinderella, compared to this film.

It’s kind of a mess and trying to be several things at once and never quite sticking to anything and as a result it doesn’t really work. I don’t see fans of the original film liking this and I don’t think this will be a nostalgic treasure for the current generation of kids and I think it says a lot that the next group of films are playing to the Disney renaissance generation. Dumbo is a film that should work, but it’s another case of a film that Tim Burton should be perfect to direct but is ultimately where his style overtakes the film. The acting’s not great, the script doesn’t really work and at its best moments, the film is painfully average. Save your money, there’s better films coming out and I suspect you would be better off waiting for the Aladdin remake.

With all that being said, thanks for reading this review, I hope you have enjoyed reading it as much as I have enjoyed writing it.
Calvin – Nerd Consultant
Share This Post: