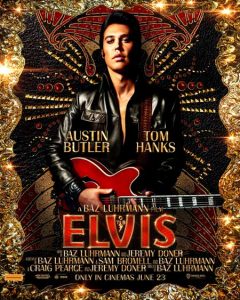 Elvis is directed by Baz Luhrmann who is previously known for films like Moulin Rouge and Great Gatsby, and this new one is essentially a biopic about the life of Elvis Presley- but even from the trailers it gave the sense that it would be in Baz Luhrmann’s typical style of filmmaking; over the top surrealism. He directs films like they’re music videos. You can definitely see this in Moulin Rouge and even though there’s no musical sequences in it, this is seen in Great Gatsby as well.

The film itself takes us through a lot of Elvis’ (Austin Butler) life and is narrated by Colonel Tom Park (Tom Hanks). I will say, if you know a lot about the life of Elvis, this film will not surprise you. It focuses a lot on his career, and it does have the traditional issue that famous musician biopics run into- in short, it’s basically the sense of if you want to put in the copyrighted music of a dead musician, you have to get the permission of the people that have a stake in the music; family estates, record companies, etc. So, we are essentially getting the Presley Estate version of events. So as a result, some of Elvis’ more problematic aspects of his life are definitely downplayed and its definitely eulogising Presley, though it doesn’t exactly make him infallible.

One of the problems I had with Bohemian Rhapsody was that it kind of boiled down Freddie Mercury’s life, Elvis in this film is definitely more complex. Though, like Bohemian Rhapsody, both of these films have a very strong central performance. I really like Austin Butler in this movie. The thing that really reminded me of Rami Malek’s performance of Mercury is that they both would have to play very physically active musicians with a lot of stage presence. Butler does a very good Elvis voice that doesn’t really move into parody, which is really emphasised by the stock footage shown at the end of the movie, and he can also really move like Elvis- which is something they really had to get right.

A large portion of the early film focuses on Elvis’ dance moves and was one of the things that got him into a lot of trouble- a lot of people forget that Elvis was investigated by government officials and even had a warrant out for his arrest, and the film actually also definitely pushes forward that Elvis was breaking down a lot of barriers of segregation when it was at its height (but I don’t know enough about that fact to say whether it was an accurate portrayal of events)

Austin Butler has to play Elvis during various portions of his career, since the film starts around the time that he signed with the Colonel and ends with his famous death. In fact, the film kind of tells the whole life story of Elvis! Which would certainly explain why this film has a 160-minute run time- yep, this film is long! It goes over two and a half hours. Butler does a very good job playing these different eras, and to be honest I was surprised that at no point did Austin wear a fat suit for the time when Elvis was at his worst health.

I’ve only taken a glance at Elvis’ career history, I’m not exactly a huge fan so I don’t know a lot- but from what I could gather the film is mostly accurate. It mostly focuses on the relationship of Elvis and his manager Tom Parker, and the fact that he basically controlled his career and his finances, blocking him from several ventures that he wanted to achieve as well as turning him into a more marketable image. The charges set against him are very much at the forefront of the film. The film actually opens with the Colonel being rushed to hospital, and much of the film is set in flashback.

Okay, I will say a couple of things with Tom Hanks’ performance. He does a good job, he puts on the accent, and the makeup work is very good. But Tom Hanks has a very distinctive voice and facial features- so despite the fact that the makeup jobs were very good and that he’s great with the voice, it’s still very recognisably Tom Hanks. I felt that the casting decision was to lull the audience into a false sense of security- have the guy who is famously nice and known for playing nice characters; but the opening of the film really spells out that he is not to be trusted, and that he is an unreliable narrator for this story.

The rest of the cast is kind of a mix and match, a lot of people coming and going. The only other two prominent cast members are Olivia DeJonge who plays Priscilla Presley, and usual Baz Luhrmann collaborator Richard Roxburgh, who plays Elvis’ father. Lots of people go in and out of scenes, but I will say that most of the actors give a good performance.

The musical sequences are actually really great, which is no surprise coming from the director of Moulin Rouge. Baz Luhrmann is a visualist, he does a really good job with the editing in this film as well, doing a brilliant job mixing imagery to enhance the musical sequences. They really invoke the classic imagery of famous black and white films he was in, and even Elvis’ love of old superhero comics. They really do a good job showing off why Elvis was such a charismatic performer. It really puts to the forefront that the reason for Elvis’ success was due to his female fanbase; he really had mastered sex appeal- and the cinematography is not subtle about it!

The songs are also a good selection. I don’t think that there are any famous Elvis songs that don’t make it into the final product. I think that the most heartfelt performance was during the filming of one of Elvis’ famous TV specials, which proved that he had the right song at the right time. The historical context of which being it came at a time when America was at a crossroads and was in a particularly bad state.

One of the biggest criticisms thrown against Elvis now was that he appropriated and capitalised on music already being done by black artists in the rhythm and blues genre; and the film doesn’t shy away from that complaint, but it definitely shows Elvis’ influence and gives a lot of those musicians the credit they deserve. BB King is shown in the film as well as Little Richard, and it all shows Elvis growing up and being integrated with that community around the time of the height of segregation which led him to be influenced by that genre. The film shows that his music was a mix of blues, country, and gospel. In fact, the film on numerous occasions shows a cut between the music that inspired Elvis to the music that he’s making at the moment.

While this film could potentially be glossing over the criticism, it at least attempts to give the credit to the musicians that pioneered the genre, which in my opinion means that the gesture comes from a good place.

Elvis is a really good movie. I really think that you should go see it while it’s still in the cinema, I think it’s the best way to experience it. Austin Butler delivers a great performance where he completely becomes the king and I really hope that he gets an Oscar nomination on the back of this film, and it makes me excited to hear that he was cast in the upcoming Dune Part 2. The film is a visual spectacle! It’s a very enjoyable film even if you aren’t that big a fan of Elvis’ music- though be aware that obviously some things are being downplayed because the Presley Estate needs to sign off on this film. If you can get around that, it’s a very, very good film.
Calvin – Nerd Consultant
Share This Post: