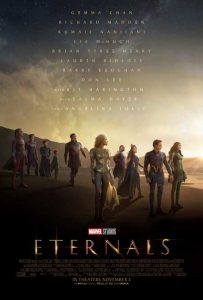 Eternals is the latest film in the Marvel Cinematic Universe, part of a very condensed year for the Marvel Cinematic Universe to make up for the lost time of not getting any films out in 2020. The film once again has to tackle introducing a relatively unknown team from the Marvel Universe, not only into the MCU but to introduce them to a wider audience. When it’s successful, it’s what I like to refer to as “the Guardians of the Galaxy effect”. Now, Eternals actually had a massive advantage going in to the production, with it being directed by Chloé Zhao who’s coming off the fact that she was this year’s winner at the Oscars for Best Director for directing Nomadland, and she has a hell of a cast to work with. You’ve got Salma Hayek, Angelina Jolie, Kitt Harrington, Richard Madden, Gemma Chan, Kumail Nanjiani, Brian Tyree Henry—there’s a ton to work with here. Now, I’ll be honest, I went into Eternals with not too much knowledge on the comic iterations of the characters so I have no idea if a lot of changes were made with this translation. Though, to be fair, given Kevin Feige’s direction for the MCU up to this point, I imagine there’s at least something.

Eternals’ basic plot revolves around a team of extraterrestrial beings from the planet Olympia known as the Eternals, who can never die, travelling the Earth to deal with the Deviants in order for them not to harm mankind. With their eternal life and lack of ageing, they have lived throughout most of history and it has shaped their attitude towards humanity. Now, after a very long gap the Deviants are back. And Sersi, played by Gemma Chan, after reuniting with her old boyfriend Ikaris, played by Richard Madden, must travel to reunite the team to deal with this new threat. Eternals is a very ambitious film. For one thing, it doesn’t really feel like a Marvel film. It’s not just the fact there are very few references to the MCU as the events of Infinity War and Endgame are brought up quite a bit. In fact, Kit Harrington’s character Dane Whitman even asks why they didn’t help fight Thanos (which by the way gets a really dumb explanation). But it doesn’t really have the tone and feel of a Marvel film. You honestly could tell me this was starting a brand-new franchise in its own universe and I’d believe you.

Now, the positives for this film: it’s great to see Marvel take a lot of risks by having a very diverse team of characters, and a lot of talk has definitely been around the fact that this is the first Marvel superhero film with an openly gay superhero. And it’s not something that’s just mentioned; he’s shown having a family with his husband, and I genuinely applaud the filmmakers for including this. I also think that the team dynamic is great. However, one of the biggest issues I have is that most of the stars in this film are kind of in it periodically. Without giving much away, a lot of the cast often are not in as much of the film as you’d expect. Salma Hayek was in way less of the film than I was expecting based on the trailers, and Kit Harrington is really not in this movie, but anyone with a knowledge in this character in regards to Marvel comics will know why he’s not in this film much. And there are actually moments where some of them just disappear for quite a while. Kumail Nanjiani, for example, is not in the film as much as I was expecting which is annoying because he’s probably the best part of it. And, side note: his chemistry with character Karun played by Harish Patel is also incredibly hilarious; I need to see more of these two on screen together.

I think people will be quite surprised considering that—maybe it was just me—I did not get a sense from the trailers that Gemma Chan would become the lead character. Now, that being said, Gemma Chan (who you might recognise from playing Mia in Humans) is a really great actor and she does do a good job carrying the film. I actually think she did a very good job playing the gamut of emotions for the character; there are a couple of plot twists she is involved in and she really sells it every time. And the performances I would say for the most part are alright. There are some flubs here and there with some scenes but overall, the cast delivered some quite good performances.

Now, if I’m honest, that’s kind of where by praise begins to end for Eternals. I will say the special effects are alright for the most part and the fight choreography is actually pretty good, though the Marvel films are starting to get pretty good at that. Where Eternals fails, is the plot. The plot’s not bad by any stretch of the imagination, but my explanation is really simple compared to what the actual film goes through. There are a ton of twists, a few too many if you ask me, and they kind of mess about with things way too much. This film is really complicated by the end of it, to such an extent that it occasionally had to stop and re-explain the plot through conversations with characters. What’s worse, there’s also the fact the plot is just a bit all over the place; it doesn’t fall apart completely but you can definitely tell it’s being held together by a thread. There is just way too much happening in this film, too many explanations rather than actions, and I think it’s because of the fact they have to develop about eight characters at once. The film really doesn’t save much character development for sequels; it really insists on getting to the heart of the entire cast. Thankfully, Kumail Nanjiani is here—without him, I feel like the film would have been seriously lacking in its sense of humour that the Marvel Cinematic Universe is known for.

What’s also bad about Eternals is that it doesn’t really have a great antagonist. The Deviants are set as an antagonistic force to begin with but they’re very animalistic in nature so they don’t come off as something which much personality. By the time the film does settle on an antagonist, it feels a little too late and unearned. This film also has the weirdest climax of almost any Marvel film; it’s very much a case of, ‘Okay, apparently that happened?’ What’s worse, I don’t think Eternals really has much of a feel to fit in with what the MCU entails. And I don’t think that’s just on the fact they’re introducing a new set of characters with a radically different mythology and setting of what came before. Shang-Chi came out earlier this year and had to do a similar job but it nailed it because they made sure to make it look and feel like it was still part of that universe, even though it was a martial arts-based film rather than a superhero movie. Eternals doesn’t really try to do that, and as a result, when it goes very much into being like a superhero film it feels rather as though it’s copying and pasting from other more successful characters. Ikaris, for example, is so clearly based on Superman I’m amazed Warner Bros hasn’t taken out a lawsuit. And Chloé Zhao even stated that she was basing the idea of the character from seeing Man of Steel so it’s not as if the comparison is unwarranted.

What’s more, I think Eternals is a little too long as well. It’s over two and a half hours; that is an Avengers-length film. But it’s not as if a lot happens in that time. There’s a lot of dead air and so much time spent waiting for the next event to happen. Eternals is an ambitious project but it’s all over the place, and while it’s not as forgettable as something like Thor: The Dark World or Iron Man 2 or even The Incredible Hulk, it definitely isn’t a well-scripted film and it seems to want to distance itself from the overall MCU so much that it might as well be in its own continuity. It really is kind of a mess of a movie. Without going into spoilers, by the time I came out of the screening I felt drained by how it all turned out. That being said, I do think you should see Eternals if you are a fan of the Marvel Cinematic Universe since they are setting up plot points and plot elements going forward, particularly with the two post-credit scenes, one of which directly sets up an Eternals sequel. And while the second one is a little cryptic, it is setting up an already future-announced Marvel film. If you’re wondering which one it is, after you see the scene look up an explanation site or video. Chloé Zhao has even gone on record to say what it is.
Calvin – Nerd Consultant
Share This Post: