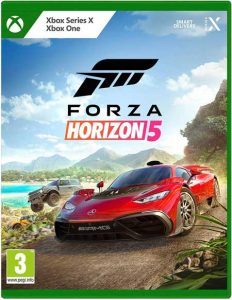 Forza Horizon 5 has arrived to be a major fixture of the Xbox holiday line up, alongside the upcoming Halo Infinite. The Forza games have done a great job using real world locations to create amazing and seamless open world arcade racing games. The country chosen this time is Mexico. The game however did not have too many new features compared to that of Forza Horizon 4, though given how good that game is, a lot of people were really going with the “if it aint broke don’t fix it” attitude. Once again you compete with various cars in several different events like: Road Races, Dirt Races, Cross Country Races and Street Racing with each of them, requiring a new discipline for the approach.

Forza Horizon 5 is one of the best Xbox Console exclusives to date and is really good reason to be excited about owning an Xbox. It has a few issues, but they are trivial at times and even some I’ve mentioned in this review is localised to me such as the soundtrack. However, the game looks and runs amazing, the open world is breath-taking and has tons of amazing locations and tracks and has tons of set pieces that make for amazing sequences. On top of that, there’s no other way of putting this, it’s just really good fun. There’s an addictive nature of “just one more race” or “I wonder what happens if I travel to that part of the map” or “if I just keep looking in this area, I can find the hidden barn with the rare car”. I really enjoyed my time playing this and I intend to keep going. I would really urge giving this a go, this is one of the best racing games out right now.

The game is on Xbox Game Pass so if you’re subscribed you can download it, though the editions that give you more- will cost you extra, so I would only recommend if you have trouble with racing games and want an advantage at the start. Other than that, if you’re just signing up for Xbox live now, this should be high on your list. Racing fans should put this to the top of their list of what game they should be playing next.