Godzilla: King of the monsters – Review 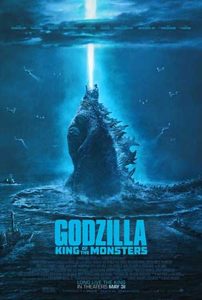 “GODZILLA: KING OF THE MONSTERS”

Godzilla, King of the monsters is the second entry in the recent Godzilla reboot for western audiences. As well as being the third film in was it currently being a kaiju or monster cinematic universe, with the second entry being Kong – Skull Island.

The franchise has certainly been through a rather rocky road. Kong – Skull Island did not perform as well in the box office as people had hoped and this Godzilla film seems to have had some real development troubles. Gareth Edwards directed the film back in 2014 and it didn’t exactly come out to universal praise. It’s been a very divisive film.

My personal feeling on Godzilla 2014 is that I actually quite liked it. Admittedly I wish there was more of Godzilla in the film, but they did manage to make human characters I was actually interested in, in any sense of the word. Though I really didn’t liked the design of Godzilla’s foes the Muto’s even which I found, bland, unitersting and clearly ripped off from Cloverfield.

Also, I didn’t like the fact that half of the fight scenes were either cut away from or happen in environments so dark you can barely tell what’s going on. But as far as a Godzilla film goes, it’s actually fairly decent!

Gareth Edwards is not on board for this belated sequel. Instead, in the director’s chair, we have Michael Dougherty who was a screen play writer for comic films, most notably X-Men II and Superman Returns. Though he has since moved in to becoming a director for horror films, particularly Trick R Treat and Krampus. He has also written a screen play for the next film in this franchise which is already in post-production.

Godzilla, King of the monsters is a film that I believe is going to be even more divisive than Godzilla 2014 given its reaction, so I really need to give my 2 cents on this.

The basic plot is that the Monarch, which is this universe’s equivalent of Shield, have been observing all the monsters since the first film was done. There’s an eco-terrorist called Jonah Alan played by Charles Dance who uses a scientist Dr. Emma Russell played by Vera Farmiga to unleash a monster in Antarctica called King Ghidorah in the hopes that they will in turn, wipe out most of the human race and restart things up. It’s the typical eco warrior, believing that by wiping out most of humanity they’ll end up sorting out half the shit that’s gone wrong. The only hope for humanity is that Godzilla can come back and defeat Ghidorah.

Okay, here’s a few of the things that Godzilla – King of the monsters does not fix.
The human characters once again are not too interesting. Though they are an improvement over the 2014 film. Does anyone remember that Aaron Taylor-Johnson was in that film for example? I sure didn’t until someone pointed it out! That’s even emphasised by the fact that they actually have returning cast members such as Sally Hawkins and she’s reprising her role. I completely forgot she was in the first one!

Another thing not fixed is that they didn’t manage to brighten up half of the action scenes again! I’m with James Rolph on this one, can we have one of these monster fights scene happen in the daytime?! This was made even worse by the fact that I saw the film in 3D, got the best possible screen (iMax 3D) and even though admittedly the fights scenes are easier to see than the first film, some day light fighting would be much appreciated. I think there’s only one that takes place in the daytime in the entire movie. It’s not as if this is done to cover up that they don’t have a special effects budget, they certainly do but man that has not succeeded on that front.

The casting is also a bit of an interesting one. It’s basically a lot of ‘Oh it’s him or her from that’. So ‘Oh it’s her from Stranger Things’ or ‘It’s him from Game of Thrones’. The cast including such talent as Carl Chandler, Vera Farmiga, Stranger Things’ Millie Bobby Brown, Ken Watanabe reprising his role, Ziyi Zhang, Billy Whitford, O’Shea Jackson Jr. The problem is, with such a large cast is that they are obviously going to be playing second fiddle to the special effects, but they’re often enough not given anything to do. I will say though, at least that most of the characters actually have a reason to be in the plot. The down side is, is that most of these characters are really dumb. They kind of make decisions like ‘Okay I have this plan; I have done the plan… now what?’ It’s almost as if they forgot there has to be a phase 3 to this plan and didn’t realise until they finished phase 2.

That being said, when the film is finally all is said and done, this film’s an improvement on Godzilla 2014. There’s way more of Godzilla in the film, the fight scenes are more interesting. The fact that Ghidorah makes it as the villain makes it a hell of a lot more interesting and Ghidorah has way more personality than the Muto’s did in the first film. Once more we get even more kaiju in this movie. We got Rodan as well as Mothra (who has one of the best introductions out of any of the monsters so far).

This might have been a film that’s been really spoiled by its own trailer but it’s certainly not an unwatchable film as a result. It’s a film that I would best describe as, it’s been made for fans. There’re tons of references to Godzilla. The original theme songs in places, the closing credits song is a redo of ‘Go Go Godzilla’ by Blue Oyster Cult. There’re tons of references to the films made by Toho, even some of the really obscure ones. I’d also like to say in terms of the human cast Ken Watanabe is one of the best things about this film, as usual.

What the film doesn’t do as good a job as the first one did was actually scaling the monsters to give us an idea of their actual size. In terms of fight choreography and using the monsters to the full effect, they seem to have done a much better job. I wish we were allowed to witness more of the destruction but that being said, when it’s on screen, it’s fantastic! What’s more, this film definitely has more of a sense of humour about itself than Godzilla 2014 did. When you’re doing Godzilla films, it’s important to have that because Godzilla is inherently ridiculous.

The themes have seemed to have moved on. The original Godzilla was all a commentary to nuclear destruction from the second world war. These ones seem to be more eco-based. It still has this idea of humans causing their own apocalyptic destruction, but it certainly feels less apt here.

My biggest problem with the film is it seems to have been targeting the audience of fans who know about these films, so much so, it’s almost at the expense of everyone else. Yeah you could reference Godzilla vs Destoroyah all you want. I guarantee you that half of the audience in the cinema are not going to get that reference. I feel like that’s what’s going to divide the audiences. But that being said, as cheesy popcorn fun and being a pure blockbuster that you can just enjoy, King of the monsters succeeds at this for the most part.

Godzilla, King of the monsters is not really a perfect film, but I think it’s an improvement over the ‘taking itself too seriously’ 2014 film. It actually delivers what a lot of the monster fans have really wanted. The film has its issues and I think it’s going to be a very divisive film, but I stand by that I think the film is fairly decent and it’s nice to see a film that seems like it’s genuinely trying to please fans.

Just how far this cinematic universe can go is another matter, but we’ll save that conversation for another day. The kaiju cinematic universe will be back next year with the release of Godzilla vs Kong. I’m actually interested to see how the films go with trying to cross over these two films.

Well, next week I’m back for another comic movie I’m reviewing, X-Men Dark Phoenix.
With all that being said, thanks for reading this review. I hope you’ve enjoyed reading this as much as I enjoyed writing it.
Calvin – Nerd Consultant
Share This Post: