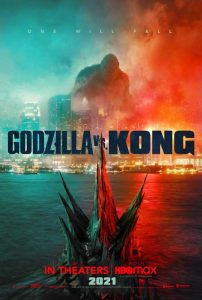 Well, thanks to Amazon Prime getting the rights to this one, I did manage to get to see this film just before cinemas reopened. And you know what? It was actually really good to see a new film again. While I would prefer that cinemas get reopened and that that experience is not entirely gone—since I think it will do more harm to the film industry than good—being able to see Godzilla vs. Kong would definitely be something I would really want more now than ever. And if Warner Bros were not willing to push this film to next month to be able release it in cinemas, well, this was probably the best way of getting it.

Now, this film is the first crossover film in the Warner Bros MonsterVerse. Though to say it’s a crossover is a bit of a stretch considering there have only been two Godzilla films so far and one Kong film, so it’s not as if this is an Avengers level of build-up. Nevertheless, this was the match we were waiting for. And to reiterate since I have reviewed two of the films, my thoughts on the previous films were that Godzilla (2014) was alright but they really needing to put more emphasis on the action, and there were some bafflingly bad decisions in that film, particularly in regards to the fact that you can barely see some of the fights and the design of the new monsters is not great. Kong: Skull Island was actually very enjoyable; I really liked that film, and while most people didn’t have a favourable opinion of Godzilla: King of the Monsters, I thought it was a pretty nice send up to the home movies that inspired these films.

Godzilla vs. Kong takes place after the events of King of the Monsters and mainly resolves around trying to avoid a clash between the two monsters whilst a team of scientists try to get Kong to his ancestral home. And at the same time there’s now a new shady organisation that Godzilla appears to have been targeting, and the protagonist from the last Godzilla film is looking into a conspiracy behind that organisation. Honestly, that’s one of the biggest problems I have with Godzilla vs. Kong: it’s very disjointed. For one thing, it doesn’t entirely feel like a crossover since the majority of the cast members from the previous films are absent this time around. Okay, it’s understandable there’s virtually no one from Kong: Skull Island—the franchise has had a significant time-skip since that movie, but most of the Godzilla film’s cast is gone. I don’t understand why these films never seem to want to have a stable cast; they tend to replace the entire cast with each movie. And also, the other problem I have with this film is the fact Godzilla is not really a significant part of the film; it’s really a Kong film again that happens to have another Godzilla film sort of bolted onto it.

Granted, if there is one area where it is succeeding it’s in the fight scenes as I actually think these are some of the best monster fights we’ve had so far. They do have some decent shots in these films that really emphasize the scale of the monsters and, more to the point, they took the biggest complaint everyone had in these films and had some of the fights shot in the daylight with no rain so I can actually see the monsters! If there was one critique they needed to take from Skull Island, I’m glad they picked this one. And the fight scenes are fantastic. There’s only one fight scene that’s shot at night and they made the wise decision to have the fight scene take place in Hong Kong which is a neon-lit city so, again, we can see everything the monsters are doing. Now, there are some other Easter Eggs that haven’t been shown up in the trailers which I won’t spoil but, trust me, they did an excellent job with bringing one aspect of the Godzilla film franchise into this one.

The cast: it’s a bit of a take-it-or-leave-it. I personally have never thought any of these films have really had that good of a cast—with the possible exception being Kong: Skull Island—and this is no exception. The performances are mostly just alright. But one of the things I also noticed this time round was that the film is really short. It’s better than it outstaying its welcome trying to pad the runtime but this film runs just short of two hours, and again that’s probably one of the reasons why Godzilla doesn’t really get to do much. He’s mostly in an antagonistic role this time which feels weird considering that throughout the entire monster universe that has been building up he’s been in a protagonistic role. I’ve seen heel turns in wrestling that have happened slower than this and have had better build-up. I know they said they had a line in the last film saying how long Godzilla was going to be on our side, but I think you need a bit more than that to anticipate the idea that Godzilla’s suddenly going to turn against humanity.

And it also brings up another thing about these films: I never can understand the level of thinking and intelligence these monsters have. This one is another fine example of how they keep changing their minds over whether Godzilla is incredibly intelligent or just an animal acting out of instinct; they really need to pick one and stick with it at this point, especially if there’s plans to go any further with these film franchises. And, for the special effects, they’re as you’d expect: they’re really good for the most part. I think the most creativity is used in the sort of Kaiju realm that’s introduced partway through the film. Not to spoil anything but this is where the staff got to be the most creative with the special effects and there were some very cool set designs as well on top of that. But there are some effects that don’t look so great. There’s one in particular that I really want to point out but I can’t without spoiling a big factor about this film, but let’s just say one of the special effects doesn’t look as good as I would have hoped.

Also, if you’re hoping for some follow-up on the post-credit scene of Godzilla: King of the Monsters, I’m sad to say it doesn’t get followed up, which means Charles Dance’s role is even more insignificant than it was before. You took a villain that was largely pointless in the last film and kind of made them now entirely pointless; they really need to bring back this character in a future film and have them do something or their entire reason to be there was just a means to an end. But the thing that really can be taken from this film is that I think this is the one time they really did a good job putting the focus on the monsters and having it stick, and that’s something I wouldn’t mind them going forward with in future films.

Godzilla vs. Kong is not exactly a special film but it could have been way worse. This one’s directed by Adam Wingard, and while I haven’t liked all of his films, particularly his pretty bad adaptation of Death Note for Netflix, I think he does quite well with Godzilla and King Kong. You can definitely tell he has a little bit more understanding and passion for these characters and I definitely get a feel that there’s a real sense of passion in the creative team behind this one. It’s just a shame that the film feels rather short and insignificant and is trying to juggle quite a few plot points without really figuring out a way to make sure they all feel coherently part of the same production. It’s not a mess; it’s a pretty good film all things considered, but I think they could do some more interesting ideas going forward. As much as I think that now would be the time to sort of take a step back from this idea considering that they’re kind of running out of places to go with Godzilla, I do hope they continue until we get a decent film. We haven’t had a truly bad film in this franchise so far, and I think that’s a positive we can take.
Calvin – Nerd Consultant
Share This Post: