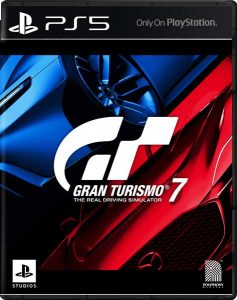 My experience with GT7 is that I have beaten the story mode with all 39 menu’s completed.

This entry was developed by Polyphony Digital who have been developing GT since the original back on the original PlayStation in 1997, so they have a long history with the franchise and this being the first GT entry on PlayStation 5 expectations were high.

The graphics for the cars are some of the best in the industry especially in 4K and HDR in effect.

All the cars look great and the tracks are beautifully recreated, as the tracks also have a day and night cycle where if you drive for long enough you can see the time of day change and driving at night makes a big difference as without your headlights it is almost pitch black recreating driving at night in the real world.

The game also features dynamic weather where you can see water pool on the track in real time making racing much more dynamic as you try to avoid them if you do not have the proper tires equipped and have to change your driving style since there is a real risk of aquaplaning in the rain.

Then when the rain does pass you can see the puddles evaporate in real time as the track begins to dry when the rain clouds pass from overhead.

There are over 30 tracks in game using real world locations ranging from The Tokyo Expressway through the middle of Tokyo to Nürburgring from Germany.

All the tracks are great adaptations and are a joy to race around with all the cars available and in my opinion there is not one bad track to drive one, my least favourite probably being the dirt tracks but they can still be very comical to try and drive around without constantly crashing.

With over 400 cars in game to collect, there will always be plenty for the player to buy and keep playing for down the line for a very long time, as a lot of car companies are represented here so car fans will be satisfied with the range.

Most types of cars are here from small hatchbacks with the old fiat, all the way up to the supercars with the Lamborghini. Then players can even choose some pickup trucks to break up the monopoly and take them onto the dirt tracks if they cannot afford the proper rally cars yet.

Scapes is the photo mode for GT7 and allows players to take photos of their cars in a variety of locations from tracks to cities.

There is a great amount of features in it where you can manipulate the lights and colours to really make your car stand out against the environment especially if you have customised the appearance of your car with a unique livery and want to show off how it looks in a wide range of locales.

Multiplayer returns for GT7 with both online and local split screen multiplayer, with upto 20 players supported for online races.

The online component uses the same set up as the last game with 3 daily races and that there is no option for using default cars so you can only use your tuned up cars from the single player.

You can increase your ranking through racing online from E – A+ then finally S, then to improve the online space there is the new SR rating that will decrease if you do more to negatively impact other players (Like purposefully crashing into them).

This will hopefully make the online mode a more pleasent experience but could penalise other players unfairly if it was just an accident.

Then there are also tournaments that are held regularly and are open to players of a high enough ranking, then performing well with reward you with more championship points.

Story mode takes the form of “Menu’s” in a new cafe where you fulfill a menu for every level for the story mode.

There are 39 in total and involve you collecting 3 specific cars in a collection e.g. 3 Ferrari or by taking part in championships.

These are pretty fun as you get given a fair amount of cars for your trouble and takes you to every track in the game as well as rewards you with a lore lesson about the car company as well as the model of cars you collected.

GT has always had a great OST and this game is no change and even brings back plenty of songs from the older games, so there is always a song for everyone to drive along to with a great range of songs available.

The game does a great job of breaking down the history for each car as well as for the majority of the car companies with the museum sections for each company.

The player is also rewarded with more lore through the story mode where players find out the history behind one company and a particular series of cars and how they effected the automotive industry.

Players can use in game credits to purchase upgrades for their cars to improve all aspects of them from the visual design with the body work to internal components like the engine and exhaust.

Players can even download livery’s designed by other players to put onto their car and they are easy to place on most parts of the car.

Players can customise their helmets and suits with custom designs and also use designs that other players create.

The big standout being the “Anime” section where players have created outfits that make you look like the Power Rangers or the RX 78-2 Gundam.

A major problem I have is that the game needs a constant internet connection to even play the single player portion of the game.

This was ridiculous as during my review the game went down for server maintenance for over 30 hours and during this time I could not access the single player aspect of the game outside of the music mode or a single race.

This is a disaster as for players who are suckered into buying the cars using microtransactions can not even access them in the garage or photo mode, the DRM should only be used for multiplayer and not for single player as there is no actual benefit for it regardless of the corporate PR.

So if players lose their internet access then they cannot play this game that they purchased for full price essentially turning it into a brick.

In the UK the microtransactions top out at 2,000,000 (2 million) credits for £15.99, which is always promoted as the best offer and out in your face. Even when going to the game on the home screen the microtransactions are on prominent display on the right of the screen like the developers are proud to show them off.

Also compared to the previous game where you could buy cars individually for real world money, now you can no longer do that and instead have to spend way more on microtransactions to purchase the car.

For example people on reddit have found out that the Porsche 919 Hybrid 16 (which can be bought for $2.99 in Gran Turismo Sport) can now only be bought for 3,000,000 credits, which would require the player to spend at least $40.

Then there are other “Legend” cars with a price tag of nearly 20,000,000 credits worth so that nearly £160 for ONE CAR, that is inexcusable in my opinion.

In the recent patch for the game (That came after the game was forced offline for 30 hours where the game could not be played btw) the developer Polyphony Digital decided to reduce the payout from most of the races.

This was done to entice players (especially younger players since the game is age rated 3+) to skip grinding for credits and instead use real world money using this predatory tactic to instead buy their way to instant progression and lose track of how much money they are spending since multiple purchases of these microtransactions will be needed to purchase the most expensive cars in the game.

All dialogue in game is only shown in text boxes with no option for voice acting, so the player just finds themselves mashing through text boxes to get through the heavy dialogue.

There is a really great game here that is unfortunately bogged down by egregious abuse of corporate greed with the use of microtransations plus an extended grind means I cannot score this game higher than I have.

I would not recommend this game at this point as it is too much of a chore to get through and would instead recommend other racing games while GT7 is hopefully fixed.

This a 25th anniversary that fell flat on its face due to the decisions of the higher ups to wring out as much money as possible while doing the bare minimum over from the previous game.