Carly Posted in News — No Comments ↓
The Guardian –
2nd September 2017 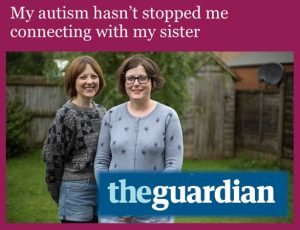 Sisters Anneliese and Kirsten Mackintosh are close, but autism and depression have not always made things easy. So how did they learn to connect?
My sister, Kirsten, spent most of 2014 and 2015 sectioned on a psychiatric ward. While in hospital, she stuck a sign on her bedroom door. “Please don’t ask me how I am or how my day has been,” the sign said. “I really struggle with such vague and open questions.”

Kirsten is 33 and has autism spectrum disorder, as well as obsessive compulsive disorder, severe anxiety and depression. The path to finding this diagnosis has been complicated. Over the years, medical professionals posited that my sister may have had schizophrenia or borderline personality disorder, among other things, but for a long time, there was no definitive answer. Finally, in 2014, aged 30, Kirsten was tested for autism, and the results have enabled her to access the appropriate support.

Before I began to understand my sister better, I found it hard to know how to behave around her. She cried often, yelled if I asked what was the matter, and grew agitated by – what were to me – tiny things. Our relationship was particularly troublesome when we were teenagers and in our early 20s.

I am a year and a half older than Kirsten, and as her big sister, have always felt protective, but have not always been a good influence. I have also had depression and anxiety, and, for a long time, I used alcohol as a coping mechanism.