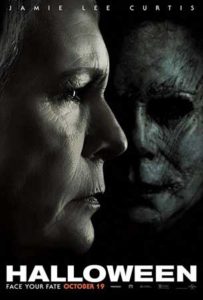 Halloween (1978) is one of my favourite films. I am a huge fan of the original film, which not only started the slasher genre but also set the template for how all these films were going to appear in the future, you have to really give credit. It’s also directed by one of my top 10 favourite directors of all time, John Carpenter, who also directed my favourite horror film, The Thing.

Now normally I talk about very long running franchises with tonnes of sequels, now believe me Halloween has had tonnes of sequels, its normally where I say the other films are not that great but Halloween is actually one of the few exceptions to that rule. Well none of the films have been too amazing, they’re not exactly what I would call exceptional, but they’re very passable films which do a very decent job. There are only 4 appalling films out of the now 11 films. Those films being: Halloween 6: The Curse of Michael Myers, Halloween Resurrection and the two appalling Rob Zombie reboots which failed miserably, mainly because they gave Michael Myers too much of a back story. This is something that would not go away with the Slasher genre.

Rob Zombie had actually battled for several years to try and make a third Halloween film, even trying to incorporate 3D into the mix. After his last two efforts receiving such appalling reviews and not doing well at the Box Office, so he was denied that.

Halloween seemed to be one of the few Slasher franchises that hasn’t really been seen for most of the decade. This joins such other franchises such as Nightmare on Elm Street which hasn’t been seen since 2010, Friday the 13th which is constantly being listed as being in development despite the fact we haven’t seen a single film since 2009 and the closest which is probably Texas Chainsaw Massacre which did see a 3D film come out in 2013, but has since been entirely absent due to that film making a tonne of money in opening weekend and then bombing hard the next week.

Unlike many of these films, John Carpenter is involved in the production this time, although he’s only there as an Executive Producer. The film has been directed and co-written by David Gordon Green, a Director I was not that familiar with prior to this film. He has mostly done television work for series like Red Oaks, but he also directed Pineapple Express, which is probably his most high profile job up until this point. He has also co-written the script along with Danny McBride who is a name that you probably would recognise and realise who he is if you look at his IMDB page and Jeff Fradley who has also worked with Green on Vice Principles.
This film boasted to be a back to basics. The question is really, how did it all pan out? If you’re going to this film not wondering exactly how the timeline works, here is the basic gist of it. This is rather like H2o which was the 20th anniversary of Halloween, this one is another 20 years later, this is the 40th anniversary of the original film and has erased all sequels, thank fully Rob Zombies film, positioning this as a direct sequel. If anyone’s questioning it, because I was when I went into it, you establish Halloween 2 hasn’t happened, though it does create the question of how Michael got caught after that film ended but really by this point just go with it.

Being set 40 years after the events of that film, a couple of bloggers come by to the institute that is housing Michael Myers, trying to get answers out of him, the man hasn’t spoken in the 40 years he’s been imprisoned. They then present him with the mask which drives him nuts, and he quietly contemplates an escape.

Meanwhile Laurie Strode, played once again by Jamie Lee Curtis, has been preparing for him coming out, fortifying her house, developing several defence measures and buying several guns. This is much to the detriment of her daughter Karen, played by Judy Greer, as well as her granddaughter Allyson, played by Andi Matichak. Now Michael is back on another killing spree, and despite it being 4 years later he doesn’t appear to be any less brutal than before.

There’s a lot of positives to Halloween, but let’s get a few negatives out the way. While this film does make some quite clever throwbacks to the original film, there’s far too many of them. I was actually enjoying them initially and thought it was quite a decent call back to the original film, but you get to a stage when you’re thinking they’ve done too many. I’m kind of staggered by some of the plot twists in this film. There is one plot twist around half way through the film that I easily could have seen coming. By cutting out Halloween 2 they also establish that Laurie is not Michaels little sister who he failed to kill on the night when he was a little boy. So, his pursuit of Laurie in this film doesn’t make as much sense. They try to go with this angle that it’s a hunter pursuing his pray and this has been his obsession for years, but really, why? The extra motivation might have added to it. I suppose they didn’t want this film to be too much like H2o considering how much its borrowing from that film, but it does kind of stand out a bit.

Okay, let’s get down to the good points. It is certainly a much better film that the other sequels and remakes. Halloween 2018 knows exactly what it wants to be. It’s a back to basics Despite the fact we have this image in our head of Michael killing tonnes and tonnes of people, he doesn’t actually kill that many. In fact, I think he only killed about 5 people in the first Halloween.
Props to whoever did the cinematography, there is some excellent one take panning shots, which allows us to see in the mind of Michael Myers as he stalks people and there is a variety of victims. A lot of scenes in the film know how to build tension and its one of the few horror films that uses darkness to its advantage, rather than to cover up the cheapness of the film, kind of ironic considering how much of a budget the original Halloween was under.

You do have to wonder though, how Michael Myers is this agile, considering he must be in his late 60’s within the films timeline, seeing as the original film takes place in 1978. The actor they got to play Michael Myers is quite interesting. We never see his face, which does mask the age demographic and he is a decently imposing figure. There is a bit of an obsession with people trying to get him to talk, which might not have been intentional, but is a massive screw you to Rob Zombie for when he got Michael to talk in Halloween 2. Yeah, I’m still bitter about that.

At the centre is Jamie Lee Curtis who is once again excellent in these films. Every time she comes back she seems to prove how much she really cares about the character, this is no exception really adding extra dimension to Laurie as this damaged sole that’s been desperately preparing for another showdown. The film builds to the showdown really well. One of the things not given enough credit though is Judy Greer’s excellent performance as Laurie’s daughter, Karen. As well as the performance from Andi Matichak an up and coming actress, who played Meadow in Orange Is the New Black. The performances in this film are actually all pretty good, including Will Patton, Haluk Bilginer and also some of the miner performances. There are a tonne of excellent character actors and people that appeared in smaller roles prior to this, giving them a real chance to shine.

The biggest praise I can give to this film is that its rated 18, YES! Thank god! I am so sick of horror films being rated 15 and 12 and being toned down to get a teen demographic on half terms and weekends. This is a full out proper horror film as a result they can go everywhere with the gore and violence and they do it to its full degree.

Some of these effects are actually pretty brutal, props to the special effects department for doing this. It also really adds a tone of suburban feel on Halloween night, which adds to a sense of realism which has been missing from the series quite a bit. It almost feels like this film really does once again examine its idea of what if a Slasher villain actually took place in the real world. If you notice something a lot of these Slasher films are in very isolated areas, which adds to the sense of helplessness. By doing it in a suburban area, which feels like a rather safe environment, they add an extra dimension of real terror, by making the whole thing feel very real.

Halloween 2018 is not a great Slasher film, but it is a really great back to basics film, and I’m hoping any success it has in the box office will lead to other franchises like Friday the 13th and Nightmare on Elm Street to do the same.

The film has excellent cinematography, excellent writing and I’m really quite happy with the way it turned out. It does have issues of feeling like your treading water and it doesn’t really push the franchise any further, but at this stage I fell it is perfectly fine and serviceable. Maybe my bar of judgement has been lowered a bit, thanks to the Rob Zombie re-films, but really, I’m not to bothered and I give excellent props to the performances of Jamie Lee Curtis, Judy Greer and Andi Matichak in particular. Yeah, some of the characters are a bit too broad and over the top, but really it’s a Slasher film based on a franchise going back to the 70’s what more do you want.

Honestly this has been one of the best horror films of the year, just by simply not sucking in anyway. That is unfortunately the last horror film I’m going to see in October, since studios don’t seem to think it’s a good idea to release tonnes of horror films around Halloween anymore. So next week I am going to review the Bio-pic about Freddie Mercury which has been in development, its Bohemian Rhapsody.

With all that being said thanks for reading this review, I hope you’ve enjoyed reading it as much as I’ve enjoyed writing it.
Calvin – Nerd Consultant
Share This Post: