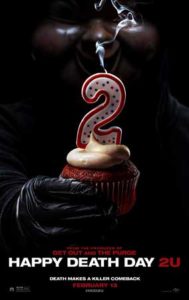 Happy Death Day was a real anomaly when it came out. It was a surprise hit especially at the box office, which was surprising considering that horror films don’t tend to make a lot of money in that environment.

Happy Death Day doesn’t really need a sequel. The first film wraps up the plot rather nicely. Overall it is a pretty decent film, but, I kind of wish they had just left things where they are.

Once again this film is done through Blumhouse Productions and is written and directed by Christopher Landon. Though I should stress that the original story was written by Scott Lobdell, a comic writer for DC comics, known for doing a couple of decent story lines, though he is also infamously known for his terrible run on Red Hood and The Outlaws, as well as terrible work with the Teen Titans. But credit where credit is due, Happy Death Day is one of the stories that I actually genuinely like.

FURTHER WARNING: There will be spoilers for the first film.

Happy Death Day 2 takes place about a week after the first film. The film initially has us follow support character from the first film, Ryan, played once again by Phi Vu, who after going through a rather weird day ends up being killed by the thrasher baby-faced killer from the first film again. Immediately after this becomes apparent, Tree, played once again by Jessica Rothe, discovering the cause of the events of the first film and during an accident, ends up falling back to her birthday the previous week, now having to like the day again, knowing that this time the killer is after her and all her friends.

Ok, I’m going to level with you, this is a minor spoiler, but I am unable to talk about most of what I think of this film without mentioning it. So if you want to go into this film blind, this is your last chance.

So the film establishes that Ryan is working on a project with two other students, which has actually created powerful dimensions and time skips. So there is your solution to the first film.

This film is summed up in two words: unnecessary and over complicated.

It seems like they had to insert rules everywhere. While the first film actually had some pretty interesting ideas, considering we got a pretty atypical horror antagonist, in this film there is just not enough of that.

This is one of the dumbest films I have seen in a while. It is phenomenal how much this film got me to care so little.

So this film is essentially once again a ground hog day slasher, but this time there is even less killing, since it is more about Tree memorising several calculations to send her back to her own dimension. Then there is also a few little twists which throw things into the mix, considering that, well, again, minor spoiler, Lori, from the first film, isn’t the killer this time. The actual solution to the mystery might have been interesting if they ever put any emphasis on it, but, this film barely does.

The eureka moment of the first film actually had a point and was kind of shocking since they actually made it a major focus, this time it is not really a focus. In fact the horror from this film has been cut almost entirely. There is very little action, well very little anything in this film.

I will give the film credit. It did actually do a very good job of subverting what I was expecting given the trailer for the film, but man, do they try way to hard. They do actually have some interesting ideas, but they let them wander. In fact they actually kind of bring up the explanation and ruin the whole point of the first film.

The first film was all about Tree learning to make the most of life and coming to accept her mothers death and celebrate her birthday properly. Given how hard it is for her, with not only her mother being dead, but she also shares a birthday with her. This film tries to add an extra sort of moment like that. It’s the thing that probably works the most about the film, but, it doesn’t quite work. The films throw away line actually kind of points it out. Here is a tip movie, don’t do my job for me.

What’s more, Happy Death Day has a very low body count, so slasher fans will not get what they want. The performances are actually generally decent and they do give you something to work with, but the script fails them constantly and I was so wishing they would get a decent line here or there.

Man, the horror fails and the comedy is not much better. There was a couple of funny lines I liked in there, but ultimately it didn’t really work so well. Again, I am trying to avoid spoilers as much as possible, but some of the dumbest parts of this film were the decisions they’d made that would ultimately change all the elements of the films.

Fortunately this will hopefully put the cap on it. Now there is a twist early on in the film, that might support a third film, but, that twist should have been handled in this film. Seriously, they bring it up early on and it is never mentioned again. Considering how monumental they treat it, I genuinely wonder if it is a deleted scene from another movie concept they had, which they changed their mind half way through, then forgot to take the scene out.

Happy Death Day 2U is a film with good intentions and some memorable scenes, but it is ultimately a film that fails on both the horror and the comedy elements, leaving me feeling cold. I’m genuinely not a fan of this one in several ways. It feels like a film that as not had enough thought put into it.

What’s more, I can’t help but think that the film is a slight cash grab for Blumhouse, considering the surprised success? Here’s hoping they are going to be done after this film, because I definitely don’t want any more in this series.