Moment hero stranger steps in to calm down autistic boy suffering episode on train
Daniel Ball, 21, has been hailed a ‘hero’ by the boy’s mother after his act of kindness 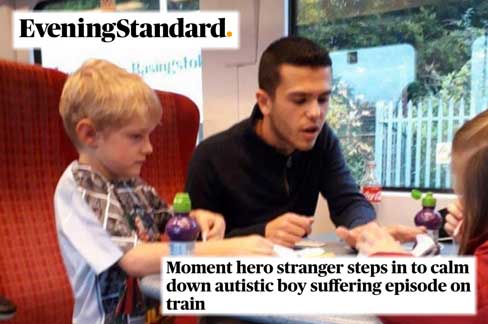 Lending a hand: Daniel Ball plays with Jack and his sister Amy in an image posted by single mother Gayna Pealling

This is the moving moment a young man stepped in to help an autistic boy who was suffering a difficult episode on a train journey.

Single mother Gayna Pealling hailed Daniel Ball, 21, “my hero” after he stepped in to help calm down her five-year-old son Jack, who has autism and ADHD.

She posted images of Mr Ball, who is a team leader at a recruitment agency, “distracting and playing with” Jack and his sister Amy, four, to Facebook and it quickly gained more than 129,000 likes.

The strangers have now joined forces to launch a campaign raising awareness of autism after the moment of kindness went viral.

Ms Pealling told the Standard: “If I didn’t have Dan that journey would have been a nightmare. When an autistic child has a meltdown it is hard.