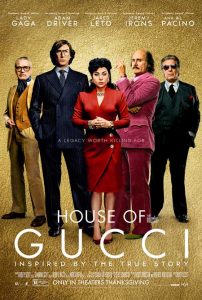 House of Gucci is a biopic directed by Ridley Scott. It is based on a book written by Sara Gay Forden, detailing the internal politics that created a major shift at one of the biggest fashion brands on the planet. Now, whether you’re a fan or not, Gucci has become one of the biggest global brands on the planet and makes an incredible amount of money every year. And it has had a major impact. This film is obviously made with the organisation’s blessing—the branding, the logos and the products are all in the film and there have clearly not been any licensing issues that the filmmakers have had to tiptoe around. Again, the film is not actually about the creation of Gucci and how it became a global megabrand; it’s more about how greed and politics created a massive rift within the family that started it all, just as they were about the enter the height of their success. The film begins in the early 70s and runs up to the mid-90s; anyone who’s kind of familiar with that story will know exactly what event closes the film. What’s interesting for me though is that fact it does have this major time shift but none of the actors are really aged up; most of them look exactly the same throughout the entire film, despite the fact that in some scene transitions, five to ten years could have passed. It’s a very bizarre choice.

The film is not really about anyone born into the family. It’s about Patrizia Reggiani, played by Lady Gaga, who marries into one of the sons of the Gucci family, Maurizio, played by Adam Driver. It shows Maurizio not really wanting to be a part of his family’s business but Patrizia slowly encouraging him to take more and more of a role. The film, if anything, is mainly about greed and power corrupting people and what it does to them. There are lots of happy smiles on the surface but below, there are massive power struggles going on, and I can definitely see why the film has been made now. Without giving too much away if you’re not aware of the story, let’s just say that anyone who could, is not able to legally object to their depiction in this, which is good considering that everyone comes off as awful. I honestly thought if the filmmakers didn’t have that luxury that this film would result in a lawsuit because no one comes off looking good.

There are very good performances in the film, I would say particularly from Lady Gaga considering how well she molds herself into Patrizia. And Adam Driver has to do a major shift partway through the film: he has to start out as a rather timid and unassuming person but then has to change his character up very quickly. He does this well but I also think it ties into another issue I have with the film, which we’ll get into later. The rest of the cast list also has to do something that Adam Driver doesn’t have to: they have to really mould their image. Not too many of the people are incredibly recognizable in this one; they clearly spent a lot of time in makeup to look like their real-life figures. The only one who’s very recognizable when you see her in the film is Salma Hayek who plays Patrizia’s personal sidekick, Pina. Despite the fact Salma Hayek has been billed quite high in this, she doesn’t actually get much runtime, though she does bring it when it counts. The cast list includes actors like Al Pacino, Jeremy Irons, Jared Leto, Jack Huston—it’s a very good cast on paper. Al Pacino does brilliantly in this role; you can certainly see some of his features through the great makeup job that’s been done but he works quite well. Jeremy Irons is similarly quite recognizable but he gives a very good performance when he’s on screen, though not totally unrecognizable with the makeup.

I feel kind of bad for Jared Leto because it really feels like someone was out to sabotage him—his makeup looks really weird. The whole thing is designed to age him up a little bit but he managed to keeps some of his usual facial features which is how I could tell it was him, but the whole thing looks bizarre. I also don’t know what direction he was given but it kind of feels like he’s meant to be in a completely different film. Granted, he’s one of the best parts of the film considering how much he hams it up but it feels a little bit out of place; I can’t imagine the real-life figure was this eccentric and over-the-top. And his Italian accent definitely needed work—he really sounds like he’s auditioning to be a resident of the Mushroom Kingdom in the next Mario movie. It’s actually a problem I had with most of the accents in this one. Most of them are trying their best to do an Italian accent, particularly a Tuscan accent since the Guccis are from that region of Italy, and the effects vary. Lady Gaga, Al Pacino, Jeremy Irons and Adam Drivers all do a decent job but you can also hear their American—or in Jeremy Irons case, British—accents trying to break through. It’s never really entirely convincing per se.

Speaking on another point, I feel the direction of this film is all over the place. The humour whenever it’s brought up feels either a little bit insensitive or really not for the right film. There is a decent plotline going forwards; it does follow historical events accurately from what I’ve heard, but it also feels like there’s a lot of dead air in this film. There were a ton of moments where I felt certain scenes could have either been cut down a little bit or cut out entirely and it wouldn’t have made much of a difference. The film is just under 2 hours and 40 minutes and it is way too long; if you cut 10-20 minutes off this film, I think it would have a decent runtime. It’s just a personal thing for me but I don’t really like having overly long films about really awful people being arseholes with no leverage to really take my mind off it. Don’t get me wrong, I don’t mind flawed characters; I think they can usually be the most intriguing ones to watch, but you have to offset it with something and I don’t think this film does that. Granted though, Ridley Scott is working with having to abide by real-world history.

I feel like the biggest thing that flubs House of Gucci is the direction. I feel like the actors were given a lot of different direction to work with and it means that much of the film feels inconsistent. House of Gucci is an alright film but it’s bogged down by an overly long runtime and some weird decisions that kind of muddle it up a bit. It does make the smart decision of not emphasizing too much about the Gucci brand; it’s more about the people who were behind the brand at that time. And I think, overall, the film for the most part works. It is a well-put together film when it is working but I think the team needed to reign in a few of the stranger choices and have a more consistent tone throughout.
Calvin – Nerd Consultant
Share This Post: