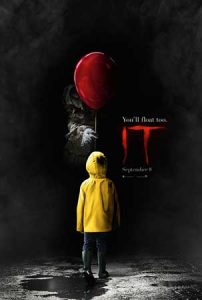 Over the course of his extensive career, Stephen King has unnerved audiences through chilling tales of the supernatural and profane, the most iconic of which having been retold through the medium of film.

Misery, The Shining, Carrie, It. All are benchmark titles that evoke fear and truly showcase the mastery over the horror genre that King possesses.

It, written in 1986, received an adaptation in the form of a two-part TV miniseries starring Tim Curry as Pennywise the Dancing Clown, a demonic shapeshifter who is sustained on the terror of children living in the backwater town of Derry.

Receiving immediate popularity and cult status, It sparked a worldwide fear of clowns still seen in the media to this day. Thinking back to 2016, you may remember a series of incidents involving individuals dressed up as clowns threatening schools and haunting public areas – many attribute this craze to widespread horror characters like Pennywise. This cultural fear we have of clowns has had a knock-on effect on large industries such as McDonald’s, who have chosen to keep their mascot Ronald McDonald on a relatively low profile.

Indeed, 2017 seems to be a good year to capitalise on the global discomfort caused by clown-related incidents.

And capitalise it does.

In addition to the discomfort caused by these creepy clown-related happenings, It and its setting also seem to ride the waves of success brought to us by Netflix’s Stranger Things (an absolute must watch, with season 2 due to be released on Hallowe’en of this year).

Featuring a rag-tag group of juvenile outcasts, Stranger Things embodies the ‘Goonies’ effect of 80s ensemble casts featuring child actors. It mirrors this, as we are introduced to a group of youths who call themselves the ‘Losers Club’.

Set in the insular town of Derry, Maine, It follows the summer escapades of the aforementioned Losers and their clashes with a horror beyond time, most often manifesting itself in the form of Pennywise the Dancing Clown (Bill Skarsgård).

This shapeshifting evil (named ‘It’ by the Losers), possesses the ability to take on the shape of a child’s innermost fears, which it then proceeds to feed off as it devours those it captures. For the Losers, children raised on dysfunction and trauma, It embodies their confrontation with repressed issues, and obstacles in the way of their development.

Experiencing disquieting visions relating to each of the children’s individual fears, the Losers come to the realisation that an unseen evil haunts the town and explains the above average disappearance and death rate, as well as multiple tragedies that have occurred within the town.

With a resolve to unearth the marauding power that lurks in the Derry sewer system and prevent further attacks on the local populace, the Losers must face Pennywise, and in turn their own nightmares, to release the town from the clutches of terror.

Though It has been praised for being a dedicated interpretation of the original novel, some themes are glaringly obvious in the way they have been translated, and frankly it feels ill-fitted to the overall feel of the movie.

What I mean is that the level of depth among the main cast is inconsistent. Bill, being the focus of the ensemble, takes on the role of leader of the Losers against the murderous clown, having a personal reason to do so once he discovers the reason for his younger brother’s disappearance. Ben, the new kid, feels the need for acceptance among the group that seem to be his first real connection in Derry, and stays true to supporting them through the hardships they face.

Beyond this, the focus of the other children seem to reduce them to nothing more than their dysfunctional upbringing, leading to a shallowness of character that is to their detriment:

Bev exists as a glaring metaphor for the cusp of womanhood, being shown buying tampons, being buffeted by a torrent of blood from her bathroom sink; in addition, she struggles with her sexually abusive father, a fact that is exploited for shock factor by the writers, and indeed, by Pennywise.

Stan’s fear stems from a painting of a warped-faced woman in his father’s office at the synagogue. The two focuses of Stan’s character seem to be his fear of the woman in the painting, and his lack of study of the torah, leaving a lot lacking in the greater nuances of his character.

Eddie’s hypochondriac nature stems from his mother’s overprotective upbringing, using placebo medication to rein in his childish nature and justify separating him from his friends. Pennywise manifests to Eddie as a personification of rot and sickness, feeding on his desire to avoid any form of infection.

Orphaned at a young age due to a house fire that killed his parents, Mike lives on a farm on the outskirts of Derry with his grandfather. Scolded for not putting down the farm animals by his guardian, Mike’s reluctance (and eventual acceptance of his role on the farm) marks a departure from innocence for the boy, and wrestling with the loss of his parents provides a rich canvas for exploration into his character. Though in terms of actual screen time, Mike suffers woefully to make room for some of the more prevalent Losers…

The worst offender however, is Richie, the loudmouth obscenity spouter. Played by Finn Wolfhard, the Stranger Things star, Richie’s character absorbs a lot of the limelight, delivering some of the finest one-liners in the movie. Though his role within the group is integral, it feels forced at times, and the depth of his character is never really explored to a satisfactory depth, leading to a level of detachment in terms of his actual character. Besides his fear of clowns, Richie feels more like a witty narrator than as a component to the narrative.

For a movie focusing on an entity that embodies fear itself, It is as visually impressive as many high budget movies emerging at the forefront of the box office. Its practical and visual effects operate in conjunction to provide disturbing imagery as well as an overarching ‘off’ feel to the town of Derry, and the child acting is above average.

Notably, Bill Skarsgård’s role is vastly different from Curry’s portrayal in the 1990 version of It. Though Curry had the character as a haunting devil character, he was unmistakably human at times, through the use of his humour and hilarity. Skarsgård conveys the Pennywise as a monstrous demon, swaddled in a perturbingly human farce. The disturbed laughter, devilish smile; his movements, his demeanour, all serve to bolster the sense of underlying threat, and even the build-up to seeing the clown are equally as tense as scenes that actually involve him.

This is a hallmark of excellent pacing and tone within horror movies, and director Andrés Muschietti (Mama) truly shows his mastery of the genre through his use of overarching thematic dread.

Forgetting about the 15 age rating here in the UK, I can wholeheartedly recommend It as one to watch, regardless of whether or not you’re a huge Stephen King fan. In addition, amongst the slough of King’s movie adaptations, this ranks among the more notable, rivalling the 1990 It, Misery and Salem’s Lot.

From writing this review, my search history has become flooded with clown references and tidbits, so I hope you’re all happy that Google will be recommending fancy dress outfits to me for the remainder of the week.

Hope you all enjoyed reading!