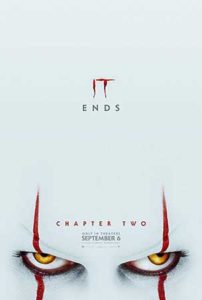 This time two years ago, the world was taken by storm when a second adaptation of Stephen King’s ‘It’ was brought to the big screen with a cast of largely unknown actors, excelling at the box office with critics to such an extent that it became the highest grossest R-rated horror film of all time. Now, during the closing credits, it was revealed that ‘It’ was purely the first chapter, and that we would be receiving a sequel two years down the line which would adapt the other half of the book.

The entire cast has returned for this film, including the same writers, directors and production staff, including Bill Skarsgård, reprising his role as Pennywise. The biggest difference this time is that they had to find adult actors to play the roles of the grown-up versions of the kids. The film takes place twenty-seven years after the events of the first movie, so in this film’s timeline, the story takes place in the year 2016 as the first took place in the year 1989.

An older Mike Hanlon, the only member of the Losers’ Club to stay in Derry Maine, played by Isaiah Mustafa, calls back Bev, Bill, Richie, Ben, Eddie and Stanley, played this time by Jessica Chastain, James McAvoy, Bill Hader, Jay Ryan, James Ransone and Andy Bean. After it becomes clear that Pennywise is still around, and is back to his usual tricks, Bill believes there’s a ritual that can end Pennywise once and for all. But to do this, they have to regain some memories that have been lost to them due to some magic about the town and what happens when you leave it… I don’t know; it’s very poorly explained in the film. All I want to say is that I warned people that this story got stupid as soon as we get to the segment about the adult characters, and I was completely right.

‘It Chapter 2’ does not stick the landing of its promising first entry. My thought process was that if anyone could make it work, it was the team behind the first film, who did a very good job of taking what I thought was a pretty average Stephen King story, with some very questionable decisions, and making it work. But this time, they’ve not quite done their job. The biggest problem with this film is that it’s appallingly paced. While it actually starts out pretty well in terms of how it runs its story, something happens around the middle portion of the film whereby it gets turned up to a 10 in terms of its energy, and never comes down. Good God, this is a film that left me feeling exhausted by the end of it. I needed it to slow down at several occasions and it never bloody did. And if anyone says, “well, the book was like that”, this has been translated to a movie; as a different medium, changes have to be made. I know Gary Dauberman wrote the script, but I feel like Stephen King should really have a script-writing credit. I feel like any time he’s involved in the production of a film, it’s almost to certainly say – don’t make any changes – even though some of his storylines really should require changes.

I have a personal belief that when people talk about most of their favourite Stephen King stories, they’re actually talking about the film adaptations they enjoy, and most of those films were drastically altered from their books. ‘The Shining’ is a prime example of this. I think people who’ve seen the film might be very surprised to find how much it strayed from the book. Well, this is obviously going to create a massive catch-22 for the upcoming ‘Dr Sleep’ adaptation, but we’ll cross that bridge when we come to it. ‘It Chapter 2’ is another prime example of this. In fact, I even feel like Stephen had an influence with Bill’s character, since again, Bill is basically a stand-in for Stephen King character. Oh, and by the way, if you’re playing the Stephen King drinking game, now’s your time to take a shot, because one of the characters is a writer. Oh, and take a shot as well for the story being set in Maine. I won’t give you the rest of the rules for this game, but for the love of God, choose your films carefully if you’re actually going to play it because some of these stories will have you dead before the end of the movie if you’re stupid enough to try it.

Okay, let’s talk about some positives about the film. I actually think the casting of the adult actors is done pretty well. One of the highlights for me was an almost unrecognisable Bill Hader in the role of Richie. The SNL actor has certainly come a long way, and I was surprised at just how much he brought to the role. He definitely feels like a grown-up version of the kid, and if anything, delivers some of the funniest lines in the movie. It was definitely a wise choice on the casting department to choose a comedian for that role. The rest of the adult cast are also actually pretty good, especially the performances of Jessica Chastain and James McAvoy, the biggest names in the production. Of course, that’s not taking away at all from Isaiah Mustafa, Jay Ryan or James Ransone. If you’re wondering why I haven’t talked about Andy Bean, he’s not in much of the film and the reasons will become apparent shortly into the movie.

And of course, there’s more to talk about with Bill Skarsgård’s excellent performance as Pennywise. But I’ve seen a few reviews which point out something that I think is kind of accurate – I think they made Pennywise a little too stereotypically scary. I hate to borrow from Doug Walker (considering what we’ve now learnt about Channel Awesome’s practices over the years), but he does bring up a good point, which is that one of the reasons why Tim Curry was so effective in the role was because they made him look like an actual clown, thereby he could very much be a normal-looking figure in his environment. Whereas, this new Pennywise looks perhaps too much like a horror icon. With that being said, it’s obviously having the desired effect, considering that several parent groups in the UK have tried to ban the posters because it’s scaring kids. Arseholes.

If you thought the young cast in the first film were really good, you’ll be very happy to know that they actually do come back for this movie through several flashback sequences. (Seriously, if you’re playing that game, do not take a shot every time there’s a flashback – you will die!) The young cast are actually once again the best part of the movie, a credit to all of their great performances. It definitely feels like the scriptwriter knows how to write for them a lot more than their adult versions.

My biggest problem with this film though is that it takes so much from the novel, however, despite the fact it has a run-time of nearly 3 whole hours (which, I’d like to point out, is way too long), it somehow also leaves a lot that was explained in the book rather unexplained. Thankfully, they took out the very, very questionable moment that was meant to go into the first movie, but there are several aspects of the story that were foreshadowed in the first film that are never touched upon in the second. Granted, many of those were really dumb and actually created more plot holes than actually explained things. Still, it brings up the point: If you weren’t going to bother putting these in the sequel why the hell bother foreshadowing them the first time?

What’s more, ‘It Chapter 2’ feels like it’s lacking in a personality compared to the first. That’s saying a lot, and is really where my biggest issue lies with the movie. It just feels like a very long film that overstates its welcome, is too loud, too brazen and relies too much on its 80s references. Seriously, there’s a moment directly lifted from John Carpenter’s ‘The Thing’, and they’re not even hiding it. And even a reference to ‘The Shining’! I went to see this film with my colleague, and he actually audibly groaned at that moment. In fact, there were a lot of references in the movie whereby we were audibly groaning. Oh, and by the way, if you’re in the couple that were sat near us, you are way too easily scared. I mean, come on, this movie has a few effective creepy scenes but not nearly as many good ones as the first film had. It’s just a lot of loud, big booms that are more startling than they are scary. But at least this film feels like it has more of sense of humour about itself than the first one did.

‘It Chapter 2’ is a massive let down. What should have been an excellent conclusion to a story which I really wasn’t that much of a fan of the first-time round, descends into an over-long, boring mess. It has its good points; I can’t deny that. The acting is great, and some scenes are really well put together. But as a whole, it leaves a bit to be desired. It needed to better pace itself, and also seemed to be full of the duller moments of the story, which had not been streamlined for this movie. As it stands, I didn’t really enjoy this one.

Well, that’s it for me this week. Join me next week when I’ll be going back to the DC Animated Universe to make up for the fact that I’d gone several months without reviewing it and check out ‘Justice League vs The Fatal Five’. With all that being said, thanks for reading this review. I hope you enjoyed reading it as much as I enjoyed writing it.
Calvin – Nerd Consultant
Share This Post: