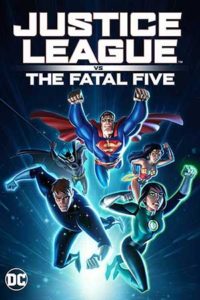 “JUSTICE LEAGUE VS THE FATAL FIVE”

‘Justice League vs The Fatal Five’ was one of those films that came out earlier this year, but I actually failed to capitalise on its opening. I can’t remember exactly what the circumstances were, but this was actually the DC Animated film that came out before the previously reviewed ‘Batman Hush’. In that review, I stated I was considering going back to review it. Well, luckily, I got a slow cinema week, so now’s the time to relook into it.

The weird thing is, ‘Justice League vs The Fatal Five’ is probably the DC Animated film I was the most excited for out of all the four that were announced for this year. Mainly because it was Bruce Timm producing the series, and it was implied to be taking place within the Bruce Timm DC Universe, following on from the Justice League animated series, which is one of my all-time favourite TV shows.     It even has many of the cast members reprising their roles, including Kevin Conroy as Batman, George Newbern as Superman and Susan Eisenberg as Wonder Woman. And, once again, Bruce Timm is teaming up with the Batman: The Animated Series collaborator, Alan Burnett, who has a writing credit on this movie. ‘Justice League vs The Fatal Five’, though, is a very different sort of movie to the ones we’ve come to expect. Sure, Bruce Timm has been producing films for DC Animated Universe for quite a while, and even some that look like they could be set within the original continuity he set up. But this is one of the ones that is the most blatant. There is some difference here and there which don’t fully set it within that continuity, but I will get to that later.     The basic plot is that in the 31st century, the legion of Superheroes is on a mission to stop a group known as the Fatal Five. However, Thomas Kallor (aka Starboy) follows them back, temporarily stopping their plans. As a return to the past, Mister Terrific, played by Kevin Michael Richardson, and Superman, played by George Newbern, accidentally unleash the Five, and, with Starboy’s mind in disarray because of his lack of futuristic medication, they have to quickly figure out what the Fatal Five wants and what they’re up to, with the less-than-coherent super-powerful being as their only source of information.

So, ‘Justice League vs The Fatal Five’ is a very different team to the animated series. Sure, you have Batman, Superman and Wonder Woman, but there’s no Hawk Girl, The Flash, Martian Man Hunter and Green Lantern John Stewart. (Though those two have an equivalence, which I’ll get around to talking about.) Of course, we have Starboy and Mister Terrific, and in place of John Jones, we have Miss Martian, voiced by Danielle Bobadilla. And instead of Green Lantern John Stewart, it’s a relatively new character, Green Lantern Jessica Cruz, played by Diane Guerrero. The inclusion of some of these characters makes some sense – Miss Martian is an interesting choice given her popularity within the Young Justice Animated series, which has recently received a revival, but Jessica Cruz is a bold choice considering how relatively recent she is. She was only introduced about four or five years ago, after an event comic called Forever Evil, and even then, the writers have only really made her come into her own as a character after the 2016 Rebirth of DC.

That being said, I think all of us were really excited to see what Bruce Timm’s team would do with this character, and that’s where the film’s focus fortunately was. Jessica Cruz is the MVP of the movie; she’s a flat-out driving force of everything that happens, and she’s very active within the plot and has an excellent character arc. Her inclusion also ties to one of the main factors that this film has to it, coping with mental health issues. Starboy, for example, can’t control his powers or his mind, due to the fact that he doesn’t have access to what’s essentially futuristic medication, and Jessica Cruz is held back from fully realising her potential in the League after being given the ring due to crippling anxiety. The comics also had her being an agoraphobic character, but the film doesn’t really touch upon that too much for the most part, or at least never outright states it. The film actually handles the topic rather well, although in Starboy’s case, this can be rather stereotypical of that sort of character. The reason why Cruz has worked so well in the comics is the same reason she works so well in this movie; the whole mantra of the Green Lanterns is no longer that they are without fear, it’s that they have the power to overcome great fear, so in a sense, the Green Lanterns are all about courage. Cruz is one of the first Green Lanterns that’s been created to actively embody that spirit almost entirely. It was almost a stroke of genius on DC’s part at a time when they were rather creatively inept. And her character arc is handled brilliantly in this film. Honestly, it is almost her movie starring the Justice League.

The Justice League themselves actually all get some decent time to shine, particularly Miss Martian comes off pretty well, and they handle Mister Terrific pretty well too, considering he’s a character I don’t really care that much for. Batman, Superman and Wonder Woman were always going to be excellent with those three voice actors in the roles. Speaking of which, Elyes Gabel does a pretty good job in the role of Starboy, and Kevin Michael Richardson is good as usual, also reprising his role as Kilowog. Just from me saying that, you’re aware that we’re also going to get tons of DC Easter eggs, including a few Green Lanterns; The Legion of Superheroes obviously are a factor; we even get so call back to Batman: The Animated series, with a fight scene in Arkham, including Bruce Timm in the role of Two Face, who actually does a good impression of Richard Mole’s iconic voice in the role.

In fact, there’s a lot of really excellent voice actors that have very minor roles – Noel Fisher’s in the role of Brainiac Five, and Peter Jessop in the role of Tharok. Tara Strong feels really underutilised, though she does get to play a decent role as Saturn Girl, reprises the role of Harley Quinn, and gives a bit of go of Poison Ivy. One of the strangest ones is Tom Kenny as the voice of Blood Spot as well as Jessica’s Ring. And yes, it is that Tom Kenny, the voice of SpongeBob. My biggest problem with this film though is that it’s such a short movie – it’s 78 minutes in total. And while it’s not telling an amazingly epic story, it does feel like it’s a bit short for its run-time. The villains are the most underutilised in this one. There’s so much focus on the heroes in this movie that it’s at the expense of the villains. Hell, in DC’s case it’s usually the other way around. In this case, 78 minutes is simply not enough time to tell this story; this film could have easily gone on for just 10 minutes longer and it would have made all the difference, and that’s weird, because DC Animated films are usually known to make good use of their shorter running times.

At the end of the day, ‘Justice League vs The Fatal Five’ does have its strong points, but what it’s really lacking in is decent villains, and it doesn’t really have a great climax to it. The final fight is really great, but it ultimately feels a bit one-sided given the context of what’s happening. Also, the film doesn’t really have too much of a final moment, it just kind of stops, which is a real shame because the moments that lead to it are pretty good. In terms of pacing, ‘Justice League vs The Fatal Five’ is actually fairly decent, it just implies a lot that doesn’t get fulfilled upon, or more so just gets a simple conclusion out of nowhere, including the storyline of Batman training Miss Martian as well as a few other plotlines.

In terms of animation, it’s trying to replicate the Justice Animated series and it does a very good job of that. I think people aren’t aware of the Bruce Timm Universe’s rather angular and pointy designs, so the characters might be a bit thrown off, but I think for the most part, it’s excellent nostalgia-bait for people like me who grew up with that version of the DC Universe. And it does an excellent job replicating simple things like the colour schemes. It does obviously break continuity in certain elements considering that it’s rather difficult for this is exist in the continuity of that DC Universe, considering that Justice League: The Animated Series already had a legion of superheroes episode, and this kind of contradicts from any elements of that, including what happened to Supergirl at the end of that episode. But that’s another topic for another day.

‘Justice League vs The Fatal Five’ is not an amazing film, but, as I mentioned, is lovely nostalgia-bait for people who have enjoyed the classic DC animation from the 90s and early 2000s, and assembles an excellent voice cast. But ultimately, it feels like a film which has brilliant protagonists but rather lacking antagonists. The film’s greatest strength is Jessica Cruz, and if it creates more buzz for her character, I’m all for it considering how well she was handled. I didn’t even mention some of the excellent moments in this film to avoid spoilers for a 78-minute movie. If you want a simple nostalgia-fest, this one’s actually better than most of those that are coming out right now, and it does feel like an interesting re-visit. As far as DC Animated films go, this one’s pretty good, just not great. As I mentioned before, the DC Animated films will be returning later this year with a Wonder Woman movie, and I do intend to cover that before the year is over.

And, that’s going to do it for another week for me. Join me next week when I’ll be reviewing what is set to be potentially the final Rambo movie, ‘Rambo: Last Blood.’ With all that being said, thanks for reading this review. I hope you enjoyed reading it as much as I enjoyed writing it.
Calvin – Nerd Consultant
Share This Post: