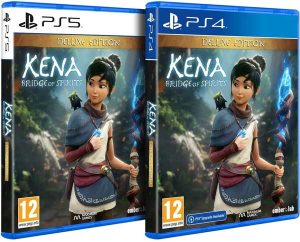 Kena Bridge of Spirits is the first game from Studio Ember Lab and is the last major PlayStation exclusive for 2021 with Horizon Forbidden West being pushed back to February. The game was first shown last year at the PlayStation 5 reveal presentation, and since then the art style alone got many people like myself intrigued and it looked like it would be a big part of PlayStation’s 2021. This is an action/adventure game about a Sprit guide named Kena, attempting to restore a land she has travelled to from the infection that has spread across it. She is joined by many cute creatures called The Rot, which give her access to several abilities to purify the land and lead the various Spirits she comes across, to rest. The game has a world to explore with a central village hub and 3 areas you unlock over time with a few collectables, such as new hats for The Rot, as well as extra rot to upgrade abilities.

Kena Bridge of Spirts is a good game that I enjoyed playing but there’s far too many niggles for me to say it’s great. It has great graphics that bring to life a beautiful world and soundtrack that’s great and all of it is especially good for first time creators but is bogged down by a combat system that works fine but needed a bit more time to work out the kinks. There are other issues like the camera being a bit of a bother, and the terrible healing system but as it stands, it’s a fine short experience that you will probably get something out of but won’t be something you’ll come back to even with an easy mode that is essentially a ‘win’ button.

If you are looking to pick up a PlayStation exclusive this one is fine but there’s a few better right now to hold you over until Horizon in February. I would recommend if you’re up for a shorter experience that’s a bit cheaper though pick it up and get the deluxe version if you’re still on PS4, since it comes with the PS5 version when upgrading.
Calvin
Nerd Consultant
Share This Post: