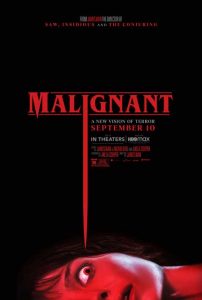 Malignant is the latest horror film from director James Wan, one of the masterminds behind Saw and The Conjuring films, and this is his first film back as a director since Aquaman. Now, when it comes to my opinion on James Wan, as much as I am a fan of the Saw films—for my own weird reasons that I still can’t figure out because the more I analyse those films, they worse they seem to get—, I’ve always thought of James Wan as more of a good ideas man who is not great at executing those ideas. For example, The Conjuring films are great on paper but they don’t turn out too well in practice, especially since he’s been trying to turn it into an extended universe.

So, what is Malignant? Well, Malignant is a bit of a hard film to go into since you don’t want to give away too much, but let’s just say that it hasn’t really been marketed very well. The trailers imply that you’re getting a much different film than the one you’re actually getting. It’s mainly surrounding a woman named Madison who’s been abused by her husband and had a series of miscarriages, and then one day her husband is murdered and it spirals into a series of murders of various people that have a connection to a past event. Maddie can now see the murders through visions, believing that they’re being committed by her old imaginary friend Gabriel. Now, when you go into this thing you think it’s going to be a simple, typical poltergeist-type film, but as it goes on it actually goes in very different directions. The film’s actually kind of a mystery: what Maddie and Gabriel’s connection is; what the past event that’s connecting all these murders is exactly; and, of course, there is a plot twist down the line.

Now, I’m going to be fair on this one—some of these ideas are actually very good. I genuinely think James Wan and his co-writers had some excellent ideas when putting this together, but man does the execution not quite pull it off. The biggest problem I had with this film is that it can’t decide what kind of horror it wants to be. At one moment it’s a very paranormal horror and you can certainly believe there’s some sort of paranormal element, but then it decides it wants to contradict itself part of the time and decides to be a more grounded horror film. The plot twist later also raises further questions about just how paranormal everything is, and not in a good way. It’s one of those twists where it’s quite good when you first see it but then the more you think about it, it actually raises more questions than it answers, and that’s one of the worst kinds of twists. James Wan definitely does not have an original twist in this case; nothing in this film I would say is very original.

And without giving too much away, I’ll put it like this: if Karl Pilkington was a script writer on this, I would have believed it because some of these do feel like ideas that he would come up with. There are a lot of moments in this film where it really wants to spell out the twist, and I think even James Wan kind of knew that once we get to that point, there’s not much left for the film to do. So his solution to this is to have the film go completely off the rails in the final segments. This had to have one of the most insane final sequences of a horror I’ve ever seen. At times I genuinely thought James Wan had mixed up scripts from multiple films because a lot of it didn’t feel like it belonged in a horror film, but not to the film’s detriment; it actually really feels like the second half picks up after the first half which is actually rather dull.

Madison is a decent lead character on paper but they also can’t really nail down a personality for her. She does a very good job acting out some of her early scenes but James Wan doesn’t really know how to characterize her afterwards. There’s a lot to do with the relationship with her sister Sydney and her working with the police investigation looking into the murders, in a competition of ‘How Can I Incriminate Myself As Much As Humanly Possible?’ When we get brief glimpses of Gabriel, I do like the design they go with up and to a point; once we get even more of a view of what Gabriel’s like, the design falls down considerably and goes from looking creepy to looking ridiculous. Again, it further ties into the question of whether we’re having a paranormal or a grounded horror film? Because it feels like it wants to do both though it can’t really have it both ways.

It also doesn’t help that the acting isn’t that great, but I don’t think that’s down much to the actors, rather the poor script—the dialogue is horrendous. Dialogue has never been a strength in James Wan films and Malignant is a prime example of that; this is really where it falls down. And as a result, what could have been a great performance by the actors feels rather off kilter most of the time. Also, this film really loves lightning effects, to such an extent it overuses them to an absurd degree. I don’t care how bad global warming has gotten, there are not that many lightning storms in the Washington area! Oh yeah, this film takes place in Seattle, I should have mentioned that.

If you’re going to watch Malignant, my advice would be to not watch the trailer—it convinces you you’re getting a different film from the one you actually get. Other than that, the best thing I can say about this is the fact that it completely loses itself is actually its only saving grace. Malignant would have been a boring, forgettable horror film if it hadn’t been for its insane second half. Do I recommend it? No. Malignant has some interesting ideas for a horror, and if someone tried to do something like this again they might actually be able to pull it off. Without giving too much away, I’m not saying that going into these ideas is an automatic failure, it’s just not been executed brilliantly here. The film goes from feeling wooden to being over-the-top, and really suffers from the phenomenon of horror movie characters being incredibly stupid in the face of danger. But, as a whole, I’m going to say I think the film is passable at best and, at worst, pretty boring.
Calvin – Nerd Consultant
Share This Post: