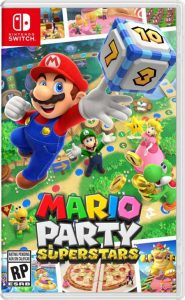 Mario Party Superstars is the latest entry in the series and is meant to act as a celebration of the spin off series up to this point. For those who don’t know, Mario Party games are virtual board games where following each set of turns, the players compete in mini games with the goal being to have the most stars at the end. Each board has different rules on how to acquire the stars, but usually this revolves around going past the Todette space and using the coins you won from the mini games, to pay for a star (costs 20 coins). The game is advertised to be a massive throwback to the series roots with updated versions of 5 boards from the Nintendo 64 trilogy of games (Peach’s Birthday cake, Space land, Woody Woods and Horror Land), as well as Minigames from throughout the series. The game also took note of something that previous game Super Mario Party was lacking by having Online multiplayer available from the start. With all that goodwill put in place, has this been the game to break the recent curse, and brought us a Mario Party that feels like the games of old?

Mario Party Superstars is the Mario Party I’ve wanted to play for years and is one of my favourite multiplayer experiences this year. The gameboards and minigames are great, the online multiplayer when it works is fantastic and it feels like a lot of effort has gone into addressing issues of past games. The only complaints I have are with the quality of the A.I. and I wish the net coding on the online was better, but given the way Nintendo’s online multiplayer structure works I might be screaming at a wall with that complaint. I have heard a complaint that there’s too many lucky spaces but while I think that’s kind of true, I wouldn’t say it grossly impacted any games. If you have a group of friends and you want a break from Mario Kart and Smash Bros, this is your next great multiplayer experience.

This is a great multiplayer experience though unless you have friends that have the game, or you have a lot of controllers and your mates are likely to come over, you might not get the most out of it unless your very happy playing with random people online. On that basis, I would say maybe agree to buy the game at same time as a couple of your friends because this game is best enjoyed with good company.