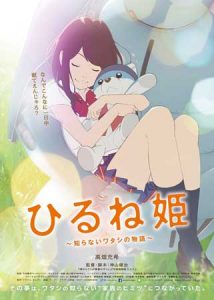 Anime as a medium of storytelling has long held the adulation of many audiences across the world, not only for its unique visual style, but also for its ability to create enchanting worlds through the use of 2D animation.

In particular, the work of large studios like Ghibli and Production I.G. has served to bring large budget anime movies to the forefront of media attention with celebrated titles as Spirited Away, My Neighbour Totoro, Grave of the Fireflies, and Ghost in the Shell.

With such heavyweight productions heading the medium, anime in recent years continues to appear at the forefront of a lot of reviewer’s movie lists (less so in the West, but its resurgence has caused a great deal of stir lately, such as with the release of Your Name in 2016).

Napping Princess (or Ancien and the Magic Tablet) is a fantasy anime film produced by Signal.MD a studio not known for many popular series as of yet but nonetheless are on the up and up.

The focus of the film is split in between two worlds, so to speak:

One; the real world where Kokone ,the pre-university teen, lives alone with her father who runs a car repair shop.
And two; the steampunk fantasy realm referred to as Heartland where Ancien, a sorcerous princess is isolated in a tower to prevent her magic from running rampant, or so we are told.

The two settings and the events that occur within them run concurrent to one another – where one thing happens in the real world, a parallel is drawn in the world of Ancien.

Beginning in Heartland, the scene is set as Ancient narrates to us the circumstances in which she is kept. Alone in her tower, she describes her ability, the power to give life to objects through the use of a tablet (basically like an iPad), beginning with her treasured stuffed animal, Joy. She is later shown to animate a trike, transforming it into a humanoid vehicle (Michael Bay, eat your heart out).

Ancien’s power is met by scrutiny by many of the king’s followers, resulting in the confiscation of the tablet and her incarceration within her tower; this does not stop the rebellious princess, as she skilfully escapes to reclaim the tablet. The king’s advisor is soon wise to her attempts and puts measures in place to prevent the tablet’s recapture.

Meanwhile in the real world, Kokone awakens. Drearily glancing around her room she prepares herself for school, making breakfast for her despondent father before leaving the house as he broods over a cracked tablet.

Kokone visits her mother’s grave after school, finding her stuffed toy at the grave within which is stored the tablet, and upon returning home discovers several unknown men looking for it.

I won’t talk further about the story for fear of the dreaded śpøîłęr tërrītõrÿ but the plot follows Kokone on an adventure across Japan, evading the capture of a mysterious group bent on recovering the tablet; but as she progresses on her journey Kokone discovers its true significance, and that of Heartland and Ancien.

Napping Princess does several things incredibly well. The two parallel settings allow for reprieve and plot progression in lull moments, particularly when uncertainty overwhelms the protagonist, but the writing translates especially well between Heartland and the real world.

As an audience we are left to interpret what does and doesn’t make sense within the constraints of the dual narratives, meaning the writers were smart enough to assume that the audience is at least capable of following a storyline (something that Western blockbusters seem to have to spell out in the form of a big reveal).

However while this method of storytelling is effective, at times it can become confusing. Characters ‘travel’ at times between Heartland and the real world, and it is rather abrupt at times. While an explanation is offered, it occasionally feels lacking.

What this duality does cater for is a colossal change in visual style. The mundane real world is complemented breathtakingly by a vivid and enchanting animation style, where we see unbelievable technology and feats; bravery and stunning magic. The nature of this caters toward all audiences in terms of content in that it provides beautiful imagery in contrast to an otherwise dry set of circumstances, and transports us to the medium that anime performs best in – one that shows just us how far from reality it can take us through what is effectively a cartoon.

Praise for the medium aside, what I think Napping Princess does well is give us an escape from an otherwise ‘usual’ story through the provision of an alternative reality, where dreams are reality and the impossible is possible.

Though the visual style and dual narratives are inventive and unique, the movie lacks in some departments.

I know about two seconds ago I was praising Napping Princess for transporting us across worlds, in terms of actual animation quality it is somewhat lacking. I mentioned earlier titles such as Spirited Away and Ghost in the Shell. Next to large budget classics like those, the film fails to perform. Still frames and a lack of flow are occasionally noticeable, and for a film released in 2017 (with such hot competition from films like Your Name, released in 2016 and showed none of the same animation issues), this makes obvious the fact that it had a smaller budget. While budget is not a point for criticism, the movie clearly shirked consistent animation in favour of having some scenes better animated than others. It was an issue to me, as I’m sure it would be for other lovers of anime.

In terms of its story, there are elements that could certainly do with improvement. I mentioned before the confusion caused by the jumps between the worlds, and the characters within them, there are several moments (particularly toward the end) where this actually gets in the way of weaving an engrossing story (obviously I won’t talk about them because again, śpòįlërs).

It is sad to have to say it, but though this movie had excellent potential, its failure to deliver on several fronts is what leaves it unable to fully realise its potential.

All in all, if you’re a fan of anime and enjoy the fantasy steampunk style of setting, I would recommend this film, though there are movies that better represent this that are more well known (see Howl’s Moving Castle).