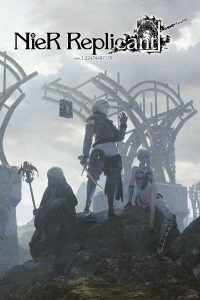 (Whoever decided on this title, thanks for making my job harder.)

While Nier may be a bit more well known today, after the success of Nier Automata, both the series as well as it’s creator Yoko Taro have been very unknown for quite some time. The original game didn’t end up selling too well overall, only selling around 700,000 copies to date and also led to the closure of its development studio Cavia. Despite that though, the game still got a cult following and received acclaim for its great characters, story and soundtrack.

As it turns out, there were actually two versions of Nier, there was Nier Gestalt, which was the version that got a worldwide release, and then there’s Nier Replicant, which only got a Japan release. Both games were mostly the same, with the main differences being the main character’s appearance and his relationship with a character named Yonah. As mentioned, Nier Replicant never got an official worldwide release, until recently when we finally got a remake of the game with Nier Replicant ver.122474487139… on the 23rd April 2021 for Xbox One, Playstation 4 and Steam.

In Nier Replicant ver.122474487139… you take on the role of Nier (in truth you’re able to name him but most people just call him Nier), taking care of his sister Yonah who suffers with a deadly disease called the Black Scrawl. One day Yonah learns of a tale of a flower called the Lunar Tear and ventures out to find it. When Nier finds Yonah within a place called the Lost Shrine, he comes upon an ancient tome who calls himself Grimoire Weiss, a book that contains magic powers that our protagonist is able to wield. He learns from his village chiefs Popola and Devola that Grimoire Weiss, with the power of pages called the Sealed Verses, may be able to cure Yonah of the Black Scrawl. And thus they set off in search of the Sealed Verses and a mysterious being named Grimoire Noir.

As to be expected, the game is a massive improvement presentation wise compared to the original. From the character designs, to the colouring and lighting, the visuals have had a major facelift and look so much better when compared to their original counterpart. The game carries the same soundtrack as the original, with a few more songs added in, and it’s just as haunting and epic as it always has been. Each song perfectly accompanies the situation, heightening the tensity and the emotion that the moments, whether gameplay or storywise, bring with them. The characters also deserve some major praise, all of them are seriously well written and are casted perfectly, with actors like Liam O’Brien as Grimoire Weiss and Laura Bailey as Kainé really helping in heighten the characters personality and mannerisms.

The game plays in the style of a hack and slash RPG, where you explore an overworld completing tasks and killing enemies named Shades all the while. The combat of the game isn’t too complicated as there aren’t any button combos and most of it revolves around mashing and holding buttons. You have two strings of attacks that can be performed by pressing the X/Square button and the Y/Triangle button. At any time during the combos you can hold down the button and release a more powerful attack. At the start of the game you only have access to a single type of weapon, a one-handed weapon, though as you progress in the game you’ll eventually be able to wield two-handed weapons and spears. While I personally prefer the spears to the others, I still found myself swapping out weapons very often for different groups of enemies. At aid in combat you also have the magic powers provided by Grimoire Weiss, which will let you perform powerful attacks both at a distance and up close. You’re only given a few of these powers at the start, though you quickly learn them as you progress through the game. While you can only equip a maximum of four spells at a time, you’re able to change them whenever needed just by going into the menu; and you’ll quickly find your favourites. Personally I found myself favouring the Dark Hand, Dark Spear and Dark Gluttony. When a Shade dies there’s a chance that they’ll drop what’s called a word, when they do you’ll gain extra benefits like an increase in strength, magic power or allowing you to gain slightly more exp. While the combat can get tedious at times, the flashy animations and the switching of magic and weapons will keep you engaged.

Just like in all other JRPG’s, as well as your main quest you’ll also be able to perform a number of side quests for the locals within your village. In doing so you’ll be able to receive more money to buy healing items and more weapons for your arsenal. That being said however, unlike in most games like this where you’ll have to pry me away from the side content to actually finish the main story, I rarely ever found myself completing any of the side quests. Most of them are nothing more than fetch quests that give you pretty much no direction as to where you have to go for the items, meaning that you have practically no choice but to use a guide. Plus, you can just get money from selling materials that enemies drop anyway, so there’s not too much point in completing side quests.

Another slight gripe I have with the game is that, for me at least, the jump in the normal and hard difficulty options are way too steep. I played most of the game in hard mode (I’m a masochist okay) and I found myself dying a ton and was consistently getting frustrated, as moments that would probably be somewhat of a challenge normally felt increasingly unfair and it felt like I was surviving them by sheer luck alone. It was around the 15 hour mark that I finally bit the bullet and decided to try on normal difficulty and I ran into the opposite problem. The game all of the sudden became way too easy and I didn’t die once, suddenly all the tension I would normally have felt simple vanished. While I did still have a good amount of fun in normal difficulty, I do wish that there was a bit more challenge to it.

The biggest problem that I had with the game though was the camera and lock-on system. The camera is absolutely atrocious, wherever you run it’ll always stay stationary and won’t follow where you run, meaning that if you want to be able to see where you’re going you’ll have to turn the camera manually, what’s worse is that there’s no option in the menu to change it at automatic. It becomes incredibly annoying very quickly and the frustration only increases as you keep playing. It’s especially annoying since Nier Automata does have an automatic camera (I mean, it’s not a good once but it’s still there) so there’s no excuse for this game not to. Then there’s the lock-on system, the game will automatically lock-on to the nearest enemy and have all your attacks focus on it, manually locking on to an enemy just keeps it on screen. While this isn’t too annoying in a battle against a horde of smaller enemies, it becomes really annoying when you want to focus on one enemy in particular and the game locks you on to one of the smaller guys, especially in boss fights. Even then, if you manually lock on to a certain enemy, all the game does is keep the enemy on screen and not have your attack centre on it, at times it doesn’t even put the enemy in centre focus.

Despite all these problems however, I still kept going as there were still some really epic moments and awesome fights that made me ignore the problems and also because I was so attached to the characters and so in love with the story that I felt it was necessary to see it through to the end.

I’ll happily be the first to say that Nier Replicant ver.122474487139… is far from perfect, there were plenty of times where I got super frustrated with the game and even got a little bit tempted to stop playing like I did with Oddworld: Soulstorm (just wait till that review), it even led to this review sounding like one huge rant. Despite that though, this game did eventually win me over and I fully acknowledge that I did have a lot of fun with it and I’ll definitely be coming back to it to get those other endings at some point. Personally I would definitely recommend Nier Automata over this game for anyone new to the series, but I’m still sure that if you give this game a go that you’ll have a good time with it. It’s not an amazing game, but it’s far from terrible.