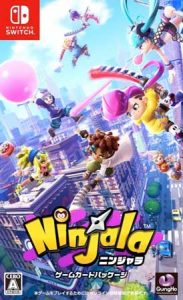 This is a free online multiplayer battle royal game for the Switch that pits 8 players as cartoony Ninja’s battling against each over on a map for a set time to see who can get the highest score for knocking their opponents out. This game arrives at an interesting time on the switch since it’s on a platform that has both Fortnite and Splatoon 2, the latter of which Ninjala has been compared to quite a bit from and aesthetic point of view since both have rather cartoony designs.

Personally I was intrigued by Ninjala when I saw it during the Nntendo Direct at E3 2018 and again in the Nintendo Direct Mini in March but i wondered if it would be fun and challenging enough to compete with Splatoon 2 which takes up majority of my online multiplayer time on the switch. the games developers were also being very coy about the in game spending, there obviously would be some given the base game would be free but just how the micro transactions would work was not revealed prior to release. It also got a delay but received an open beta test on what would’ve been it’s first weekend which was a good taste of what to expect in the game but now that it’s here the big question isn’t should you buy it since it’s free but is it worth investing your time in. well unlike many of the aforementioned games this one has a focus more on Mele weapons rather than ranged weapons which does a good job to separate it from other battle royal games. It also has a larger focus on very large environments with multiple floors and a verity of locations. In that sense it is more ambitious than a game like Splatoon 2 in terms of map design though I feel Splatoon 2 maps were slightly better implemented for it’s gameplay compared to Ninjala.

I had fun with Ninjala. It was really cool and really engaging and will likely get better with updates. However with my online multiplayer time I think I’ll be sticking more with Splatoon 2 and Smash Bros. it’s not that I thought this game was bad, far from it it’s a really good game, but I personally get a bit more fun out of those. However I will not say i don’t recommend trying it I really do I just recommend Splatoon 2 more since it’s gameplay is slightly more accessible and it has way more content without microtransactions though I had more fun with this than Fortnite

It’s free so you might as well give it a go to see if it’s your sort of thing if you have free time though my personal opinions is if you’re not huge about it but want a good online multiplayer game on your Switch go for Splatoon 2
Calvin – Nerd Consultant
Share This Post: