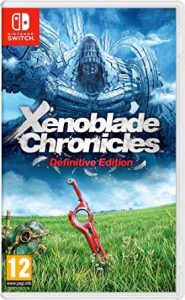 Xenoblade Chronicles gets it’s third release after previously appearing on the Nintendo Wii and 3DS. It seemed an interesting idea to rerelease Xenoblade again on the Switch given that it’s an old game with a cult following which meant it was primed for another release, especially given no console it’s appeared on has really been able to match the graphical capabilities of the developers ambition and lift this game from a cult following to a more large scale audience.

Xenoblabe has also become Nintendo’s premier RPG franchise after 3 successful games and an a particular boost from main character Shulk’s appearance in the last 2 Super Smash Bros games, with the most of the other major releases in genre on their platforms coming from third party developers so it seems like the time might be right to have the franchise celebrate it’s legacy now that Nintendo has it’s most successful console since the Wii riding high. The thing is Nintendo already had the Xenoblade Chronicles 2 on the switch within the consoles first year of the consoles life and it’s major DLC release within a year of that game coming out so it seems premature to release legacy content and I’m not sure that it’s reveal during the September Nintendo Direct last year had the impact Nintendo were hoping for if you saw any reaction videos to that direct. Put it this way the people who seemed the most excited for this in my group of friends were the ones who had played the previous releases and were desperate for a HD release. Xenobalde Chronicles has a story centring around the mythology of a war between two titans that created a land mass that is now inhabited by organic races including humans and the mechanical Mechon who are constantly in conflict with them. The greatest weapon humanity has is a sword called the Manado which a mechanic from Colony 9 named Shulk during a Mechon attack on his home town discovers he can use Mando and has the power to see close into the future. after the disaster he travels to find and destroy the new Faced Mechon that orchestrated the attack. That’s really not doing the whole story justice and it really is something you have to experience for yourself. On top of that there is an extra story which acts as an epilogue and is available from the start if you’ve played the original and just want to jump straight to it and adds 13 hours on to what was already an over 200 hour game to 100% though is 47 hours for just the main story (source: Howlongtobeat.com). so you’re getting a long game with tons of extra content and updated graphics and gameplay which does hold up but outside of the graphics and extra story not much has actually changed so think of this more like Persona 5 Royal then Trial of Mana Remake.

Sorry this review took so long to come out but I really wanted to make sure I did this game justice. As it stands I will say definitive edition is the right word because it truly feels like this is the game the devlopers wanted to make from thestart fully realised. The gameplay still takes getting used to but is incredibly strategic and I think this version does a better job explaining it and I think the presentation works. It also has a ton of content, I bought it on release day on 29th May and finished the main and extra story 29th June and hadn’t even come close to 100% the game. It’s not going to be for everyone and I think it’ll appeal mostly to RPG fans but if you like good stories with rich mythologies give it a go

I would recommend if you are at all curious this is the version to get over either the original on the Wii or the Re release on 3DS. It’s currently £40 but expect a price cut around the end of the year
Calvin – Nerd Consultant
Share This Post: