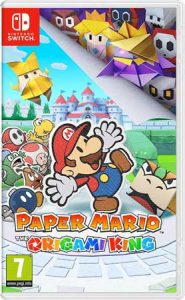 After asking for ages Paper Mario finally gets a switch game and from the look of the trailers set off to relive some of the glory of the franchise that got lost with Colour Splash on the Wii U and especially with Sticker Star on the 3DS. The big gimmick this time is the Origami aesthetic mixing with traditional Paper Mario, the storyline being that Ollie the Origami King has taken over Peaches Castle and the Mushroom Kingdom turning into Origami and Mario must travel with new companions including Olly’s sister Olivia to save the kingdom by defeating the bosses at the end of each unfurled ribbon surrounding the castle. If you’re used to Paper Mario you know there’s going to be a bit more to it to discover some of which was detailed in the closer look video on YouTube which was obviously meant for the now abandoned E3. The other big changes were a ring battle system which looked like it would be more similar to games like Paper Mario Thousand Year Door whilst it also creates a puzzle of lining up enemies for maximum effect in attacks and an new experience system which didn’t seem to match what you’d expect from a traditional RPG which had people worried prior to release. Paper Mario’s battle system is now has a slide puzzle element to the tradition battle system and coins play a bigger role overall with them being used to pay for extra time or getting the toads in the audience to aid you in battle and give you hints. It’s also not the longest game in the series it comes in at a total run time for just the main story at around 26 hours and 37 hours for the competionist. Now granted in neither category it’s not the shortest game in the series but does come in on the lower end, especially when Compared with Thousand Year Door on the Gamecube having a competionist time of around 65 hours (source: Howlongtobeat.com). to it’s credit despite the changes it’s not entirely unrecognisable from traditional Paper Mario and veterans will be able to jump in fine and it works well for newcomers also though the battle system is way more accommodating to the latter given how different it is.

I preferred this Paper Mario to Sticker Star and Colour Splash and in many ways I preferred it to Super Paper Mario. It obviously not as good as Thousand Year Door but no one was really going into this game thinking that. it really in many ways has the Paper Mario charm with the story, characters and dialogue, some amazing environments to explore and have fun with as well some awesome collectables and set pieces. This was genuinely enjoyable experience in spite of my rather mixed opinion on the battle system and the rather bare RPG mechanics. If they fixed many of the issues with those we could have another paper Mario close to Thousand Year Door. Still I actually really liked this game though and am glad I played it. still would love a port of Thousand Year Door but given how Nintendo has handled legacy content lately I would doubt that’ll happen

I would recommend though temper expectations if you’re a long time Paper Mario fan and get it at any time if you’re at all curious since the physical copy will never go on sale so the best way to get a discount if you’re unsure is to get it second hand or digitally in an E shop sale if Nintendo feels like having one with their first party games. I would suggest buying this though if you have a Switch given that the Switch release schedule at this time is baron at this time and is even worse if you take out Third party releases.
Calvin – Nerd Consultant
Share This Post: