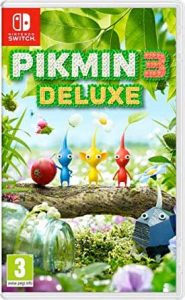 Pikmin 3 finally makes it to the Switch from the Wii U making it one of the last great games on that system to make the jump to the Switch with added content. The game was announced in August via Nintendo’s Twitter account with a weird considering the nature theme of the game October 30th release slot which likely was made to fill the slot of another game due to a possible delay of Super Mario 3D World switch port moving to Febuary (note: this is largely speculated Nintendo insiders and Nintendo has not confirmed this is the case). The main additions that were announced for the game were that the game would contain an prologue and epilogue missions involving fan favourite characters Olimar and Louie, extra difficulty levels, as well as 2 player co-op. in case you haven’t played Pikmin before here’s what the basic premise is it’s an real time strategy game where you play in a small version of out world using little creatures called Pikmin to survive, find resources and battle bigger creatures with different types of Pikmin being more useful or required to certain sections and puzzles. In Pikmin 3 you play as new characters Alph, Brittney and Charlie traveling to planet to get fruit to sustain their planet’s growing hunger problems however their ship runs into a problem which requires them to also get a key that previous main character Olimar has somewhere on the planet using the pikimin to help get fruit and get off the planet. The game makes you balance exploring environments to gain extra fruit to boost your score but at the cost that the crew needs to eat some of that fruit to survive so to get the best score by the end of the game you need to get a lot of fruit in as short a number of days as possible, though I would recommend exploring all the areas since trying to do the game very fast actually makes the game way too short. Now I will be honest and say that I never played the Wii U version of the game so my perspective is someone playing Pikmin 3 for the first time though I will be commenting on how many people have perceived the changes from the Wii U version.

If you weren’t a fan of Pikmin this one won’t change your mind since it’s more of the same but with a few extra refinements. I really liked it but I would say I still would like a Pikmin game that’s a little longer and the lack of an online co-op is really disappointing. As a whole however it is genuinely enjoyable to play and explore these environments and it really is a great to have awesome co-op experience which on the switch with its automatic multiplayer thanks to the 2 joycons on each system is a real boost. With all the dlc from the Wii U version and new content it is worth buying again if you owned one because there is a new experience here and the ultra spicy difficulty will give you a challenge if you want it. If you didn’t play the Wii U version I am proof you can just play it and enjoy it and it can function as someone’s first Pikmin game if you saw Olimar in Super Smash Bros and want to know what he’s about though I would recommend checking out some videos about the first 2 games first

Would recommend buying this game though look out for some good deals too around it since there are other switch games out that should probably take priority purchase wise right now.
Calvin – Nerd Consultant
Share This Post: