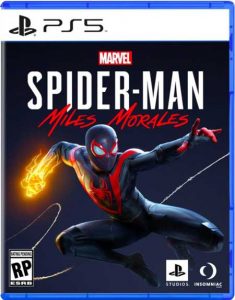 Spider-Man is back to launch the PlayStation 5 with this spin off game that’ll show off the capabilities of the console. This time we’re in control of Mile Morales just ahead of him getting his powers at the end of the last game and deals with Miles dealing with a clash in Harlem that’s pitting an underground Terror cell lead by new villain The Tinkerer and the Roxcon corporation who are building a new energy source. If you played Spider-Man PS4 you know exactly what you’re getting. It’s the same open world Manhattan map, the same controls, the same combat and similar mission types with some slight changes to suit the new character with some of his specific powers like Venom and Invisibility which will be familiar to anyone who saw the movie “Into the Spider-Verse”. The game’s special edition also includes a remastered version of PS4 Spider-Man which I’m not sure is entirely necessary but you get some benefits.

Like it’s predecessor Spider-Man Miles Morales is an excellent game and a great showcase of the PlayStation 5 which made owning the console at launch really worth it. the story is great, the combat is improved, the stealth missions which were my favourite part of the last game are even better and it just looks great and makes you feel like Spider-Man. The real complaints that hold it back is the lesser amount of content and the bugs which make playing the game rather nervous right now but when it gets even more patches this will be an excellent edition to the Spider-Man cannon that PlayStation is building which could really rival the Batman Arkham series when we look back on these games.

I would actually recommend holding off on PS5 version for a couple more months to sort out the bugs in the game but you should buy it down the line if you liked the first game on either PlayStation 4 or 5. The PS4 version hasn’t has as many issues so if you’re waiting a while on a PS5 and take advantage of the upgrade when you get the PS5
Calvin – Nerd Consultant
Share This Post: