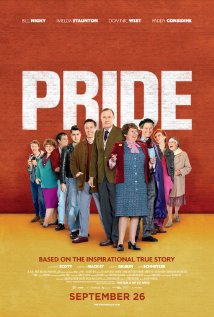 When I started the Axia Film Society I knew I was going to end up seeing a lot of films that I wouldn’t normally see. Pride definitely fits that category, although in a sense it doesn’t. I wouldn’t not see this movie, I just probably wouldn’t have gone to the cinema to see it, I would have waited for it to come out on DVD or seen it on Sky movies. This film is the reason I’m quite glad I started the film society because this film was worth going to the cinema for. Films like this are the reason why you’ll never see anyone bashing the British Film Industry.

Pride gives a very interesting look into both Gay Rights and the Miners Strike, although neither one is an overriding theme, this film’s main focus is the fact of prejudice itself and how it affects people. The plot ties in both of the struggles brilliantly. The plot itself centres around the political activist group known as Lesbians and Gays Support The Miners, and they resolve to raise money for the miners strike, believing that the way the police were treating the miners was exactly the same way the police were treating them.

Now the film is based on true life events, but I must be honest, I didn’t actually take time to really research this before going in to see the film. But I don’t think a film based on true life events should force you to do an incredible amount of research, you should just learn the basic gist. I think a good film based on true life should make you want to go and look up the books and the historical documents about the moment itself. Similar to how a comic movie should make you want to go and read the comics that the film is based on. In that case Pride definitely does that, it portrays the people of this historic event as extraordinary human beings that you only want to learn more about.

As the events are portrayed in the film, there are some issues in the sense that the plot kind of starts pretty slow and doesn’t feel very cinematic, in a sense, it feels more like a three part drama that was made specifically for Channel 4, but later on it definitely feels cinematic and does warrant it being a film release.

The writers also really took the time out to make sure that despite the fact that there are lots and lots of characters you get to know each one of them really well and you see their progression really well. I can’t think of any character in this film that I didn’t feel I knew more about by the end and didn’t feel that there was some sort of advancement in some sense, which considering some of the films that have been written these days, that is saying a lot!

This film had an all star cast, well not all star in the sense of movies, most of these are mainly well known for television roles, with the exception of Bill Nighy and Dominic West who have done quite a few films. Highlights include the aforementioned Bill Nighy and Dominic West, but we also have Andrew Scott, famous for playing Moriarty in BBC’s Sherlock, Joseph Gilgun who most people recognise from the Channel 4 drama Misfits, Paddy Considine and George McKay. Every actor does a brilliant job.

But for me the really stand out performance came from Imelda Staunton playing one of the main members of the miners support committee. She does a brilliant job as the woman trying to keep the miners happy whilst sticking up for the Lesbians and Gays Supporting The Miners group. For me she really should be up for Best Supporting Actress at the BAFTA’s. Andrew Scott also does an amazing job in his role, although I feel that he could have had a bit more screen time. Again I believe he definitely should be up for Best Supporting Actor, along with George McKay, who does a brilliant job playing the role of the closeted gay member of the group afraid to be discovered by his parents.

If any actors weren’t mentioned its purely because I don’t have enough time to mention all of them, but everyone did at least a fairly decent job if not giving one of the performances of their career. Whilst I am at it, I was expecting Bill Nighy to blow me away, and he didn’t completely, as I felt sometimes his performance was a bit too stilted, especially towards the beginning, he definitely by the end became a stand out member of the cast. Since he’s the most likely to be nominated for Best Actor in a leading role, despite the fact that he pretty much isn’t the leading actor of this film, I would not reject him winning that category at the BAFTA’s next year. I say BAFTA’s because I don’t believe this film will get nominated for an Oscar.

From the way the streets are set to the costume department, everything is done to exceptional detail. The film soundtrack also stood out for me as well, it will definitely be recognisable to anyone who spent a large amount of time in the gay disco scene in the 1980’s. It also had some brilliant dance choreography of any film I have seen this year on behalf of Dominic West. I never really want to comment of this sort of thing because I’m REALLY not a dance fan, but he definitely made it believable that he was a completely different character to any other role he had been in and made his character warm to the audience.

Do I have some negatives on this film? Well not as much as I would have thought, considering I can seem to find a negative in almost any film I watch! (Honestly this feels really forced) As I said before it does kind of start out slow and get better as the movie goes on, but I would hardly call that much of a negative. I also would have preferred it if a couple of the homophobic characters had changed towards the end of the film. A couple of them have a story arc but they are never sort of addressed again, especially the main homophobic character who really doesn’t change at all by the end of the movie in any positive sense, but I do understand that this is based on true events, so you are kind of limited in your options.

I also think that this film is too long in a sense. That may be weird seeing as I complained that Lucy was a bit too short, but I do think that there were a couple of scenes that could have been cut to save a bit of time. This film is the longest film that I have reviewed for the site so far, it runs just over the time Guardians of the Galaxy did. It’s just over two hours, but having said that, it’s still better than a couple of the longer films I have watched this year which definitely went on too long. In one case for example Twelve Years a Slave, which definitely should have been shorter than it was.

To summarise, this has actually been one of the best films I have seen all year, because I just can’t find that many negatives to look at. Considering a lot of the films that have come out this year, that is saying a lot. I really would expect this to turn up on my Top 10 best films of the year list, which as I mentioned, will likely be published at the end of the year, if not, the beginning of next year.

The film addresses prejudice in a “and then they came for me” attitude of “if we don’t stick up for them, then they wont stick up for us ideal”. At the same time it’s not about the miners or gay rights as is mentioned in the advertising campaign, it’s just about prejudice in general and how if we don’t support one another it’s not going to help anything. This is really great as a film for anyone who has felt downtrodden or like they are part of a group who is misunderstood.

I would definitely recommend anyone to go and see this in the Cinema, if not, check it out on DVD when it comes out later this year. Dr Buchan requested the film’s review, and has already asked me to pre-order the DVD on my feedback alone. Highly recommended.

Well guys did I get this right. Is this one of the Best British Films this year and just one of the best films this year all round, or was I watching this through rose tinted glasses. I’d love to get a comment from you guys whether a rebuttal or an agreement. I’ll take any thing here, and of course if there are any actors that I missed that you believe gave a stand out performance, then let me know.

Now its time to move on. The next two films are ones which I have been really looking forward to since I saw the film schedules for this year.

Come back on October 15 where I will be reviewing a modern update to a classic horror icon, its Dracula Untold. At the time of this reviews publication this film is not out yet, but you won’t have to wait long. It comes out Friday 3rd October, and should be available in most cinemas