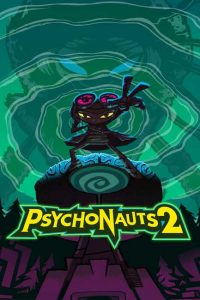 After 16 years of waiting, a successful Kickstarter campaign, and Xbox Game Studios buying the development studio Double Fine, Tim Schaffer’s long-awaited sequel to his platformer hit Psychonaughts, is finally available. Psychonaughts was a game which had you play as Razsputin (or Raz for short), where you had to sneak into a summer camp for psychically gifted kids, ran by a group of government psychic agents. This was all after Raz ran away from his psychic hating family in the circus, and became a Psychonaught. The levels are about diving into the minds of people to solve their problems and heal their emotional troubles. The levels are very creative and dreamlike with interesting ways to interpret people’s psyches, and the aesthetics inspired by Tim Burton films gives it a look that doesn’t sit well with a lot of platformers. That didn’t sell too well but gained a cult following over the years leading to a few releases on PS4 (don’t get this version unless you have a choice. It is an emulation of the not so good PS2 version), Xbox One (which is available on Xbox Game Pass) and PC release on Steam.  Psychonaughts 2 has been much longer in development than many expected, as the developers constantly added new ideas, trying to perfect the ideas they put in. It finally has released and is very much a similar game to the first, though it is beginning to feel like everything has been taken up a notch. Most of the psychic powers from the first game are back, and the majority of the cast return to reprise their roles, though there are some cool new cast members added to the mix.

Psychonaughts 2 is a fantastic platformer with some of the best level design, great art style and a great story. It really feels like it can stand with some of the great 3D platformers including this years Ratchet and Clank: Rift Apart. If the combat was a bit better I would be a bit happier, but it’s by no means bad. The only major issue I had was that the game suffers from bad pop-in that effects the graphics, though again I’ve seen way worse and it doesn’t happen too often. I do wish there was better frame rates on Xbox One and PS4 for owners of those consoles, since they do have models capable of 60 fps but that didn’t affect my score since I didn’t play those versions. The word Experience is thrown around a bit too much (including by myself, I accept that) but in this case it really is an experience that not many other games are achieving and is a big boost for first party games on Xbox. Well done to Double Fine Studios, it took a really long time and I was worried about it, but you’ve done yourselves proud and it was well worth the wait.

The game is on Xbox Game Pass so if you’re subscribed you can download all but the PS4 version as part of your subscription with no extra cost at this point in time. It’s digital only right now unless you were a Kickstarter backer, but it doesn’t take up too much space on your hard drive. It’s full price so I would really suggest signing up to Xbox Game Pass right now if you have an Xbox or PC since not only will you get this game, but almost every Xbox first party release on release day, and will cost £15 a month for over a hundred games, as opposed to paying £50 each time. Get used to seeing me say that a lot in the future, I really am happy with my Game Pass subscription right now.