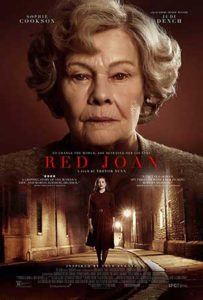 Red Joan’s story is based on a book which was, in itself inspired by a true story of a pensioner who had been outed as being a spy for the Russian Government during the twilight years of her life. It’s a fascinating idea as a story to tell, but it’s frankly one that I wasn’t entirely could be an interesting idea for a story, but I was intrigued enough by the trailer.

In the Director’s chair we have Trevor Nun, a man who has done a lot of soundtrack work and also done a lot of work for the Royal Shakespeare Company, although his actual directing credits are fairly slim, he has mostly done TV movies, including a 2008 version of King Lear, rather unsurprising given his background in theatre and I’m keen to point out the guy is a theatre director, he hasn’t really done films, in fact this is his first feature film to go do cinema since 1986 and even then it’s his first work behind a camera since 2008.

Now, Red Joan is not entirely one for one true story, it’s very fictionalised to such an extent that it’s pretty much entirely fictionalised, although they do go into detail about some of the actual true events during the end credits. The titular Joan Stanley is played by Judy Dench. Dench has just been arrested after some secrets of a Cambridge spy being released to the British Government and the film goes back and forth between her and a younger version of herself, rather than revealing how she became a part of that life, the younger version being played by Sophie Cookson, of Kingsman fame.

Now you might be forgiven, from the trailers to think that Judy Dench is a big part of this film, or that most of the film, if not half and half is told from the perspective of the older version of Joan. It’s not. Most of the film is told in the flashbacks and basically this becomes a period piece drama about the Communist society and her becoming friends with them and a romance she has with a Russian sympathiser named Leo, played by Tom Hughes, putting on a very dodgy accent!

This film is fundamentally one of the most dull films I’ve seen this year and that’s because it really fundamentally misses the most interesting aspect of this film. Judy Dench could actually be a scene stealer in this movie, but she is simply not brought on screen long enough to actually do anything. I went to this film with this idea that this is an old woman who has finally been forced to face the music of her action several decades down the line but is ultimately considered basically the ‘B’ plot! The motivations behind Joan’s actions are very weird. It’s almost this idea of ‘if everyone has access to nukes then no one will go to war with one another’ because then it’s human stupidity having a factor. But again, the film doesn’t explore that idea until down the line and never truly becomes a factor, in fact there’s not much moral ambiguity and as a result the film feels rather weird.

This was a film that I was really wondering why it wasn’t on television. As I mentioned, Trevor Nun has mostly done tv movies and it shows, this really feels like something that should have played on ITV or Channel 4 during a Bank Holiday weekend. He even shoots the film as though it’s a TV movie. Nothing about it feels very cinematic in a sense.

Now I know I’m not the first critic to point out that they have cut out one of the most fundamentally interesting aspects of this film, Robbie Collins beat me to it, but it does bear mentioning and it’s a real shame because I actually thought that Sophie Cookson was one of the best parts of Kingsman for me and this is the first chance at a proper leading role and despite the fact the posters have ‘bigged up’ Judy Dench’s role, she is the lead role in this film and she gives a decent performance for the character she has to play. My problem is that I struggled throughout the film to believe that this was a younger version of the same woman, they don’t seem to have many of the same mannerisms or speech patterns and it just seems to take you out of the experience, it almost feels like you’re looking at two different characters. Take for example, Titanic, now in that film, the two actresses who play Rose do feel slightly different, but at least they do bear some similarities leading you to believe that they are the same person and what’s more, that film kind of has an excuse, the difference is that this version of Rose is the product of several lifetime experiences after the events of Titanic. If this was intentional then they were trying to do a similar thing with this version, however, it still doesn’t quite work and again the two actresses who play Rose do have similar speech patterns and mannerisms. I know it’s hard for two actors to play the same character, I get that, but it was just bugging me throughout the entire film.

This film should also really be called ‘Sub-plot: The Movie’! There are tonnes of sub-plots in this film and most of them feel like they are only on screen for about 7-10 minutes. I have a feeling that this script was messed around with several times during the production. As a period piece, however, it’s actually somewhat decent, authenticity and accuracy really seems to be a factor they have put a lot of effort in to and it’s one of the things that I can really praise about the film. Red Joan is, at the end of the day, a rather dull film. This has been one of the hardest films for me to review, simply because I have left the cinema with no real feelings on the film, it’s really is as bland as they come and it’s a real shame, considering that I actually like the cast, and everyone involved. Trevor Nun puts in some effort, but he feels like a director who is out of his depth in this position and as a result it doesn’t really feel like a film that should have gone to cinemas. It’s not a total mess, there are aspects of it that work including the fact that the actors are giving decent performances and the period accuracy is really paid a lot of attention to, but I think the film has more to say than it really does. It tries to go into some moral ambiguities but doesn’t really succeed at them. This is not really a film I can recommend as a result, this is one that you might want to watch if it turns up on TV one time, maybe!

Well, that’s it for me this week. Next week, it’s the big one for me. The Marvel Cinematic Universe has been leading to this point. It’s time for Avenger’s: End Game.