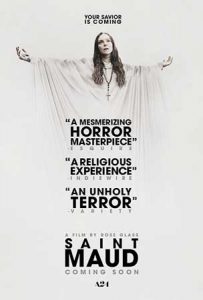 Saint Maud is the latest indie horror film directed by Rose Glass who also wrote the script, and this is her first feature-length film having directed short films prior to this. And it’s great that it’s finally come out after its very big success at London Film Festival last year; I’ve been very interested to see how it turned out. The weird thing is about this film is that I would say not to go into it expecting your typical jump scare horror film. If you’re going in for that, you’re not going to be too satisfied. There’s a film that Saint Maud reminded me of—not necessarily in terms of its themes but of its pacing and tone—The Witch, Robert Eggers’s 2015 film.

Saint Maud centres around a born-again Christian nurse named Maud, played by Morfydd Clark, who’s privately taking care of a dying dancer named Amanda, played by Jennifer Ehle, and Maud’s belief that she will save this person in the hour of her death. You know all those exorcism films that act out demonic possession? This is almost a very similar film, but it’s much slower in pace, much better with its timing, knows when to have a silent moment (which so many horrors film now don’t know how to do), and rather like The Witch it’s very up-in-the-air about what exactly is happening. The film is relatively ambiguous. But don’t go in thinking you’re getting a film about gods and devils; the film really has one theme, which is one that a lot of people are going to identify with right now: isolation and loneliness. It’s not exactly a subtle theme – the film does spell it out quite a few times, but Maud is a character we don’t see having a lot of human interaction. Most scenes that don’t involve Amanda involve her by herself in a rundown flat confronting the situation in her past that brought on the moment that would turn her towards her faith. And Maud is almost becoming obsessive over her faith, to the expense of others and her own self-destructiveness. It’s not a commentary so much on faith; it’s more a commentary on our obsessions isolating us, something I haven’t really seen in a film like this.

I heard a review recently from Mark Kermode where he talked about how the best horror films have an emotional level to them and I think this one definitely achieves that. Maud isn’t exactly a character you sympathize with but you certainly don’t despise her either. It helps the fact that the film plays with dual realities which may or may not be real, which certainly work, and for once they do it in a very subtle way. And the cinematography really helps too. This film looks freakish, and when Maude is deep in thought by herself the film is often shot to make rooms look bigger and more open, whereas they look more enclosed when she is around other people, the exception being Amanda who she sees herself as a saviour towards.

And if there’s anything that the film also nails it’s the score – my God, this film has one of the best horror soundtracks I’ve heard in a long time! It’s commendable how well the soundtrack works. And if I can say, the two central performances are excellent. It’s a shame that there likely won’t be an Oscars next year because Morfydd Clark should definitely be up for Best Leading Actress – this is one of the most stunning central horror performances I have seen in a long time, and she really nails the role that is needed. The performances are good around the board but hers really does deserve highlighting. If this film didn’t have that strong of a central performance it might have collapsed in on itself, because my biggest criticism with Saint Maud is the fact that it edges on the side of pretentiousness. It doesn’t fully go off the cliff fortunately which is why the film is so good, but there are a couple of occasions where it delves into the style of the writer bouncing up and down asking, “What does it all mean?!” while I’m thinking, I know what it means; just get on with it. Fortunately, it dials it back quite significantly. This actually feels like a film that trusts its audience, which a lot of films like this I fear don’t do.

Now if there’s one thing Saint Maud kind of fails in it’s the time when it has to do special effects – they’re a little ropey at times. A couple of them do work, such as the spiral effect, but there’s a couple where I thought you could tell the film had a low budget. But the spirals, the imagery design, and the general tone made me think that that Rose Glass must have read or is a big fan of Junji Ito’s work. If you’ve read a lot of his work this is going to be very, very familiar to you as it has a lot of similar imagery and even some themes from some of his books. If you like this movie, I would really recommend checking out his work.

There’s no other way of putting it: Saint Maud is one of the best horror films in recent memory. It’s a fantastic movie of suspense and drama. It doesn’t overly delve in dark themes but instead goes for more realistic ones, making the horror feel even more real. You could definitely believe something like this could actually happen in some form or another, and that’s what really nails it. If you can go to a cinema, this might be one to go back for. It’s an excellent choice to be a Halloween film. And I don’t think it will take too long to come out on home video.
Calvin – Nerd Consultant
Share This Post: