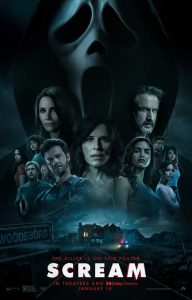 The problem with doing these reviews is I’m often dancing around spoilers, so as a result I’m kind of put in a position where I can’t talk about everything I want to talk about, so you probably would get most of my thoughts of a film if you’ve seen it yourself and had a private conversation with me. Scream is really hard to talk about since you kind of have to spoil a whole series of films to talk about this one. Scream, despite its reboot-sounding title, is a full-on sequel. It does follow on from the events of Scream 4 though it does appear to have ignored the TV series; that’s where I kind of agree with them. Let’s face it—that TV series did not do much. I also found it a bit of weird much of the time. It definitely had star-making performances for many of the original stars, and the original actually used brilliant marketing. Courteney Cox certainly was already famous because she was cast in Friends but this definitely helped her out, and it really propelled the careers of Neve Campbell and David Arquette, the latter of whom would use that success a few years later to contribute to the destruction of WCW (but Arquette’s already apologised enough for that and I think we need to leave him alone about it).

Now, this Scream movie does take place ten years after the events of Scream 4, and it relates down to the Stab movies, the fictional movie series within the Scream universe that was based off the killings in the original film. With those films getting a nostalgia pop, a new Ghostface appears to have popped out and is targeting people all over again, causing a woman named Sam, played by Melissa Barrera, to return to her home town with her boyfriend to protect her sister. Going and looking for help, they try to enlist Officer ‘Dewey’ Riley, played once again by David Arquette. Investigating the scenes now are, of course, Gail Weathers played again by Courteney Cox, and Sidney Prescott played by Neve Campbell. Now, I will not classify those as spoilers since they were given away in the trailer. And of course, I have a rule: If it’s in the trailer, it’s fair game to mention it.

I kind of went into this Scream movie, which is really Scream 5, with some expectations. Granted, Wes Craven is long dead and the film is dedicated to him in the end credits, but this time it’s been handled by directors Matt Bettinelli-Olpin and Tyler Gillett who helmed the movie Ready or Not. Ready or Not was nothing special but I quite liked it; it was definitely a horror film that had a sense of humour which, again, Scream always has too. Wes Craven basically created the franchise to be a pastiche of the slasher genre that he kind of helped make mainstream since he created A Nightmare on Elm Street. Wes Craven at that time was kind of going quite meta with his films, especially considering that he also made a new Nightmare around this time. And between those two films, I have to agree with Mark Komode on this one: Craven really gets to the heart about why we enjoy horror films and he also manages to make them quite scary. Go back and watch Scream, the original from 1996—it’s aged remarkably well. They’re basically slasher films essentially mixed with a murder mystery since, well, Ghostface doesn’t keep coming back, it’s just someone new under the mask each time.

This time is no different; there is a mystery to solve about the identity of Ghostface and it does kind of keep you guessing, but I got the right answer pretty quickly. Or at least I partially got it, so it’s not too difficult. Now, this film is referred to by the cast members themselves as a “requel”, a sort of hybrid of a reboot and a sequel, not a word they needed to invent for this because we already have a term for that: It’s called a soft reboot. Essentially you bring back legacy characters, and it is taking place within the timeline but you get a mostly new cast. And the film does reference what they’re doing with this film’s production way too much. Scream has clearly been kicked around the release schedules and put in a January position to try to avoid competition, and it’s clearly been successful since it has knocked Spider Man off the top spot in the box office. But wow, it is not deserved.

Scream (2022) is not a terrible film but its two big problems are that it’s way too involved with its meta commentary and it doesn’t really have much to say about anything. As I said, the original film really gets to the heart of why we like horror films. The character of Randy in the first film is a living personification of that, to such an extent they even gave him a niece in this film called Mindy who basically takes up his position. But wow, Randy was a bit insensitive at times but he wasn’t this mean-spirited. I will admit I actually grew to like the character; she has a lot of good traits later down the line, and Jasmin Savoy Brown really commits to the role and even gets some of the funniest lines. But there’s a conversation in the middle of this film where I’m basically saying, ‘Read the room!’ It does have some interesting ways to tie back to the first film but I think it also kind of misses much of the point of the first film. It’s also quite snobby at times or at least I find it that way. It’s what I like to describe as a “reverse-snob”; you know, the sort of people who say you’re up your own arse because you say you like something that’s often considered high-art.

In this case, they take a shot at what they call “elevated horror” which is a term I really despise, not because it downplays the films it refers to; I mean, the films they reference in this one, for example, are The Babadook, The Witch, It Follows, and Get Out, which are all some of my favourite horror films of the last few years and in fact some of my favourite films of the last few years period. But it really undermines what some of those originators of the genres were going for. They did have thematic sense; they just became out-and-out slasher-fests due to the combination of audience demand and financial pressure from the studio. Nightmare on Elm Street, for example, is a whole thesis on the sins of the parents being passed on to their children. Whilst it’s done in a joking sense, it does kind of want to take a shot at those films which is a real shame because, again, Scream was actually very thematic when it first came out. It does kind of have something to say about why we are kind of obsessed with violent deaths, and if you’re about to say, ‘I’m not,’ check your Netflix history—I guarantee there are at least two true crime documentaries in there about either a murder spree or a single high-profile murder.

Scream (2022) also seems to want to talk about toxic fandoms and obsession with film franchises, especially to do with internet commentary on films, most proliferated by the fact that one of my favourite YouTubers actually has a cameo, James A. Janisse from the channel Dead Meat. If you haven’t checked out his channel, I really recommend it. He does an excellent job creating comprehensive kill-counts in movies in such a way that I actually hear his sound effects whenever I go to watch a horror film now. And he does some excellent analysis on horror films as well, and also gives you excellent behind-the-scenes looks. It’s kind of weird considering they didn’t use his actual YouTube channel, they kind of made up one for this and had him act really obnoxiously. Granted, there are a bunch of those kinds of critics on YouTube but I wouldn’t put him in that category.

I also kind of feel like the legacy cast for this one had a gun to their back to be in this film because none of them are in it that long; the only one who has an extended amount of time on screen is David Arquette who, granted, is one of the best things about all these movies. But it’s kind of a shame. Granted, it gives a bunch of time for this new cast to shine but, I’m sorry, I’m not a fan of most of these characters. They at least make the characters smart again for the most part though not too smart, but they’re also kind of all over the place. I don’t think they really knew what their character traits were until the day because they can never sort of have a personality and stick with it. What’s more, the gags are just not that funny and there are way too many of them. In the really good Scream movies, the humour actually complements the horror; in this one it actually kind of distracts from it, and I don’t think the two blend too well together.

Scream (2022) tries to be a love letter to the fans of the series but it ultimately kind of falls down to an extent, and I think it’s just the fact it’s almost afraid to not be constantly referencing what’s happening—which gets really annoying fast—and too afraid not to have a “ha-ha” moment. As a result, it’s a film that’s just kind of there. It’s great what they tried to do and I think it’s a good idea in theory but it’s not executed very well. While I think overall it’s a decent attempt, I don’t think it’s a well-executed film and it’s not one that I really would recommend right now unless you are a massive fan of the Scream franchise, but I suspect you’ve already seen it if that was the case.
Calvin – Nerd Consultant
Share This Post: