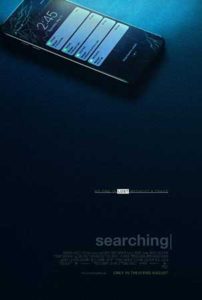 Searching is the directorial debut of Aneesh Chaganty and is his first feature film to date. The film did very well at The Sundance film festival and when trailers came out for it, it suggested a conceiving concept. The concept is not entirely new and I will be getting into more detail about it down the line, but with not much else to say here let’s just dive straight into it.

Searching is a film set entirely through screens, mostly computer desktops and mobile phones, most notably FaceTime. The film is about David Kim (played by John Cho), who after the death of his wife is beginning to struggle communicating with his daughter Margot played (by Michelle La). However, after he misses a series of FaceTime requests from Margot, he discovers the next morning she has not been to class, and gone missing. He joins in on the investigation along with Detective Vick (played by Debra Messing), to search for her. As he looks through her social media to ask her friends it turns out he may not know as much as he first thought about his daughter and she may have been keeping a few secrets from him herself.

You may recall a reviewed a film in 2015 called Unfriended, it was one of the worst films I saw that year, the main reason for that was once you took away its gimmick, there was a pretty lame and generic horror film. Now Unfriended is a comparison seeing as they are very similar, most of the film takes place in a computer screen, Unfriended using Skype and Searching using FaceTime to tell its story. The comparisons don’t stop there seeing as both films share a producer. However, unlike Unfriended the thing that makes Searching a much better film is because it knows it’s a film. I don’t think this would count as a found footage movie since it doesn’t really play like one. The film is edited like a film and it plays like a film, at certain times the camera zooms in to certain points and there is an actual score over the film, plus there is no static setting, like a found footage film would normally have. As a result, the film does get to cheat on occasion, which Unfriended also did, but with Unfriended it was less forgivable, given that it was shot to be like a continuous Skype conversation, so when a character clicked away to another window on the laptop and we couldn’t hear the ongoing Skype conversation, it become more noticeable. Skype might not have given their license but Apple is certainly all over the place, now don’t worry Windows users, a couple of people do use Windows computers as well, in fact one of the early desktops that shows the exposition is a Windows XP computer, for all you people with nostalgia for that.

The film uses excellent use of its computer screen ideas, for example we see the characters using internet searching and typing on iMessage really applies a window to his mind. We see him typing words, only to delete them later and we see his frantic searches. Several people have given their licence for them to use their products, for example: Facebook is very regular, YouTube turns up in the film, Spotify is used and Pokémon also gets a lot of licensing which you will read about further down. iPhones appear to be the most used technology in the film. The film does invent a streaming site for some its own plots called Ucast, which kind of works as sort of a hybrid between Snapchat and live streams on YouTube. It is where some of the biggest events in the film happen, mainly because it is where Margot films a lot of her inner thoughts that she has been keeping from her Dad, which play a big role in the investigation.

You might have noticed I’ve not really been talking about the plot, you might have thought that’s because the plots rather thin, but it’s actually not. Well, at times it is predictable, but it does do what a thriller should do, and keeps you guessing. The film is constantly keeping you in suspense. There are several times you think you might be on to something, only for it to be dashed a minute later. The film is constantly playing with your expectations. The film does present a lot of ideas, for example the trailer points out that one idea is Margot might have run away from home, but then there are also other factors which suggest the opposite, such as them finding her Pokémon key chain.

The film is actually an interesting psychological look into a family and it really confronts on our relationship with technology. As a result, the film feels like it’s a fly on the wall documentary. It does show a darker side of the internet later on down the line as the investigation becomes more public. The films mystery really ramps up more and. More, especially when it seems to be getting really dark. The film does a good job keeping its answer from you, throwing several red herrings until it reaches the conclusion. Put it this way, I actually guessed the solution to the mystery and then retracted it, only to have been proven correct the first time.

Now the film is very well researched when it comes to how the technology is actually used, so you won’t be watching the film thinking that’s not how you do that or that’s not how that works. Everything is played out very well and the editing in the film is extremely good. It uses traditional filming techniques mixed with the pretty new gimmick very well, as a result it kind of rises above it being a gimmick.

The performances are excellent. Debra Messing plays an excellent role in this film but John Cho should definitely be nominated for best actor for this film at the Oscars.

The film is just excellent all round. Searching is an amazing thriller and the film is not bogged down by a new film style that is pretending it hasn’t been done before. Its biggest strength is that it doesn’t pretend to be real. It knows it’s a film and acts like a film, delivering a much better story as a result, the mystery suspense will keep you guessing throughout most of the film and the acting and use of technology are just excellent.

It is a film that manages to convey its story very well with minimalist dialogue and brilliant use of its running time. It does go on a little too long but it never out stays its welcome. Searching is one of the best thrillers I have seen in a while and one of the best films of the year so far. Despite the fact you don’t need to see this film in a cinema, I would recommend seeing it in that environment as soon as possible, you should not wait to see this movie.

Well that’s it from me this week. Next week I am going to review another spin off of the Conjuring franchise, with The Nunn.

With all that being said, I hope you’ve enjoyed reading this review as much as I enjoyed writing it.
Calvin – Nerd Consultant
Share This Post: