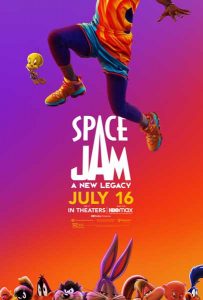 >The original Space Jam is not a great film in my opinion. It has its moments, don’t get me wrong, and it’s at least decent in the fact it didn’t take itself too seriously. But, as a whole, it’s not the greatest film ever; it’s probably not even one of the better Looney Tunes films. But it has obviously built up somewhat of a cult following. And Warner Bros—keen to cash in on nostalgia—have made a brand-new film, Space Jam: A New Legacy, hiring director Malcolm D. Lee for the project, someone I’d never heard of, though from what I gather one of the things he’s known for is Scary Movie 5 and doing a bunch of wedding comedies… We’re already off to a bad start. And instead of Michael Jordan, to update it this time it’s LeBron James.

Now, the plot this time round is that Warner Bros has created an algorithm for their new online supercomputer called Al G. Rhythm, played by Don Cheadle, who becomes obsessed with LeBron James, and after having his offer rejected by LeBron sucks him and his son into the supercomputer like it’s Tron and tells him that they both are going to form basketball teams for the fate of both him and his son and everyone watching the livestream. And LeBron forms a team with the various Looney Tunes characters who get back together after they’ve been tempted out of their own area to go work in other Warner Bros properties. If this sort of thing is sounding familiar to you, it’s basically because this film is ripping off Ready Player One, leading to the tagline ‘Ready Player Dumb’ being used in several reviews. And they’re right—Space Jam: A New Legacy is possibly the worst film I’ve seen this year so far.

Where do I start with this one? How about the fact that for a film that’s putting the Looney Tunes front and centre again, they’re never allowed really to show their personalities. They seem to want to just put them in various movie parodies with no sense of why they’re there. Yo Samdy Sam is in Casablanca because his name is Sam but they don’t do anything with that. Elmer Fudd ends up in Austin Powers because he’s short and bald, and that’s the gag. And there are various other examples that are like that. This whole thing is a massive advertisement for Warner Bros and their products, particularly their investment in HBO Max, hence why Game of Thrones is rather front and centre. By the way, Game of Thrones coming anywhere near a U-rated film is already making me raise eyebrows. And there’s also a cameo from another animated series that I forgot Warner Bros owned, featuring some characters who should really be nowhere near a U-rated film, and features the voice actors giving one of the most forced cameos I’ve heard in a long time. Not to mention, of all the Warner Bros properties they throw in this thing, most of the ones on the sidelines you can clearly tell just look like cosplayers, and they don’t even look like they’ve put much effort in. I’ve been to conventions that had much more convincing lookalikes than this—just hire those people! You’ve put all this effort in to digitally impose the Looney Tunes in films that you own, so why not go that bit further and actually employ some more of that CGI? Oh yeah, I forgot: all the stars are not putting it in their contracts so you’re not allowed to do that.

There’s also the fact that this film has really bad villains. I don’t know how Don Cheadle was directed to act in this film because he’s a good actor but he can’t even ham his way out of the bad writing in this one. The way they force in the WNBA and NBA stars into this is really forced. LeBron James’s son—incidentally not played by his actual kid—is an up-and-coming videogame designer creating his own tech and actually scans the data of their plays into his phone for his videogame, which AL G. Rhythm then uses for his team. Anyone who’d actually been involved in videogame design will tell you if you’re doing this you have to do days worth of motion capture; you can’t just scan it into a phone. Also, that is a dumb way of getting a load of NBA stars into this thing. They don’t even come up with cool designs: they just make one of them like a spider, one a snake-woman, and one’s made of water. And they’re not even playing proper basketball; they’re playing this weird invented videogame version of basketball which has a ludicrous scoring system because it’s based on LeBron James’s son’s videogame. Which means if you had any interest in the sport, you can’t follow what’s happening!

I don’t know what any of the writers were thinking (this film has 6 credited writers) but they made LeBron James incredibly unlikeable early on, and they also have several lines that prove how derivative this whole thing is. LeBron James actually says at one point that athletes and acting never really goes very well. Yeah, you’re proving it—your performance is terrible. Michael Jordan in the first film was also kind of wooden but he actually kind of leaned into the absurdity of everything. LeBron doesn’t really do that. It also really doesn’t help that this film has 6 writers; it’s a clear example that too many cooks spoil the broth. It’s a ton of ideas all chucked in together, and the whole thing really exists as an advertisement with some of the most blatant product placement I’ve seen in a long time. Nike is flashed constantly on the screen. Hell, LeBron James crashes into the Looney Tunes world and actually creates a Nike-shaped crater, though obviously Warner Bros is the big advertisement part of this film and, man, is it so blatant what they’re doing. I actually saw a joke article that said a “skip ad button turns up at the beginning of Space Jam: A New Legacy and actually skips the entire film”, and I completely agree with that joke.

What’s more, I don’t understand why the Looney Tunes are here; they don’t really do anything. Modern writers really think the Looney Tunes were just these insane, constantly moving characters but if you actually go back and watch some of those old clips, while movement and physicality were big factors of what made them so funny, they also knew when to tone it down. People think of Daffy Duck as flipping out but the whole point was that he would appear calm and collected most of the time, and the joke was seeing the transition to that more wigged-out persona as things constantly go wrong for him. Daffy is one of the funniest Looney Tunes characters ever but he’s got nothing to do in this. They put him in a coach role but he only really gets one or two funny moments. And some of them don’t even get that. For example, I can’t think of one thing Elmer Fudd did that made me laugh, Sylvester and Tweety are so pushed to the sidelines I don’t understand why they’re here. And yes, you can easily have the zaniness mixed in with the basketball like the first film did but it really doesn’t work this time. The first film actually did a pretty good job working off the personalities of the characters, and it only really chucked in a pop culture reference once which was a Pulp Fiction reference. But this film? The game actually stops in the middle for Porky to have a rap battle for no reason, and they actually score some points from that. I don’t even understand why they hired Zendaya to play Lola Bunny in this one as she doesn’t really get anything to do.

As a result, this film is strange, bizarre, and I just hated watching it. Space Jam: A New Legacy is a Warner Bros advertisement first and a movie second. It doesn’t really care about its subject being the Looney Tunes and doesn’t really make its athlete-turned-actor likeable. It’s a mess of a film with terrible 3D CG animation that takes all the expressiveness out of the Looney Tunes who aren’t even allowed to really give their all, leading to one of the worst films I’ve seen all year. It was a drag to get through this. Save your money—this is not the film to take your kids to the cinema with.
Calvin – Nerd Consultant
Share This Post: