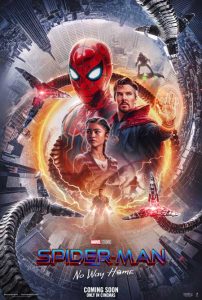 Spider-Man: No Way Home is the third movie in the Marvel Cinematic Universe to feature the character front and center, and is once again directed by John Watts. At one point it looked like it was never going to happen with the dispute between Disney and Sony over the ownership of the characters’ film rights. That being said, both studios did the smart thing and came together to relicense the character for future films. And with Sony now backing the project in a full way, they revealed in trailers that this was essentially going to be a film that would bring back many of the classic villains from previous Spider-Man continuities that Sony Pictures made.

Now, I’ve held off doing this review for ages—I actually went to see this film on opening day but held off because I wanted to give time for people to experience it. Obviously, despite the fact it came out around the time the Omicron variant of COVID was ravaging many parts of the world, that didn’t stop people going to the cinema. It was the highest grossing film of 2021 and the highest grossing movie since the beginning of the COVID pandemic! So, while this will be a spoiler-free review, I’m certainly going to be implying some things about the movie; it’s simply impossible to talk about the film without doing so.

This one plays off the ending of Spider-Man: Far From Home. No Way Home opens in fact on the post-credit scene that was shown with J. Jonah Jameson—once again being played by J. K. Simmons—playing Mysterio’s message which fools people into believing Spider-Man was responsible for the attack on London in the end of that film and revealing Spider-Man’s identity of Peter Parker, which causes Peter’s friends’ lives to get worse by association. Peter goes to Dr. Strange, his role being reprised by Benedict Cumberbatch, in order to create a spell that will make the whole world forget that Peter Parker is Spider-Man. However, Peter screws around with the spell which causes it not to work and it starts bringing people into the MCU dimension, —as the trailers have already revealed—the first of which being Dr. Octavius played once again by Alfred Molina. And when they find out what their fate will be, they are in no mood to be going back to their dimension.

I feel really weird tiptoeing around the spoilers in this film considering that anyone who has spent any time on the internet since it was announced knows most of the cast for the film and who was reprising their role etc. There are a few surprises in here but overall, not much. The biggest problem that’s been lambasted against most of the MCU Spider-Man films is that they don’t really feel like Spider-Man stories but more like Iron Man spin-offs, certainly something that I think is not an entirely unfair criticism. But it’s certainly not a criticism that can be lambasted against No Way Home; it really is a Spider-Man film through and through and feels like a celebration of all the films that came before it. And while I don’t want to give too much away, it does feel like this is the film after which you could go several years without a new Spider-Man film as a result. That being said, I am not at all objecting to the fact we’re getting a sequel to Spider-Verse next year.

It also feels really interesting to see some of these characters come into the MCU now. Let’s face facts—many of these are characters from films that came out 20 years ago; there have been significant rises in technology in that time. For example, the first fight scene between Spider-Man and Doc Ock features tons of choreography and effects that you couldn’t have achieved in Spider-Man 2. And it really feels like a film that examines the philosophy of Spider-Man: the idea that with great power comes great responsibility, and it achieves that in a great way. It does have some excellent action sequences as well. This film really takes full advantage of Spider-Man’s power set and allows for the full use of these characters’ power sets also; some of them are actually improving between films. Seriously, I actually would say to go back and watch some of those old films as the action scenes don’t look as good as you remember, particularly looking at the first trilogy of Spider-Man films.

There are some continuity gaps and some characters don’t return. There were a few of which it surprised me they either weren’t asked to come back or were unavailable to. These aren’t just any old franchises; this is Spider-Man! This is probably one of the biggest roles you’ll ever take on. And something else that surprised me is they actually managed to continue character development from previous films, and some of these characters got development in ways that I didn’t realise were needed. It’s genuinely astounding. That being said, if you’re expecting this to be a big part of the Marvel Cinematic Universe and what’s going on with that, I would say don’t expect too much; there are not much tie-ins to what’s being going on post-Avengers Endgame. Though there are obviously other mentions, like Dr. Strange and some of his cast show up in the film. That being said, Dr. Strange is not in as much of this movie as I think the trailers implied he was going to be. He does get some of the best moments in the film but the team were wise enough to keep this really tied down to Spider-Man and his cast.

Most of the actors are pretty good. Tom Holland gives probably his best performance of Spider-Man so far; Zendaya’s pretty good; Marisa Tomei once again does a very good job as the MCU Aunt May. And getting J. K. Simmons back as J. Jonah Jameson was an excellent choice. They don’t overdo it with him and he doesn’t have as much personality as he’s had in previous incarnations but he never suffocates the film. And I actually really like the direction they went with him: They borrowed a bit from the recent Spider-Man PlayStation games and turned him into an Alex Jones-type figure. In fact, they really go very deep into the parody of InfoWars in general, mimicking the famous out-of-nowhere ads for supplements which have been criticised for having dubious medical credentials being used to finance the show. There obviously are some plot holes in the movie towards the end, but again I can’t go into spoiler detail, especially considering one of them actually relates to a post-credit scene. But trust me, when you really think about it it’s kind of weird and it also kind of doesn’t really work.

And that’s really as far as I can go with talking about spoilers. If I was going into spoiler detail though, there would be a lot to gush about with this movie. When you can see the film in true detail and know everything about it, you realise this is probably not only a great live-action Spider-Man film, it might be one of the best MCU movies to date. It’s really that good. And as a celebration of all the Spider-Man movies, it does an excellent job, in a way that feels organic as well. Spider-Man: No Way Home is excellent—you really should check it out if you haven’t had a chance to see it yet. I would recommend trying to see it as soon as possible to avoid spoilers if you haven’t been spoilt on some of the big moments already. If you can, go and see this in a cinema. And that of course is if there are no restrictions in place by the time this review comes out.
Calvin – Nerd Consultant
Share This Post: