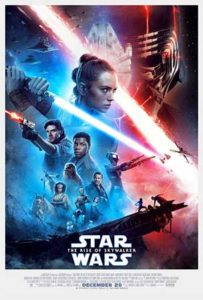 So, episode 9 finally came out and after a long break, I finally give my opinion of it. Well, this one has actually had a slightly troubled production. Episode 8 was not too well-received; it’s clear Disney were getting worried about this being a trilogy of flops. So, as a result, part way through production, writer/director Colin Trevorrow who directed Jurassic World was booted off the project and JJ Abrams was brought back in to finish off the trilogy he started, having previously directed The Force Awakens.

I personally thought this was a wise decision since Abrams probably would deliver a good movie. Even so I was slightly apprehensive at points since, well, it’s very hard for lightning to strike twice. Now, for the purposes of this review, this is going to be a non-spoiler talk. I’m also going to be completely going on my opinion since I’m already aware at this point that this film has divided audiences right down the middle. Here are my thoughts though as it goes, and also, to avoid spoilers, I’m also not going to be giving a plot synopsis since I know a lot people haven’t seen the film and it’s really best to go into this film with not too much knowledge.

If anything, I actually think both Star Wars and the recent Avengers trailers have been the right way of advertising a film, and I’m hoping that example’s going to be followed in the future. Rise of Skywalker has to be a conclusion to this trilogy and has to wrap up a lot of story elements, and it does this by almost entirely ignoring The Last Jedi. I mean it, a lot of the plot threads from The Last Jedi really don’t get followed up on. But it’s not as if there’s no good here. Some excellent stuff has come about. There are all sorts of story arcs going on for all the main characters, and in fact, there are actually some excellent action scenes.

One of the things that I appreciate for this film is that by this point in time, the film makers finally have dropped all the crutches of the old cast and really given this film over to the new one. There’s obviously some returning characters – there’s Lando Calrissian once again played by Billy Dee Williams who is revealed in the trailers, and of course, the trailers also gave away that Emperor Palpatine in some capacity in this one. I won’t spoil exactly how he’s back but I’m just glad that Ian McDiarmid is still excellent in this role. If anything, the arc that seems to have really been followed and came to an end is Kylo Ren and Rey’s arc, both of which are somewhat excellent in how they conclude.

Yeah, I actually like Rise of Skywalker. Is it my favourite of the trilogy? No, at this point I’d still say that’s Force Awakens, but Rise of Skywalker feels like an excellent way to conclude the franchise. There are a few turns that I thought I didn’t mind myself, I actually thought they were alright, but Rise of Skywalker really works on quite a few levels. This is certainly going to be a divisive film; I’ve already heard some people don’t like some of the things that I like about the film, which is pretty much as far as I can go whilst being incredibly cryptic. But I’m also kind of aware that some things don’t feel entirely thought out. I know a lot of people say this is just a bunch of set pieces tied together but if you actually go back and look at the original trilogy, that was kind of what happened in those movies. Yeah, I’m sorry to burst your bubble on this one but I think you’re ignoring the fact that all the Star Wars films are kind of a bunch of loose plot threads that somehow tie together by the end. I mean, look at Empire Strikes Back. In that film, you’ve got The Battle of Hoth which then leads to Luke leaving to go and train with Yoda, The Misadventures of The Falcon Crew, and then it all leads up to everyone converging in cloud city. So, it’s not as if this film’s been doing much different that hasn’t been done in previous films.

I actually think some of the best sequences in the film have been involved with some new aspects of The Force that have been introduced. There are some amazing sequences, however, I also get a sense that the film’s kind of rushing for time. The biggest problem with this current trilogy now that we’ve seen this conclusion is that the films are not brilliantly connected to one another. I know this isn’t a problem in the original trilogy and the prequel trilogy, but it feels even worse in this trilogy, which is that the films don’t seem to connect to one another very well. It’s almost like there’s a bunch of gaps. But it feels like now more than ever, that these are going to be filled in by expanded universe novels, comics and video games, which I wouldn’t mind except for the fact that Disney at this point in time doesn’t seem to want to really be bothered to expand this Universe. If you look at most of the spin-off material that’s coming out at the moment, it’s mostly being set prior to the original trilogy or during the events of the original trilogy, and it extends to the most recent video games taking place after the events of Revenge of The Sith, so it seems like the fact that Disney’s writers and directors and most of their staff do not seem too interested at this point in time on expanding on this timeline, however, I’m fairly convinced that at some point, we’re going to get more of an extension.

Rise of Skywalker does still have much of the original cast returning, including some archival footage of Carrie Fisher, who seems to be playing Leia from beyond the grave, that’s how good the special effects are to keep her in the film. However, her untimely death has meant that some of the badass plans for Leia that they had in the movie now kind of have to be put to one side, which is rather unfortunate. I mean, as I said, there are a couple of factors of Rise of Skywalker I didn’t like, but again, it would be complete spoilers to talk about them, so I’ll just say for now there’s a few aspects of this film where I thought they didn’t stick the landing, but overall, this film feels a lot more focused and a lot more like a clear vision has been put in place. The question now really comes down to how we will look back on this trilogy when we’re several years down the line. I also want to point out that for a conclusion, it doesn’t half seem like the door’s open for the franchise to continue. Yeah, don’t be surprised; Disney’s going to milk this thing for all it’s worth considering how much money they’ve spent on it.

Rise of Skywalker is a film that doesn’t quite stick the landing on everything but overall, I actually think it’s a pretty good conclusion. There are some excellent action scenes, it’s a very good, crowd-pleasing movie and it definitely feels like an improvement over Last Jedi. I actually thought Last Jedi was going to get better upon this film’s release, but my opinion’s actually gone downhill considering that this film seems to have really shat all over it. JJ Abrams’s direction really has salvaged the franchise, and I’m interested to see where they will be going down the line. Another sequel trilogy was planned but has been scrapped at this point in time, but I wouldn’t be surprised if an announcement comes out within the year that there’s another film project in the works. We really have not seen the last of Star Wars, get ready for more of this.

Well, that’s it for me for this week after my extended break. Join me next week when I’ll be giving my thoughts on my top 10 best films of 2019 and either my top 5 or top 10 worst films of 2019; I haven’t decided yet if I’ve seen enough films that really deserve that moniker. With all that being said, thanks for reading this review, I hope you enjoyed reading it as much as I enjoyed writing it.
Calvin – Nerd Consultant
Share This Post: